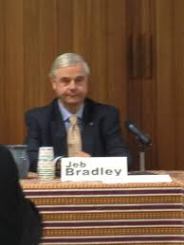 It stuns us that a political party in a democracy, whose prospects depend on the good opinion of voters, would think it had anything to gain by blocking 58,000 uninsured people from obtaining health insurance and thus improving their health. Never mind that to deny people access to proper health care is unconscionable, immoral; does it not make economic sense for people to live healthier lives and thus miss less days of work on account of illness ? Or perhaps become able to work at all ? What conceivable policy objective is gained by blocking this outcome ?

Unhappily, the New Hampshire GOP legislature’s refusal is no unique event. Since September 2008, when the GOP-controlled House tried to block President Bush’s TARP Program — which prevented the collapse of our entire economy — the national GOP, with few exceptions (Chris Christie, Jeb bush, and John McCain especially) has become merely an obstacle. “Block this, stop that.” Stop America from moving ahead. Every act, almost every speech, that the current GOP has made or said defies us : “We will stop you, people, from doing anything to improve your lives.”

NO to sensible gun control legislation. No to pursuong unibversal hrealth care insurance. No to ther food stamp program by which millions of us love. no to women’s pay equity. No to the Treaty on Disabilities. No to President Obama’s nominations to Federal Courts and Federal Agencies. No to immigration reform. No to reforming “stand your ground” laws. No to Voting Rights updates.

The Federal government ? No to it, too.

Yes only to putting governement into your vagina and into your sex life.

As we said : this is not a policy agenda. This is an obstacle merely. This is contempt, for you and for us.

It has happened in America before, and every time a political party has retreated to obstacle status, it has meant pain and suffering to millions of Americans.

It happened in the 1920s, when business tycoons and their political mouths blocked anti-union legislation; and again in the 1930s when a reluctant Supreme Court blocked FDR’s New deal reforms.

It happened from 1880 to the 1960s, when Southern Democrats blocked all attempts to making lynching a Federal ctime and to accord Black Americans the voting rights and other civil rights that we thought that the grievous Civil War had won.

It took almost 85 years of injustice, torture, killing, and intimidation before finally that block was removed.

How long will it take America to remove the many blocks set up by the current GOP ? How many Americans will suffer and even die because ? Only time will tell. Hopefully it will not take almost a century to remove the block THIS time.

Meanwhile, 58,000 New Hampshire residents wait for health care insurance and the healthier, more fruitful life that we all want.