PART TWO : DID HE REALLY DO THAT ? 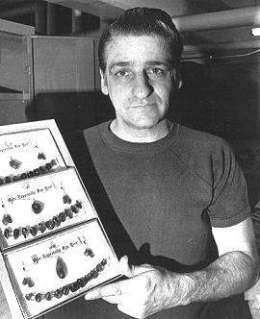 how COULD he do that : Albert deSalvo

On the very morning of my writing Part II of this series comes the news that Albert deSalvo, who in the years 1962 to 1964 scared every woman in Boston as the mysterious “Boston strangler” and was eventually convicted (though only of an unrelated rape) — he died in prison long ago — has been confirmed by DNA evidence to be, in fact, the Strangler. And so revives to us in Massachusetts the memory of one of our state’s most vilified criminals ever. A man who invaded women’s homes, raped them, and then strangled them : it happened to thirteen in all — eleven by the “Strangler” —  though he was convicted not of any of these but of another rape entirely.

The crime amazed us. This wasn’t murder as such. The strangling was only the wrap-up of crimes beyond understanding.

Murder, we all understand. Is there anyone out there — well, HARDLY anyone — who hasn’t at some point in his or her life said, or wanted to say, “I will KILL you” ? We get angry. Anger is the crank that starts most engines of violence. Most of us control the anger, stifle it, move beyond it. Still, the desire to kill is there, dormant, waiting.

Other crimes of violence are harder to understand. Most of us do NOT have the desire to rape, or assault, or commit arson or mayhem. Who says, or wants to say, “I will RAPE you” ? Or “i will burn down your house” ? Not very many of us. Nor do we know someone whom we can imagine raping or burning a house. It’s a puzzle.

Unhappily, trials seldom give us any objective answers to these questions. What we do get is the evidence — much of it horrific and as beyond imagining as the crime itself — and a picture or pictures of the accused, all of it prejudicial pro OR con. The “perp’ we end up seeing, and judging, is a creation of our perceptions, our own values. This has consequences. The murderer, we are glad to consign to prison for life. the rapist, however, many of us want to torture. He who commits mayhem or assault, we would like to see assaulted or mayhem-ed. The arsonist, not so much; all that he draws is pity and wonder — arson seems a purposeless crime. But it too, like rape and mayhem, we puzzle to grasp. It’s a mystery. And we all love reading mystery stories. Over and over again. the same holds true for rape, arson,and mayhem trials. the accused remains a puzzle even after all has been testified to, shown in pictures, argued over, and decided.

It is so with Albert deSalvo. Though we know the whole public part of his story — and knew it over and over again for decades — we know none of the private story. Why did he do it ? how could he do it ? Probably not even he could have told us. Likely he did not know why. as for how could he ? He just did. Perhaps that was all there was to it. He did it because he could.