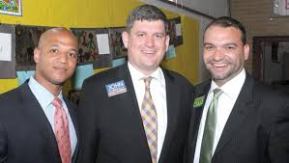 Here and Sphere is not going to make any endorsement before the Primary. The Globe speaks of the 12 candidates, by means of multiple wide-ranging Forums, having forged something like a common agenda. That is true; there is less commonality, however, in the major contenders’ bases of support. We feel that all Boston’s voters matter, and that, as many of the candidates have proven that they authoritatively articulate most if not all the major issues, we cannot pick two of them, but not a different two, and thus leave many bases of support on the sidelines.

In the “Final,” with only two contenders running, bases of support will not stand out so sharply. Each candidate will have to build a coalition of many bases of support. each, likely, will have to win votes as well from the other’s support base. Our endorsement will thus not unjustly raise up some political communities and downgrade others.

We also want to see more of how our potential endorsee manages his or her campaign. Mayor is a managerial job as well as one of policy vision. If a candidate can’t manage his or her campaign smoothly, what confidence do we have that he or she will manage the job of Mayor ? That said, many of the likely Finalists have managed their scheduling and outreach commendably — some better than that. Less of them have shown the degree of issue preparation we expect of an endorsee. A Mayor must be familiar enough with every City department, including Inspectional Services and the Public Health Commission (including its smoking ban section), to know what in each of them needs reforming — and what doesn’t; and how to explain his or her reforms convincingly to Boston’s interested voters, and to the department employees.

This matters a lot. The Boston Teachers Union has, by its endorsement of two candidates — Felix G. Arroyo and Rob Consalvo — both polling well out of the Final but who align closely with the Teachers’ own agenda, given the impression that it is unready to understand that dramatic reform of Boston’s public schools is going to happen. The newspaper endorsements proclaim it. The strong poll showing of John Connolly so far proves it. The Teachers’ Union risks, by its endorsement, being left out of the conversation that has been going on for months now — a conversation which it feels threatened by — and has said so.

Wiser it would have been, in our opinion, had the Union endorsed one favorite (Arroyo would have been our BTU choice) and one of the moderate school reformers, such as John Barros, Mike Ross, or Marty Walsh. Other endorsing Unions have done that. Union solidarity is commendable, and no workers work harder or contribute more importantly to society than teachers. But realism is also a necessary skill in the world of high politics and ;policy. Such realism will also be needed by the next Mayor if he or she is to not face serious conflict with the employees of any City department that he or she insists on reforming.

Our endorsement process begins now. Candidates should know that not only our editor, Mike Freedberg, our chief reporter on this campaign, will be involved in the decision. Our co-founder, Heather Cornell, will be equally involved. Cornell is Boston’s most gifted life-style writer and knows as much as anyone we have met about in-school issues, children’s health — both mental and physical, emotional and social education, drug abuse problems, health care and hospitals, and the gap between education and securing a decent job in the work force of tomorrow. Candidates should be prepared to answer her questions — and Freedberg’s — and, hopefully, may even add to their knowledge of the issues from conversing with us.

—- the editors / Here and Sphere