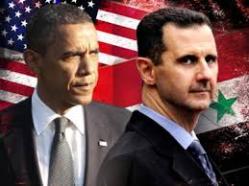 ^ to slap a bad guy or not to slap ? the President has made it clear.

Three weeks ago Here and Sphere addressed the issue of Syria — of what, if any, should our nation’s response be to Bashir Assad’s uses of chemical weapons upon his own population, civilians almost all. We supported a response aerial only.

Today we reaffirm that position. We know now even more certainly that Assad, who tortures his people in “torture centers” — 27 of them, according to news accounts — and wages war upon them, has used chemical weapons on civilians numerous timnes. There is no reason to posit that he won’t do so again, as often as he likes, if no one does anything to stop him.

Death by chemical weapons — sarin gas, mostly — is slow and horribly painful. Of course, for a man whose torturers day after day inflict hurt and mutilation upon people to the point that they beg for death, killing by sarin gas is just another day at the office. Assad is a brute whose crimes, if we can believe the New York Times accounts, approach, maybe even surpass, those of the late Saddam Hussein. If even half of what has been reported is true, he is a war criminal every bit as criminal as those of Nazi Germany; he needs to be captured and tried at The Hague International Court.

That said, the ouster of Bashir Assad is an issue for another day. In the civil war that now rages over Syria, the U.S. can play no clear role. Assad is at war with a bewildering varierty of rebel factions, some of which would rule at least as lethally as he does. This war might go on for years.

Our responsibility here is simply to defend international rules of war — yes, there are such; no war can be allowed to be total — primary among which is the protection of civilians who have to live, or try to live, lives inundated by combat going on all around them. The international community also defends combatants from the worst of war crimes. That’s why the Geneva Convention exists, a protocol signed by almost every nation, including ourselves; it’s the Geneva Convention that first established a category called “war crime.” At Nuremburg in 1946, we and the other nations victorious in World war II, held a tribunal to adjudge defendants guilt or innocence of war crimes. Nuremburg wasn’t perfect, but it established a precedent that even when people go to war, civilization oversees their combat.

Thus we, the U.S., have every right to respond to Assad’s use of chemical weapons. We should do so. The question is, how ? And when ?

When, we assert, is NOW. This morning Saudi Arabia and Qatar signed on to our doing so. So has Germany. France was already aboard. None of these nations may deliver retaliation themsleves, but that is okay; we can do that. What we need is the approbation of nations, and now we have it.

As for the “how,” we say this: find Assad’s chemical weapons dumps and strike them. Eliminate the weapons. Eliminate the factories in which they are made.

Israel has already done it — more than once. When Israel intelligence found chemical weapons being transported toward Hezbollah’s redoubts in the Lebanese mountains, its air force struck. We can do the same and more.

Of course the long debate has given Assad tons of time to move his chemo and cloak his chemo factories. But they can be found. The rebels can find them — will find them. Once found, they should be struck, quickly.

That is all that we should do. We should play no part in this horrific civil war except to defend the international community and its standards; nor has President Obama called for any such involvement. As he and Secretary Kerry rightfully insist, the ultimate fate of Assad will be decided by Syrians.