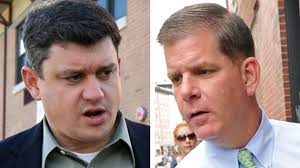 ^ The top two continue to be the top two.

Yesterday was a holiday, Labor Day.

Oh really ? Not for the serious candidates for Mayor, it wasn’t. They knocked on doors, stood out at supermakets meeting and greeting, held fund-raiders, made speeches. Still, it wasn’t as simple as that. There was method in their movements. they “worked their base.”

Marty Walsh, who has made every effort in this campaign to live up to his being a “son of labor,” gave a declaration-of-agenda speech at the Greater Boston Labor Council’s annual labor day breakfast.

Felix Arroyo, who has campaigned as tribune of the city’s needy, outlined his “pathways out of poverty” in a speech to public housing residents in South Boston.

Charlotte Golar-Richie firmed up her support among the City’s old-line Black leadership. 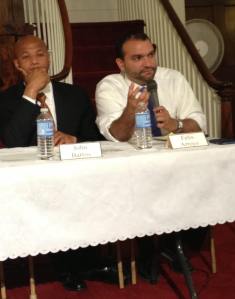 ^ Felix Arroyo : is his “base” big enough ? Will it turn out in big enough numbers ?

That these folks campaigned to their “base” is no mistake. With three weeks left until Primary Day, and at least sevEn potential winners running, the time for Mayor hopefuls to campaign all across Boston has ended. They’d be kidding themselves if not. By now, the voters who are going to actually vote on September 24th have gotten to know many of the serious candidates fairly well. they probably like several. But a candidate can’t settle for being liked along with others. It is time now to assure the votes of those who know the candidate best — to “bank” them (as we used to say; and to keep those votes away from all rivals. That means visiting the “base” a lot now — again and again.

Still, no candidate with a serious chance of making it to the November final can afford to forget voters not in his or her “base.” Second-choice votes may well make the difference between making it to November and not. Consider, too, that even the two finalists will likely not get more than 20% of the Primary vote. Which means that the ultimate winner in November will owe a majority of his November vote to people who did NOT vote for him or her in the Primary. A serious candidate must work to become many voters’ second choice even now, before they will actually vote for that candidate. Fascinating !

Working for second-choice votes requires a candidate to not get too narrow with his or her theme. Narrow themes, like Bill Walczak’s “no casino” mantra, may win some first-choice votes, but they don;t sow many second-choice seeds. (Example : Mel King in 1983. He voiced the far left’a agenda as stridently as today’s Tea voices the far right.. Far left purism got King to the final but guaranteed his November defeat.) Several of the candidates in this Primary have voiced narrow themes, though none so stridently as King in 1983.

We have talked of a candidate’s “base.” What of their count ? At this point, the candidates’ bases can be counted with some confidence :

Marty Walsh has the largest base : organized Labor — to the extent that its members live in the City ; many don’t — and much of Dorchester, a strong showing in South Boston, and no less than second in Charlestown.

John Connolly has the next largest base : school reform-minded parents — and West Roxbury-Roslindale, which by itself will likely total 10 % of the city’s primary vote.

All of the other candidates all have problems gathering a base big enough to measure up to Connolly or Walsh. There is, actually no way that Conley, Arroyo, Golar-Richie, Ross, or Consalvo can win the Primary on base votes only. Each draws significantly from the others — less so from Walsh and Connolly, because Walsh and Connolly are now perceived by many voters as likely to win the Primary; and voters who like one or both of Walsh and Connolly, as well as some of the other contenders, would defy voting behavior were they to vote for someone they perceive as not likely to win.

Of all the candidates trying to catch Connolly or Walsh, the one who has the strongest chance is Golar-Richie. As the only woman in the race, she has unique appeal to Boston voters, most of whom are female. Arroyo must win to nhis side many voters who do not often vote in City Primaries. Consalvo needs to find a campaign rationale. Dan Conley suffers from simply being too much like Connolly or Walsh in outlook and image. As for Mike Ross, he doesn’t have a message that resonates much beyond Downtown life.

^ Charlotte Golar-Richie : do not count her out. And if she makes it to November…..

For Walsh and Connolly, the task now is to speak broad themes, inclusive themes, and look as well as talk as Boston’s visionary and also ambassador to the entire economic world. They must talk big in magnet words and make voters look to a brighter day.

The chasers need to attack the leaders, question their themes, dispute their ability to do what they say they will do — and to show how they, the chasers, can do the big stuff better.

Soon we will see if they can do that.