In the November 2009 election, Ayanna Pressley became the first woman of color ever elected to the Boston City Council. She was re-elected in 2011, finishing first in 13 wards and in the City as a whole. Her rise from unknown to the top has surprised many; but in the internet age, when candidates can become very known very quickly, and where a fresh face and articulate person can become liked almost as quickly, her rise seems less unique. There will surely be more Ayanna Pressley stories than not in Boston elections to come.

She grew up in Chicago and came here to attend Boston university. Until recently, growing up 1000 miles from Boston, and not being at least the child, or grandchild, of Boston residents, was an all but impossible start for any success at all in Boston elections. But the internet age has modified that; today one can grow up anywhere and have Boston voters feel close friendship to you. Pressley’s success proves it.

Granted that she did have some political experience here in Massachusetts, first as an aide to Congressman Joseph Kennedy II and then in the office of then Senator John Kerry.

We first heard her speak in person at a “community conversation,’ as a candidate house party is now called, at a house named “Ashmonticello” on Dorchester’s Adams Street hard by the Neponset River about a block from Lower Mills. There she answered questions from about 5 people, many of them schools or progressive-issue activists. She stood in front of the gathered, dressed in professional businesswoman style and, in a sweet soprano voice — her meet and greet voice too — gave detailed, evenly delivered responses. 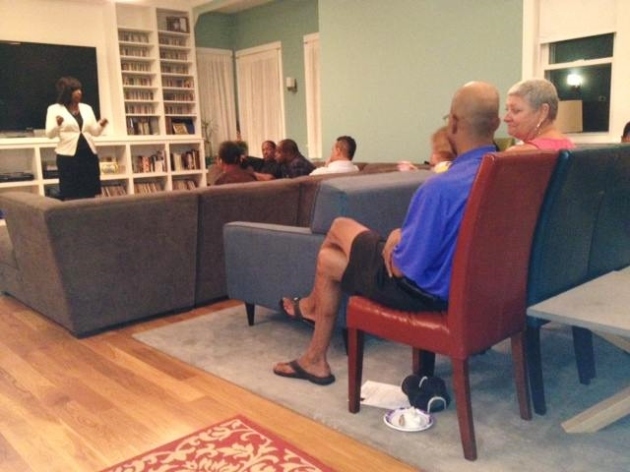 Most of the questions addressed the proposal that has become her hallmark : a Home Rule Petition, to the legislature, to grant Boston control over its own liquor licenses.

Some background : under Massachusetts law, all Cities are state-chartered entities; and as such, they must petition the State if they desire to make changes in the state statutes governing their charter. Boston is thye only city whose liquor licenses require State approval. This was done over 100 years ago, when State and City were grievously at odds politically and ethically.

Every City Council candidate in this year’s election hashad to state a position on Pressley’s Home Rule petition, the most significant home Rule reform presented seriously in many years. It also provides a specific example of the neighborhood-centered planning thaty she, like so many candidates running in this election, including the mayor candidates, call for as an overdue BRA reform.

Pressley has conducted as city-wide and active a street-level campaign as any Council candidate. We have seen her in Meeting house Hill, on Dochester Avenue, in Jamaica Plain, Roxbury, and downtown. She has endorsement of palnned parenthood and of several Democratic party Ward Committees. After the Primary we will focus in greater length on the focus and outreach of her seeking a third Council term.