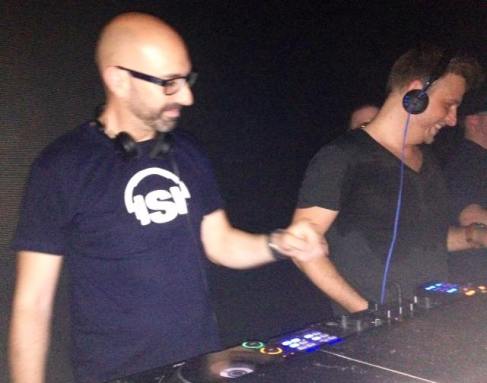 At Bijou on Friday night the Madrid-based DJ team of Chus and Ceballos dropped a masterly, three and a half hour set on a dance floor as crowded as always happens when this duo comes to town. They did not disappoint. Their set moved straight ahead, a long train ride as metaphor for the long ride that is life itself. We grow up from the simplicities of childhood to the ever more quizzical disputations and demands that pressure us as we come of age. At Bijou, Chus and Ceballos worked just that sort of narrative and message.

The music advanced from basic blues, bottom rhythms to overlay blends, then to overlays with streaks added and conversations; then to rhythms themselves more streaky and complicated, alongside top-octave sound effects intensely varied. The duo’s mixes, too, progressed from simple to not at all simple. DJ Chus, as inspired a shape-maker as any, bent and twisted the music, stuttered it, fade-knobbed it, and bounced it from one mode to another with intensifying aggressiveness.

His mixes touched skin and bit deep. From one-two-three on the fingers, the rhythm and scream of Chus’s work inexorably pulled the dancers beyond control into its vortices of ambition, doubt, wants, needs, dreams, and siren calls variously lovely or fatal. It was a sweet sound at first, then sparkly, cool as a crush.

As always, they worked two mix boards and two PCs; and, as always, it was Ceballos who cued up tempos and tracks — and mixed the basics — and Chus who crafted the complication. Ceballos mixed his stuff using headphones, Chus shape-shifted almost always without them.

Because Chus and Ceballos have been doing their work for a long time;  because as house music has grown up, so they too have grown, with and by way of the music. And thus their life narrative was theirs as well as one for the Bijou fans. To make the point quite clear, they tooled into their set a great many tracks from their personal journey, including Todd Terry’s “Can You Feel It,” 1972’s disco classic “Soul Makossa,” and a drastic re-work of The Fog’s 1994 “Fired Up.” Also in their flashback mix were the venerable house track “Preacher,” samplings of Danny Tenaglia’s “Elements,” the monologue from Victor Calderone’s “Let Me Set You Free,” Queen’s scream from 1980’s “Another One Bites the Dust,” and — a staple of Chus and Ceballos sets — portions of two Celeda sides, “Music Is the Answer” and “The Underground.”

In addition, they slid all sorts of throwback voices into their mix, plus some segments of 1978-ish reggae toasting. And of course their basic choogle recalls that of Creedence Clearwater doing the Bayou slop. Their past is, as one expects, 40 years, at least, extensive and wide-ranging. They used all of it at Bijou.

None of these memory sweeps dominated their rhythmic progress. Their own more recent tracks, including the dreamy “Partenza” and the samba-fierce “Quimera.” (co-produced with Marcello Castelli), assured as much.

Rhythm dominated, persuaded, tossed the dancers . Choogle became  rumble, strut, sizzle and stutter. Upper register screams jazzed the beat; screeches lit it up. And then — in the final forty minutes or so, Chus and Pablo blew samba beats past talk which lifted the samba onto a babble of many percussions running across each other’s path.

This sounds like a heap of blues, and for Pablo and Chus, the blues it was. But it also sounds like an exciting adventure; Chus and Pablo’s long set was an exciting sonic adventure for sure. One that the Bijou crowd could not get enough of or adequately respond to except by yelling and dancing and raising their hands in stunned astonishing.