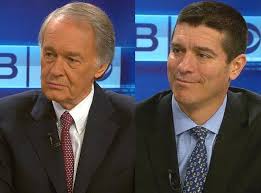 In twelve (12) days Massachusetts voters will elect anerw Senator to go to Washington in place of John Kerry, who resigned to become Secretary of State.

Twelve days, and we at Here and Sphere are having a peck of trouble trying to decide who to support. For the Republicans there is Gabriel Gomez, who has never held any elective office, seems unfamiliar with the issues, and appears reluctant to advance any issues that matter to anyone who’s not a politics junkie. For the Democrats, there is Ed Markey, 37 years a Congresssman, who knows the issues cold and says only too clrearly how he will vote: as a Massachusetts Democrat. And this we of course like.

But Markey could vote his views just as well in his Congress seat. Indeed, it puzzles us why Markey is, at this late stage in his career, surrendering 37 years of seniority — clout which benefits Massachusetts — to become a very junior Senator. By not electing him to the Senate, our state retains the advantages of Markey’s seniority.

That alone gives us reason to advance the candidacy of Gabriel Gomez. But we hesitate, because to the extent that we know anythying at all about what kind of Senator he might be, we don’t like it. For example :

He has a “plan to reboot Congress,” but his procedural reforms do not mention the only one that really matters: curbing the filibuster.

On abortion, he says he has no litmus test for Supreme Coiurt nominees, but he wants to write into law a 24-hour “waitng period” for wpomen seeking abortion procedure. Siuch a waiting period may be advisable as a matter of medical. ethiocs, but writing it into law intrudes lawyers and courts upon decisions that only a woman and her doctor(s) have competence to decide.

On gun control, he opposes a federal assault weapon ban — a ban that our previous Republican Senator, Scott Brown, supported.

He is for repealing Obamacare, which has given as many as 50,000,000 uninsured people — mostly of very limited income — health insurance. Whatever its other merits or drawbacks may be, universal health insurance enables people to get well and thus not cost our economy the impediment of workers taking sick days or even extended health absences. Not to mention the loss of income to such workers, almost all of whom cannot afford to forego even one week’s pay.

On taxation and the budget, Gomez thinks it OK to discuss eliminating all kinds of current income tax deductions, including the mortgage interest deduction, upon which most homewoners depend when budgeting their monthly mortgage payment.

Gomez’s stated positions — albeit in most cases worded vaguely and often walked back — would be sufficient grounds for rejecting his candidacy and endorsing Markey’s. Except that it’s not at all clear that Gomez would follow through on any of his stated positions were he to be elected. His vagueness and waffling force us to view him as either a very shifty advocate, or to wonder if he simply doesn’t know what he is talking about. Or is he asking, “Trust me to do the right thing, and I will do it” ? Voters rightly feel manipulated by this Hobson’s choice.

Still, Gomez is, as many Massachusetts voters are saying, “a new voice.’ Two debates have broken his newness in, sometimes to the good. He is spurning the national GOP’s right wing and its loony views; he would surely be a vote for comprehensive immigration reform; and there remains one more debate with Markey, at which Gomez can ramp up his issues advocacy, maybe.

Given our feeling that Markey can do more for Massachusetts by retaining his seniority as a Congressman, we’ll give Gomez this one last chancve to tell, us why he is ready to be a Massachusetts Senator and not just an amateurish twist in the wind of favor versus unfavor.

—- Michael Freedberg for Here and Sphere