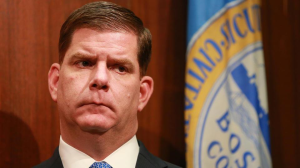 ^ ambushed by teacher union enemies : Mayor Walsh responded to a rather absurd — but believed — charge that he is planning to close 36 schools in Boston and hand them over to charter schools

A recent non-event in Boston City budgeting has created a two hour hurricane of controversy. How this came to be is itself a story, and I will get to that; but first, the non-story :

Mayor Walsh announced, about six weeks ago, that he was committing $ 1 billion to constructing new school facilities in the City. The funds would come from the City’s Capital Budget and be allocated over a ten-year period. The plan calls for the closing of a substantial number of very old school buildings as well as the construction of new ones, and the reasoning in the plan is simple : the cost of construction, and of maintaining the new schools, is far, far less than that of renovating the City’s very old, energy inefficient, poorly equipped school antiquities. Getting the $ 1 billion capital plan built would free up many, many millions of school expense for more important school-budget items : bus transportation, better school lunches, classroom equipment and supplies — the lack of all of which has rightly aroused much outcry from school parents.

I say that this $ 1 billion plan is a non event because that’s what it is. Every feature of the Mayor’s plan did he cite, over and over again, at many Forums during his 2013 Mayor campaign.

Another feature of Mayor Walsh’s school plan aroused controversy : the involvement of the Gates Foundation in purposing the new schools. This too, is not news. Walsh advocated in Forum after Forum during 2013 his intention to involve corporate partners in the operation and oversight of Boston’s schools. In that campaign he did not name the business entities he would seek to involve. Perhaps that is why his talk went unheard by  those who now find it controversial; because in the world of school politics the Gates Foundation has become the demon of some, the hero of others.

You may be asking why this is so. Answering that puzzle begins with your reading the Gates Foundation’s education initiative. The link is here :  http://www.gatesfoundation.org/What-We-Do/US-Program/College-Ready-Education

In the Gates Plan is a host of policies that certain interests bitterly oppose. These object to (1) having a corporation or private foundation setting policy for tax[payer-funded schools (2) evaluation of teachers according to performance (3) advocacy of the Common Core curriculum standard established 20-odd years ago by the nation’s then 50 state Governors (4) innovation, including digital and online instruction (5) partnering with colleges and universities.

In Boston, the teacher’s union and its allied parents not only object to having a private foundation setting school policy — that has been its stance ever since the Gates plan was first published — but also see the parallel move to increase the number of charter schools, presented by Governor Baker as new legislation, as the ultimate objective of Gates plan supporters — including Mayor Walsh. So what did the teacher and parent ally groups do ? They conflated the two initiatives. The cry grew that the Mayor’s new school construction plan was a ploy to turn Boston public schools into charter schools. An article published in Esquire explicitly claimed so, begetting the outcry that fevered social media.

The burn took heat from another Boston schools move recently begun : “unified school enrollment.” Hitherto, parents seeking to get their children into a Boston charter school entered a lottery, separate from the school choice process for standard public schools. Now the City’s school department seeks to have the charter lottery incorporated into the school choice selection process. This move was dubbed a means for implanting new charter schools.

Yet the claim itself was easy to blow up.

First: Governor Baker’s legislation calls for allowing up to 12 new charter schools every year allotted exclusively to school districts designated as :”under performing.” If a school district is not so classified (by the State Commissioner of Education), it gets no additional; charter schools.

Third : allowing up to 12 new charter schools does not mean they would all receive state certification.

Fourth : Baker’s bill does not mean 12 new charter schools every year forever. How could it, when it allows new charters only in districts designated as under performing Keep in mind that Massachusetts school districts as a whole rate very high compared to those in other states.

Fifth : Mayor Walsh actually opposes Baker’s charter expansion bill. At a recent hearing, Walsh testified that though he favors charter cap lift, he does not do so at this time; he also demanded that the State provide the City an additional $ 55 million in school budget aid. The Mayor’s opposition puts a serious obstacle in the way of passage of Baker’s legislation.

All of the above make clear that the caper, by teacher union activists and allies to create a narrative demonstrably false was justly and property blown away by the following statement of categorical denial by Mayor Walsh within two hours of the claim going viral on social media :

“The Mayor has never said, nor does he have a plan to close 36 schools. Mayor Walsh has proven his dedication to Boston Public Schools by, in the past year alone, providing unprecedented budgetary support, extending learning time for students, adding 200 pre-kindergarten seats to the district, and hiring a first-class Superintendent. The Mayor also launched a multi-year Educational and Facilities Master Plan this fall to guide smart investments in Boston’s schools with the goal of providing all students with a high-quality, 21st-century education.

Here now is the Mayor’s 10 year capital plan in full as presented on City of Boston website :