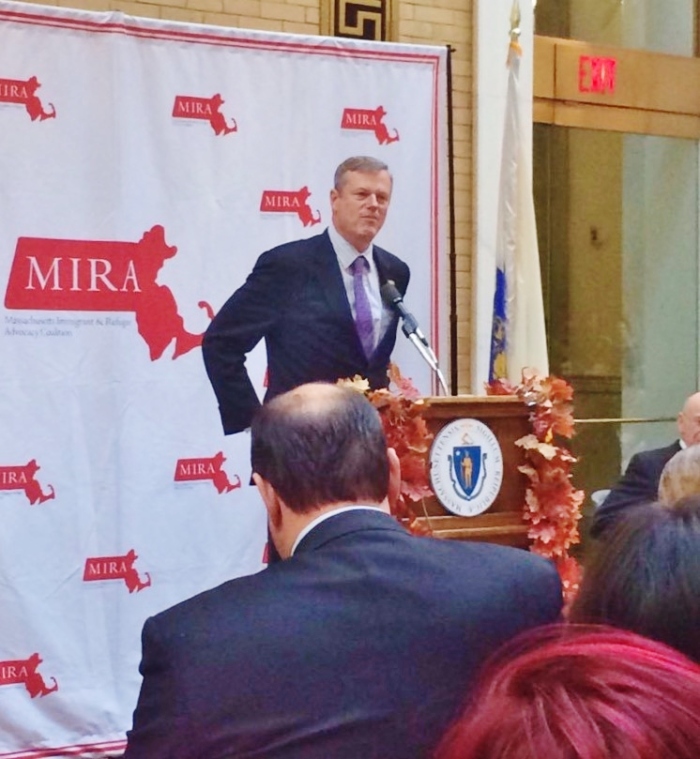 Yesterday when asked whether Massachusetts would welcome Syrian refugees, as we said we would, let us imagine that Governor Baker said this :

“I intend to work closely with the President so that he can both uphold America’s traditional role as a place of asylum, but also ensure that anyone seking refuge in America is fully vetted in a sophisticated and utterly reliable way.”

What he actually said, as quoted by several news sources, was this :

The two statements — the first was made by Governor brown of California — could practically be twins — except for one huge omission on Baker’s part. Why did Baker not begin his statement with the “I intemd” clause that Governor Brown was careul to say first, before he spoke the tough stuff ?

Words matter. Baker’s omission allowed his potential opponents — all those who in Massachusetts have been tackled politically and left in the dust by the corner office’s Tom Brady as he has scored one legislative touchdown after another — to get up again, coalesce, and throw him or a big loss on a sore point huge for many residents of our state.

Baker has done this before : say stuff without thinking. Worse, he is the most liklely to misspeak, the more hot-button the issue. Remember his first reaction to the Hobby Lobby Supreme Court decision ? That it didn’t matter because in Massachusetts we have universal health care ? True, we do have it : but that was hardly the threat posed by Hobby Lobby. Baker quickly corrected his mistake and reaffirmed a full commitment to women’s reproductive health care.

Baker will have to revise his Syrian refugee statement quickly. Likely, he will. He must know that what he said does not accurately reflect his true opinion. After all, only an hour before he spoke, he attended the MIRA Coalition’s Thanksgiving luncheon and addressed the gathering (see photo at top of article) ! MIRA is Massachusetts’s most infliuential immigrant advocacy group; surely Baker did not put himself on its luncheon podium out of hostility.

MIRA has asked Baker to revise his remarks. So have I. Words amtter, as do the sentiments and policies that they carry on their backs across the opposition’s goal line.

We are a nation built by immigrants (including those brought here in chains) and ennobled by refugees who value what we are about enough to risk all. Every immigrant community draws strenth from every other; it’s why in America immigrant communities blend rather than precipitate. Baker’s misspeak did not sadden only Syrians.

Baker is better than his misspeaks. I think we all know this. I think even his opponents, thrilled to see him sacked for this loss, know that he is Tom Brady when he focuses. I look forward to his net three touchdowns.

Now to the question itself : should Massachusetts welcome Syrian refugees ? Of course we should. There is already a large and well established Syrian community in place, in West Roxbury, that began arriving here during World war I. It now numbers well over 5000. A West Roxbury Syrian, Sharon Abdelahad, was elected a Ward 20 state representative back in the late 1980s. The famous fashion designer Joseph Abboud calls Boston’s Syrian community home. I could list many, many more promient West Roxbury Syrians (and Lebanese). Most are Christian — of four separate rites — but some, more recently arrived, are Muslim, like Mike Haidar, who broadcasts a Syrian lagiuage radio hour.

The community is prepared, as it has been since the horrific civil war began in 2011. The head priest at St. George’s Orthodox Church, on Emmonsdale Road, the City’s largest Syrian parish, told me, “Michael, we are ready to do our part.”