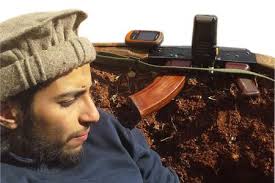 ^ Abdelhamid Abaaoud, Belgian death lord : the body will be killed, but the evil lives on

The attacks in Paris continue to command our attention, as they should. They were intended to get our attention. On that point, we share common ground. You the killers have our full attention.

We have to get right that the challenge upon us is not going ever to be eliminated, like a vaccine eliminates a bacterium.Ideas cannot be killed. As long as there are human beings, ideas will live no matter how evil. Anti-Semitism has existed for 1700 years or so, Naziism for about 95; racism has a long history in America and seems unlikely to disappear any time soon. Leninist politics are alive and well on the internet and on college campuses; Leninism may rise and fall, but it will likely never go extinct.

Thus we see that the ideas that make up Islamism —  glorification of mass murder and self-murder via distortion of the Quran — cannot be made to vanish. Even if everyone who professes it today were to die, the idea would remain, re-discoverable by anyone anytime so inclined. It is a will o’ the wisp to assert that our goal right now is to “defeat the idea.”

To defend our civilisation we will need to act differently. War it is, and war means violent defense. The most committed Islamists today call Daesh home, and the means of obliterating that home are at hand : French and American war,planes; Kurdish and Iranian-trained Iraqi fighters; Russian aircraft and marines; airbases in Jordan, Turkey, and the UAE. Everywhere in its home turf, Daesh is being defeated; Syrian Kurds are pushing Daesh out of the Al Hawl oilfields, its last; airplanes are attacking Daesh oil trucks. Drone strikes continue, taking out Daesh leaders one by one every other day. Raqqa will soon be crushed, and Ramadi retaken, only Mosul will remain.

Taking Mosul will not be easy, but the co-operations necessary to the task were discussed seriously this weekend at the G 20 meeting.

Military and diplomacy are weapons that work. They cannot kill the Islamist idea, but they can make it infinitely harder for bearers of the idea to work its evil.

France failed enormously this time despite the lessons of Charlie Hebdo. Why did French intelligence fail ? Probably because the attacks of November 13 were planned and launched from Belgium, where police inefficiency rules. We like to think that the unified European Union, with no internal border controls, is one nation, It is not. National jurisdictions crease the weave; the Paris attackers used them. How easy it was to drive from Molenbeeck in Brussels down to Paris to wreak death, unfollowed by even those who were following !

It will be less easy now. French security services are taking the battle to the homes and hangouts of those who before they merely followed. Belgium, horribly embarrassed by being outed as Europe’s nest of Islamist death, is doing the same. Ultimately this era’s inspirers and facilitators of killers housed in Belgium (and in France too) will be droned away.

Yet future possibility of attack will not go away. There will some day be more planning, more recruiting of killers, more would-be bombmakers itching to sew new suicide vests, more Islamist — or maybe other — dreams of darkness. This will NOT go away. Evil does not die. It lives. All manner of it lives. This we must understand.