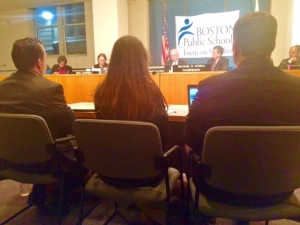 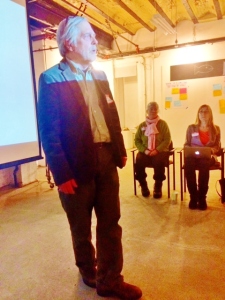 ^ Boston School District CFO testifying at Febr 4th Budget hearing (L) (R) John Lerner speaks at yesterday’s BPS Parents’ budget session —- —- —- —- —- Last night a coalition of two Boston Public Schools parents’ groups presented its case that the upcoming year’s Boston Public School budget poses a threat that cannot be allowed to stand. They are right. The FY 2016 budget — so far only a proposal — does pose a threat. It includes school closings, program “consolidations,” transportation changes that the parents will not like, and more.

Unfortunately the Parents’ presentation also made clear that Boston’s Public School budget makes no sense. As demonstrated by parent Heshan Weeramuni, who knows the school budget as well as anyone, Boston’s method for funding public schools works the opposite of how it should. Namely : funds are allocated to one school or another according to how many pupils atttend : the funds follow the student. The fewer students enrolled in a school, the less funds allotted to that school.

This sounds simple. It isn’t. If, for example, Bostons’ 128 schools enroll 5,700 less students than the 57,000 it allocates money for, the school budget does not decline by 10 percent. It doesn’t decline at all. The proposal for FY 2016 calls for a budget of about $ 1.043 billion. That’s the amount irrespective of how many students attend.

But if ten percent less students attend, and thus — because funds follow the student — ten percent fewer dollars allocate to the 128 schools, where does that $ 104.3 million go ? It doesn’t disappear. One might think that it goes to pay the salaries of teachers, custodians, and school aides, because even if a school sees ten percent less students, its staff still needs be paid. But in fact that’s not the case. According to Weeramuni, if a school’s enrollment drops, staff just loses positions.

At the Parents’ meeting Weeramuni posted a graphic showing that a school faces staff cuts if it falls short of projected enrollments. One puzzles about this. If staff is laid off, where does the money go ?

^ Parents at the session posted questions about the key topic ; why don’t City and state spend more on public education

This process has huge consequences for charter schools. The State’s charter school law establishes a compensation formula whereby school districts receive in-lieu-of money for each student who chooses a charter rather than a public school. It does this by the statute designated as Chapter 70 of the state’s General Laws. The parents at yesterday’s meeting noted that the State’s Chapter 70 money falls $ 57 million short of what the formula says it should be. As Boston applies its funds by the funds follow the student method, they are right. But as I’ve shown, that method begs the question. Where does the money go, that isn’t allocated because the number of anticipated students falls short ?

Parents asked many questions about why don’t City and State spend more on public education ? (see photo above) As I see it, the question isn’t “why don’t they spend more ?” but “why do they spend so wastefully and illogically ?” For example : if a district sends ten percent of its of-age students to charter schools, it should cost significantly less to educate the smaller number. Yet Boston’s proposed FY 2016 budget isn’t going down, it’s going up, by three to four percent.

Last year the Boston school budget also went up. 97 percent of that increase paid teacher salaries. Teacher, principal, administrative and custodian salaries and benefits are expected to take up 78 % of the FY 2016 budget — some $ 782 million dollars. Add to that the $ 5 million in extended time money earned by teachers at the twenty Boston schools at which the school day will be lengthened by 40 minutes.

Boston’s schools need badly to reconfigure; to set up a digital academy; to open vocational technology schools; to innovate under the leadership of principals, who need to have full autonomy to hire staff. Yet the FY 2016 budget accords a mere $ 500,000 to its Digital Acaemy project, and autonomy for school principals is working its way slowly through the union contract process. Meanwhile, central administration IS cutting back — 134 positions were eliminaed last year; the new budget suggests more layoffs — and bus transportation of students is giving way to using the T. Parents do not like this, nor should they. But transportation now claims ten percent of the school budget : $ 104 million, and this despite fuel costs 45 percent lower than last year. (Note : no item in the FY 2016 budget shows this fuel cost decrease. Boston contracts out its busing, on a two-year contract basis. It needs to renegotiate that contract, and do it now.)

To sum up : Boston’s public school budget makes no sense at all. The new year’s proposal suggests there will be “a limited number of” school closures and “program consolidations.” Why ? Because of a $ 57 million chapter 70 shortfall that exists only because the school district uses a budget formula — funds follow the student — guaranteed to work backwards ?Meanwhile, parents of children in schools losing funds — parents of color in particular — cry out for more charters, not fewer.

Backward school movement needs to stop, and it will stop. The next generation cannot afford to be educated by mass production in which one system oversees all kinds of innovations, school sizes, school locations, school types. Students are going to be learning online in ever larger numbers, and pedagogy will become much, much more a situation of small, even tiny, classes. Who will do the teaching ? Why can’t it be students themselves, in advanced programs, or college post-graduates ? If we know anything about the new workplace, it’s that the younger the worker, the more cutting edge his or her knowledge. Teachers of the future — the very near future — need to be young, as newly graduated as feasible, the younger the better. What will the new school diversity cost ? (Probably a lot less than today’s schools, but that’s only a guess.)

How will these methods be paid for, and how administered ? Nobody in a position of public authority is yet talking about any of this.