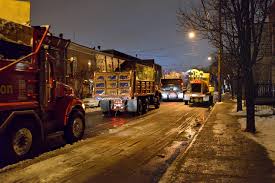 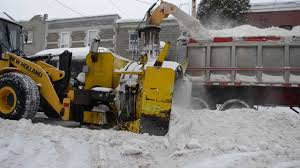 Ever since we launched Here and Sphere, my partner Heather Cornell and I , when discussing how a modern city operates, have featured the “Montreal method.” Today the Boston Globe, in its “Snowstorms don’t need to stop Boston cold,” has done the same. You can read the Globe’s op-ed here : http://www.bostonglobe.com/opinion/editorials/2015/02/13/snowstormms-don-need-stop-boston-cold/GED9LplvaQv41lO4UCCneP/story.html

We commend Editor Brian McGrory for focusing on Montreal. Mayor Walsh, in his 2013 campaign, often talked about what Montreal does right, that Boston does not. We agree. Montreal dodesn’t just plow snow, it removes it. Streets and sidewalks both. The City’s contract with its snow removal force specifies that streets and sidewalks must be clean of snow within 24 hours after the snow stops. I have visited Montreal often — yes, in winter too — and have seen it happen. Montreal doesn’t fool around.

They do it for the sake of commerce especially. The city was founded on commerce — as the entrepot for fur trappers and traders — and trade and commerce have been its central purpose ever since. The entire city is one big outdoor market of trade, finance, conversation and deal-making, money changing hands, often to the sound of music from the numerous musical festivals the City hosts all year long. The streets of Montreal are full of people; so are the “Squares” (pronounced “skwarz”), in which the festivals sound off for hundreds, thousands of Montrealais and Montrealaises. 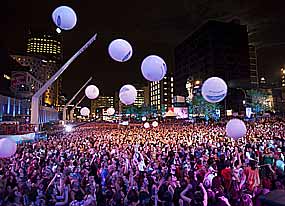 ^ thousands gather for Montreal’s “franco-folies”: pop music festival, one of dozens of downtown Montreal arts festivals held all year round

Yes, the City speaks French; that is both its charm and its force. It takes willpower to live in French, as Montreal does, surrounded by “les anglais.” Insistence and enjoyment. Montreal is built on joy and runs on joy. The bars and discos, boites and bistros close very late, some not at all. Night long, on “La Main” (Blvd. St-Laurent, the city’s north-south version of New York’s Broadway) and Rue St-Denis and in the adjacent streets, the party goes on; the conversation, the music, the eating, the commerce of thoughts, opinions ,and, yes, money. In French very much accented and worded far, far from the Parisian French you may have learned in high school.

Boston has evolved during the past 15 years or so in the direction of what Montreal is and has been. Today’s Boston, with its cluster of bistros, discos, shops, and people in the streets, could well pass for Montreal by day or night. At lip and wallet level, we’re there. But we are most definitely NOT there at the foundations. As the Globe op-ed points out, Boston’s snow removal budget is $ 18.5 million; Montreal’s is $ 150 million.

Montreal amasses its huge snow-fighting budget by means of a city sales tax. Its six percent, added to Quebec province’s seven percent sales tax makes Montreal goods expensive to buy. For decades, people have wondered how Montrealers manage it or tolerate it; but they have, and still do, and we can see why : weather doesn’t cripple the city, and in any case, the many millions who visit Montreal’s parade of arts festivals spend huge amounts of money — and huge amounts of the city’s sales tax.

Let’s remember, too, that Montrealers have universal, single payer health care; that the city is much, much safer than most US cities, because hardly anyone has — or wants — guns; and that the city enjoys one of the world’s most effective public transit and highway systems.

Diversity ? Boston has become much, much more multicultural these past 15 years or so than it used to be, but even now we’re only beginning to approach Montreal’s melting pot of Italians, Brazilians, North Africans, Orthodox Jews, American Blacks, Hispanics, Viet Namese, Polish, Chinese, and Syrians. This despite Quebec province’s insistence — vigorously enforced — that only French is entitled to legal protection. (Quebec gives immigration preference to French speakers.)

Of course I am not requesting that Boston parrot Montreal. But i am asking that our city adopt  Montreal’s dedication to enabling, promoting, supporting (including with city taxes if needed) commerce in all of its variety. It begins with a complete re-modernization of our MBTA system, yes; but not as a thing in itself, because the City can’t be made whole if only one of its limbs is good to go. A city needs its entire body to be hale and ready.