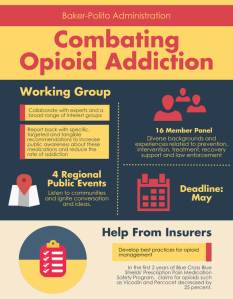 Yesterday, as anticipated, Governor Baker announced his panel of advisers on the State’s opioid epidemic, a scourge that caused an estimated 978 deaths in the state4 last year. The panel is to gather input from, presumably, the addiction and recovery community, and to report back to him in May on what to do about it.

Like many, I had anticipated that the panel would include several members of the recovery community itself — people who are actually in recovery — because Baker has made it a priority to confront opioid addiction and support people in recovery all the way to full health. He said so in the campaign, and he made it a point to bring some prominent recovery people into his personal advice circle.

Because Baker did all that, and was seen by many to be doing it, quite a few people — including myself — seemed pretty sure that he would use the direct experience of those in recovery to frame a patient-oriented action program. We were wrong.

Baker has done the opposite. Rather than a panel heavy with those who need recovery serice, he has appointed a 16-member panel of people who provide services. as Baker tweeted yesterday, “people from prevention, intervention, treatment, recovery support and law enforcement form our 16-member Working Group.”

How, then, will people in recovery participate ? Doubtless he will continue to talk — as he has done fruitfully for months — with those in recovery whose personal experiences have resonated; but most of the recovery input will likely arise from recoverers testifying at the four regional panel Forums that Baker has planned.

The panel will take testimony and will almost certainly make recommendations as follows : one, what services can we best provide; two, how can we provide tjem in the most cost-effective manner ?

This is how Baker sees almost every major state service : best practice execution without wasting money. At a meet and greet in Charlestown just before the election, Baker was asked a health care question, and these priorities were the crux of his very specific response. Deliver the right services to the right people, and you’ll do right by the people; and you will save money.

It sounds cold, but it isn’t. Not weighing his Opioid panel heavily with people in recovery, he excludes the personal from a matter which to him is best seen as purely functional. Get it done, get it right, do it within budget.

“Get it done, get it right, do it within budget” is why we elected Baker in the first place. He knows it.

I do hope that once the Panel has delivered its report, Baker will ask his friends in the recovery community — a few of them quite prominent people in their own right — to execute the plan, or at least to serve on a board monitoring it. After all, the entire priority is them, right ?

Meanwhile, we await the panel’s public forums and its May report.

^ no trains today ; the Mattapan “high speed” line looks as bleak as its riders wax furious

If every day in a year — or two years, or a decade — were as snowy as this month of days, the MBTA would have every reform it needs, every repair, every tax dollar. Every train would be a new train and equipped with wi-fi. Every bus and train would arrive on time. If.

Right now, reform of the MBTA is everybody’s urgent issue. Governor is working on it; heck, even the legislature is crafting reforms. Something may actually get done. But what ?

The most likely reforms — and yes, there will be some — won’t cost much money. Both the Governor and the House Speaker have assured us that the State’s 2016 Budget will not include new taxes or user fees. What we’ll probably get is rearrangement of T management. Instead of a governing board of seven, appointed to staggered terms, we’ll likely get an operations group answerable to the Governor all at once. (And a new General manager, of course.)

In addition, the T’s current operator, Keolis, a European firm, may find itself terminated and replaced by a more local firm. There’ll be changes to the T’s pension fund, currently short by a large number.

Many legislators are talking about “reallocating resources” — meaning that money saved by reforms in this or that State agency will be re-purposed to the T, to repair broken switches, replace DC-powered mototrs with AC, install heaters along outdoor tracks, and such like. Ambitious expansions of T lines will be put on hold, the money used instead to order new buses and trains to replace equipment older — as some have noted — than the 1978 Blizzard.

All of the above need be done as soon as possible. Yet every item seems quick-fix. None will bring the T firmly into the 21st Century or assure weather-proof performance. To do that, the t will need major new money that can only come from increased fares and higher, dedicated taxes.

I’m talking T expansion. I’m talking cars and buses equipped with wi-fi and with air conditioning, or heat, that works. I’m talking stations weather proofed or the comfort of those who wait therein. I’m talking all night service. And I’m talking a T that doesn’t have to use almost half its income to pay interest on $ 9 billion of debt.

It is all too easy to blame the T’s debt burden on the Big Dig’s costs. This is the reddest of red herrings. the Big Dig helped make downtown Boston the beehive of commerce it is now. the Big Dig paid thousands of building trades workers a great living for more than a decade — money that they then spent liberally into the local economy. that building the Big Dig pushed debt burdens onto the T need not have gone unresolved, as it has, by several legislative sessions and two governors.

Democrats of the knee-jerk kind, and the non-union Left, are finding it fun right now to put “Charlie on the MTA” and watch him never come back. This is as useless a conversation as it is silly. Governor Baker knows very well — knew it before the snow — that rebuilding the T will be a feature of his term and a standard for his re-electiom campaign. Baker also knows that T rebuild can NOT get done unless the Speaker of the House is committed to doing it. Baker has made it a central feature of his governance to work in partnership with the Speaker — as two previous governors often did not, to their disadvantage. That’s a plus.

What the public ought to do is to keep the conversation going well into the summer and beyond so that T reform never stops being a “squeaky wheel getting grease.’ (Pun intended.) We cannot afford to lose this opportunity by orgetting, in summer days, what ailed us in this winter.