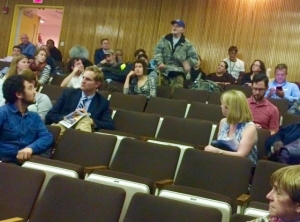 Hundreds of concerned residents of Boston, many of them homeless, crowded into a fourth story auditorium last night at the Blackstone Community Center, in Boston’s South End, to decry the crisis that the October closure of Long island Bridge has occasioned.

Condemnation of the bridge — a structure well beyond safe usage — let several hundred shelter seekers without the Island hospital as a place of refuge. Equally as many people, recovering addicts and alcoholics, depended on the hospital for treatment and care; they too found themselves cast adrift by the bridge closure, which happened with — so it seems — without any notice at all to those affected.

A month later, and still homeless or without the care they need, the hundreds who remain shut out testified 0ne by one : pleaded, demanded, ranted at City officials and at the four City Council members who put themselves on the firing line — Frank Baker, Ayanna Pressley, Charles Yancey, and Michelle Wu. Some who testified did so politely, but none spoke without intense emotion.

Several advocates for the homeless spoke, and several people who operate shelters — none more purposeful than long-time housing activist Michael Kane, who, a while ago, was a City Council candidate himself and who demonstrated detailed knowledge of the City’s housing issues : the new Mayor’s affordable housing plan, which Kane argued is inadequate; funding issues for placing homeless people in homes; and suggestions how to add new funds — Kane called for the City to create 500 housing vouchers for the 500 evicted from Long Island.

Kane, like most of the speakers, addressed question s directly to the our Councillors; but few answers were given, even by Pressley, probably because not even she had any answers to give. Nor did the City’s representatives, who included former Mayor candidate Felix G. Arroyo — now the City’s Director of Human Services — who as a candidate made the City’s housing crisis his signature issue. Yet not even he seemed to have any answers to the crisis questions : when will the bridge be reopened ? when will the hospital operate again ? Where will the displaced people live ? 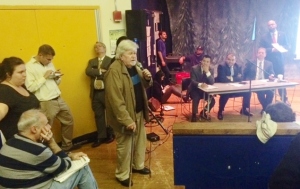 Several State Representatives were in the room. The speakers they listened to must have shocked : women in recovery, suddenly cut off from treatment; a homeless veteran, looking much older than his years, who testified to life on the streets in cold weather; another homeless man who has bounced from one shelter to another dealing with untrained counsellors and burdensome shelter rules; and several women whose testimony ranged from pitiful to shrieking, as they acted out their crisis situation.

Not often do we get to hear frrom, and see, homeless people gathered, testifying to City officials. For most of us, these folks either don’t exist, or do’t count, or annoy. Last night those who were in the Blackstone auditorium had to sit for several hours and listen to many, many witnesses to what it means to battle one crisis after another, hardness that most of us never have to deal with.

The bridge will be fixed. That was promised. But when ?

The crisis continues. people are living in gymnasiums, without lockers for their valuables and goods, without caregivers and with no idea of when their ordeal will end.

NOTE : the following lknk takes you to the Bridge Closing story at WBUR.