There’s a concept of “overreach” in politics, usually when ideologues or loyalists decide to double down… and ultimately alienate the center and lose the big contest:

– Question 2: expanded bottle bill. Everyone is used to the nickel on soda. I bet if the question had solely been to expand the nickel deposit to other drinks, it could’ve passed. But no, the environmentalists also had the indexing provision. The bogeyman of paying a 25 cent deposit freaked voters out.

– Coakl…ey: I get why certain unions wanted to reward Coakley for taking legal action on behalf of their members, but really, here we are again where Coakley was pushed through the Primary over candidates who would’ve done better in the general election. Enough already.

– Charter schools: my non-political 12-year-old who attends a charter school told me that he was voting in the school’s straw poll for Baker because, “Baker supports charter schools.” This, at a Boston charter where I’m sure most of the parents and staff are progressives or Dems. Lesson: Senator Chang-Diaz and some anti-ed-reform lefties in JP doubled-down last year and ground charters to a halt, with some inexplicable help from Deval Patrick’s Dept. of Ed. Did this provoke a major backlash? Of course not in terms of statewide numbers. But did it matter in a close election? Sure.

– public employee unions: the general policy of deny-deny-deny the need for reforms doesn’t hold water with regular voters. Baker was able to make the argument that he’ll be a better manager and that he’ll be a check/balance against the status quo of a Dem legislature, Dem governor and public sector unions that are overwhelmingly Dem supporters. 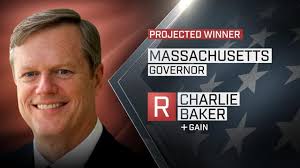 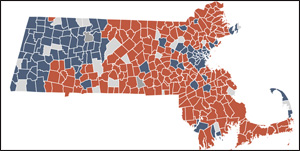 At last the year-long campaign to choose Massachusetts’s next Governor is over. Charlie Baker has won by two percent, a lead of 40,000 votes out of 2,040,000 cast (with 99% of precincts reporting.

It was closer than many expected, a bit closer than even I had anticipated. Though the loser, Martha Coakley, had seemed, as recently as a month ago, to have almost no campaign at all, during the time since, a campaign was put together for her, and she, somehow, found her voice, one that voters could actually connect to.

There was enthusiasm in her campaign, and several constituencies, and a tactic that made sense: concentrate on the 37 percent of Massachusetts voters who are Democrats.

Nor was it enough for Coakley to concentrate on Democrats. She had to give them a completely, almost only, Democratic agenda and she had to get them to actually come to the polls and vote. Thus the campaign’s embrace of the Democratic party’s most loyal interests – unions, left-wing advocacy groups, immigrants, and communities of color.

That concentrating her campaign on these very polarizing interests might isolate her from the state’s moderate, unorganized majority was a risk she had to take, and did take. After all, without them fully committed, she had no campaign at all, because she was – and remained – very unpopulkar with her own party. At the Democratic convention to choose a nominee, she won only 23 percent of delegate votes. She barely finished ahead of the third place candidate.

Coakley’s passionate army of ideologues, unions, and communities of color then targeted several cities in which many similar types of Democrats live : Boston, Cambridge, Somerville, Framingham Worcester, Springfied, Brockton, Lowell, New Bedford, Chelsea, Lawrence. She carried them all, and except in Boston, won them by a larger margin than she was accorded in her legendary US Senate loss to Scott Brown in 2010.

Yet if Coakley succeeded in assembling a real campaign and in meeting her targets, so did Baker. Between the two, there was no comparison : Baker was by far the stronger, more convincing candidate on almost all levels. And if Coakley’s campaign was about the Democratic Party, Baker’s was about the entire state and its needs.

Baker concentrated on winning independent voters, disaffected Democrats, and as many city voters as he could talk to. It worked. That Baker was able tol defeat the well-organized, ideological Coakley campaign was almost entirely his personal achievement. Yes, Baker had a strong boiler-room operation and more canvassers than any Massachusetts Republican campaign has deployed in at least 40 years; but “Team Baker” was no match for Coakley’s team, in numbers or intensity. Yet he did win.

Baker targeted several regions and surpassed Scott Brown’s 2010 margins in all. In Boston he won 31 percent; Brown took 27. In the Western suburbs of Boston south of Route 2, Baker topped Brown’s 2010 results by four to eight points. Baker campaigned all year long as the “North Shore candidate,” and he won the area by 15 points, five points better than Brown in 2010. He won big victories in Worcester County and all along the South Shore.

Baker appears to have won independents by 32 to 17 and captured the votes of 18 percent of Democrats. Those are numbers a Massachusetts Republican cannot fall short of and expect to win.

It was just barely big and wide enough to top Coakley’s own improvements. Just as the state’s long tradition of electing Governors independent of the Legislature’s dominant Democrats tops, but barely, our voters’ preference for the Democratic party over the Republican. It was a close-run thing but a decisive one. The Deval Patrick era on Beacon Hill is over.

Patrick is an idealist and an inspiring man; but he has had less success managing state services. There is often confusion on Beacon Hill between Governor and the legislature. That will now change. Baker is the most precise of men and as committed to reform as Patrick has been to inspiration. The moment now belongs to “Charlie.”