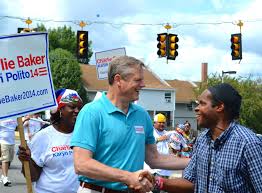 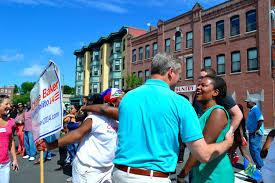 Charlie Baker’s 30.1 % of the Boston vote has been compared by most pundits to his 2100 vote, but the real comparison should be to Scott Brown’s 30 % in the 2010 special election that he won over Martha Coakley. In 2010, Baker was running against an incumbent seeking re-election. That’s an entirely different election from one in which no incumbent is running. I’d rather look at two races, both open seats, in which Martha Coakley was the candidate : because she is the Democrat, and Boston is supposed to be a Democratic citadel.

Looking at the two races, it’s clear that Charlie Baker succeeded in winning some moderate progressive votes that Scott Brown could not. The two men ended with almost the same percentage – Baker did slightly better, Coakley a couple of points worse – but the shape of the Baker vote was noticeably more moderate – call if reformist – than the Brown vote.

Baker succeeded even as he held onto almost all of the votes that Brown won in Boston’s most conservative neighborhoods.

Baker did much better in the North End than Brown managed. We like to think of the North End as little Italy, but most of these four precincts’ voters today are young professionals. In any case, Brown lost them to Coakley 1825 to 1961; Baker carried them handily., 1814 to 1553.

Stronger still was Baker’s improvement in Beacon Hill and the Back Bay. Brown lost these nine precincts 2909 to 4826; Baker almost won them : 3258 to 3610. (This despite – or maybe because of — St Rep Jay Livingstone, a smooth trendy guy, campaigning for Coakley wearing Union/SEIU drag.)

It helped Baker in these socially liberal precincts that he was not running on national issues in which the GOP has alienated so many. But votes are votes; Baker needed every one.

Baker’s seven to twenty point improvement in “new boston” precincts mirrored his eight to 20 point improvement in Boston’s western suburbs south of Route 2 : he lost Newton by 20, not 31; won Needham, Wellesley, Weston, and Wayland, towns no GOP candidate had carried since the 1990s.

These too were crucial gains. Without them, and his Roxbury vote, Baker would have lost the race.

Baker campaigned intensely in Roxbury. Despite having practically every political person in the area against him, and a campaign appearance for Coakley by First Lady Michelle Obama, Baker won more than double the percent of voters that Brown was able to get. Granted that the numbers for baker were still a drubbing : 621 to 7106. But that was much better than Brown’s 316 to 7169. Better, too, was baker’s total in Ward 14, the heart of Black boston. Scott Brown won only 3.5 percent : 207 to Coakley’s 5077. Baker doubled that, winning 7 percent : 411 to 5715.

The same is true of Baker’s relative success in Jamaica Plain, perhaps Boston’s most progressive neighborhood. Where Brown was beaten 1735 to 11,874, Baker won 2154 to Coakley’s 10,600. Brown managed 13 percent in Jamaica Plain; Baker, 18 percent. He needed every vote.

A two percent increase may not seem like big fish : but two percent was Baker’s margin statewide. It mattered.

Moreover, Baker’s campaign to Boston kept Coakley from improving her 2010 performance in our state’s biggest city even as, in her targeted cities outside the Boston area, she \bettered her 2010 percentages significantly.

In other parts of the city – Hyde Park, Roslindale, Dorchester, East Boston, Brighton – Baker and Brown won more or less the same percentage of vote. Baker won 36.5 percent in Brighton, brown 35.3 percent. Roslindale did Baker no favors : he lost its 12 precincts by 2119 to 6196. Brown actually did a bit better : 2175 to Coakley’s 5952. Hyde Park fared worse for Baker. He lost the neighborhood 1844 tio 3825, where Brown numbered 1988 to Coakley’s 3361. But these disappointing numbers were nonetheless enough, when added to Baker’s success in neighborhoods closely associated with “new Boston,” to give him that 30.1 % of the Boston vote without which his statewide margin might have fallen to recount territory.

The final total Boston results for the two men look so similar :

Yet appearances can deceive.