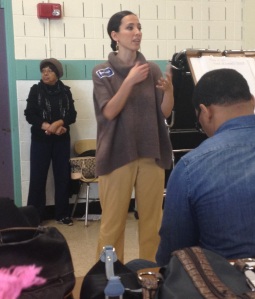 It pains me to read news recently that the chief reason why Massachusetts got busy creating charter schools was that 250,000,000 Federal dollars was at stake. I had thought that the creation of charters — schools privately run but publicly funded — was a matter of policy, not purchase. But now we read that bills in the legislature to expand the number of charter schools allowed is stalling, not because the policy has changed but because the Federal dollars aren’t there any more.

At the outset of President Obama’s first term, the education bureaucracy was all het up about “race to the top” and such like programs to improve student achievement. Money was gushing, and so were expectations. Now the money is heaving dry, and expectations have taken a skeptical swerve. The talk now is of “taking resources away from standard schoolS,” not of “improving achievement.”

You would think that “Taking resources away from standard schools” is teacher-speak for : the teachers’ union’s next contract won’t have a pay raise equal to raises granted the latest police or Firemen’s union contract. Right now, it doesn’t mean that. Mayor Walsh has added 39.6 million dollars to this year’s Boston Public Schools budget. Most of it will go to fund teachers’ pay raises. There will some millions left over. So, what does the phrase “taking resources away” mean now ? Probably just that the increased dollars won’t be coming from Washington. they’ll be raised locally. And that means that some other local aid funded need will have to make do with less.

Such is indeed the talk. In the Governor election going on in Massachusetts right now, all the talk is of local aid : increasing it; releasing 100 million dollars of it already collected but held; increasing it again. Candidates running for the State legislature or Senate all talk of local aid needs. The Department of Children & Families is in crisis; State transportation repairs and service upgrades cry out for attention; drivers’ licences for undocumented immigrants must be done. All these get mentioned ; but the big talk is, local aid, local aid, more local aid. You hear it whether the speaker is a Democrat or a Republican. Local aid now; the other matters can wait.

But education can’t wait. kids grow up. They graduate from grade to grade. Time delayed cannot be made good. Charter school waiting lists grow bigger, and the once ready Federal money river no longer flows into them. Thus we hear more of the same old arguments that were adduced at the outset for why charter schools shouldn’t be : they winnow their students, eliminating those with discipline problems and unwillingness to adapt; they don’t serve English language learners; they expel kids who don’t shape up academically; they impose rigid discipline. 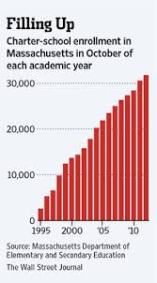 Legislation to increase the number of charters being stalled now — the chief staller being Boston State senator Sonia Chang-Diaz, who serves on the senate Education Committee — those that do exist are kind of on their own, to prove their worth. Charter parents will have to speak out; to organize. Democrats for Education Reform, the local chapter of a nationwide group deployed to power up the alternative-schools constituency, will have to get talking. My own strong belief is that education in America needed badly to reshape itself enormously, to conform to the new workplace, new jobs, new technology and new communities of competitive collaboration. If schools exist to do anything, it’s to prepare students for the jobs of tomorrow (and for citizenship : but that’s a more traditional matter and doesn’t require an entire re-think). The best way to get schools shaped for that end is to try out many different shapes — school day lengths, curriculum choices, and out-of-school after-work — and see which one or ones meet the challenge. Charters, partnerships, collaborations, and, yes, standard public schools all have a seat at this particular table, and all should be set upon the task.

Did I mention curricula ? The battle is raging already to reject the national education establishment’s “common core” as being too difficult for children to master and too narrowly tested. Myself, having read through the “common core proposal, I find it a trope, a slice of common sense. Every society with schools at all has had a common core curriculum; it’s how that society prepares its children for the jobs it offers. this was as true of Rome in year 300 A.D. as of western Europe in year 1090 A.D. and 1500 A.D., and it was the basis of the New England School Law of 1634. Children must learn a common basic curriculum in order to do the jobs that will need to hire them; and to be good citizens. Is it difficult ? It always was. Life, too, is difficult. Tears come to one’s eyes as well as joy.

Kids can manage. They really can. as for testing, well : every job that a student is given as an employee is a test, believe me. So don’t complain; just do it. And please, don’t use lack of money as an excuse not to.

Time for Liam Kerr, Richard Stutman, Citizens for Public Schools, and Stand For Children to loosen up, set the past behind,and re-imagine the teaching of knowledge to children grasping at it.

As for teacher pay and standard school budgets, in Boston these look paid for — this year. After that, a lot depends on who the next School Superintendent will be. The “search committee” is already on it, but for me, the best choice is John McDonough, the current “interim superintendent,’ who says he doesn’t want to be considered for the permanent job : but whom all sides respect and who can therefore best steer “standard Boston public schools,” troubled schools as well, into the next phase, alongside charters as they are and all manner of experimental school set-ups that innovators may successfully propose — as they surely will, and should.