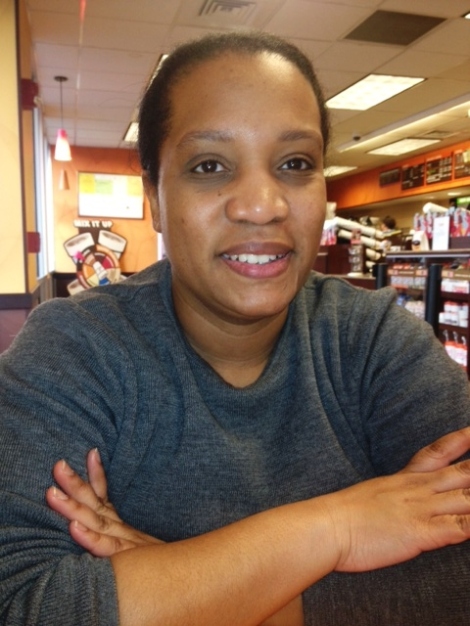 Yesterday I had an hour long talk with the candidate said by some to be the favorite in this four-person race: Karen Charles-Peterson of Percival Street on Meeting house Hill. She is said to be the favorite because she has the support of Charlotte Golar-Richie, who finished a strong third in last year’s Mayor race and who herself served as 5th Suffolk state Representative. Charles-Peterson does in fact have Golar-Richie’s endorsement and that of Nelson Merced, who also once represented the District.

n this District the Golar-Richie imprimatur is not the whole story, not even the largest part. In that same Mayor race last year, John barros drew many more votes than Golar-Richie within the 5th’s precincts; and Barros — or his key supporters — are said to be lining up for one of Charles-Peterson’s opponents. Nor are her other two rivals lacking in strong activist support. Thus nothing is assured, and Charles-Peterson has to earn a victory, not simply cruise to it.

Charles-Peterson has a long resume of government service in Boston. She worked in the late City Councillor Bruce Bolling’s office and helped direct his campaign for Mayor back then. She then joined state government, topping off a long career as Chief of staff at three agencies, including the Registry of Motor Vehicles and Executive Office of Transportation.

(Disclosure : Charles-Peterson was for a time a television producer at WGBH, the station to whose news branch I report on a correspondent basis.)

Those who care about “roots in the District” should note that Charles-Peterson grew up in the district and has long family ties thereto. Her grandparents lived on Olney Street in the Bowdoin-Geneva neighborhood, her parents on Ridgewood Street, near Fields Corner. They later moved back to olney Street, where Charles-Peterson was born. She remembers the ward 15 hearty of the 5th all the way back to the 1960s, when Dom Pasiucco was its state house voice — she notes seeing a framed picture of him in the foyer of an assisted living facility she campaigned at.

Service to 5th District voters who remember Pasciucco being a given, Charles-Peterson moves on to tell me her three priorities as a legislator, and why :

“First is public safety,’ she says. “Too many of our people live insecurely. Just this year we ssaw an uptick in the number of murders, and many happen right in this district. Though as a legislator i’m called on to vote on bills that affect the whole state, I intend to initiate action on guns, because they’re a problem everywhere, not just here in the 5th. We have to craft the gun laws to the needs of public safety.”

Does Charles-Peterson then support the gun control legislation up for enactment riught now ? She tells me that yes, she does.

“Second is education. i don ‘t support raising the charter cap,’ says the candidate, “but I support univeesal pre-kindergarten, yes. as for common ciore, we already have a better curriculum, why not stick with it ?”

“Third is jobs” — Charlers-Peterson says it with passion and a sigh — “voters time and again tell me, ‘Karen, I’m without a job, I would like to work, what can you do to help me ?’ Well, there’s much that I can do as a legsilator,’ says the candidate. “Part of my role is to know what prograns are out there — such as career centers — and to find out if they are working, and if they aren’t, then work to fix them. Because people who want to work should be able to get a job, even a part time job !”

I decide to mention the Massachusetts DCF to her. what of its failures and needs / isn’t this a priority ?

“Of course,” she says, ‘but it all ties in tyo me three priorities. families in crisus because of no jobs, or inadequate education, or living in unsafety — either as a crime victim or with a family membver who may be involved in dtrime — it all burdens the DCF and overtaxes its staff.”

Education, we both agree, is needed; so I show her a comment that a suburban technology executive posted on my facebook thread, abiyut having given up on Boston school graduates and relying on H i b visas for his technoliogy hires. She reads the entire cvomment and then says, “Ok, it’s ftrustrating –“

“No, not angry; frustrated,” she affirms. “How do we get our kids to the point that they can compete with the H 1 B visas ? I have to reach out to executives with attitudes like his. I need to find out what brought him to this point. I need to get our (district’s) kids to his point.”

The primary comes on April 1st, twenty days from today. It isn’t much time to wake up the District’s voters, many of them disconnected from power, busy with family crises every day, working to pay survival bills. It’s especially little time given that there’s only one candidate Forum currently on offer, at the iconic First Parish Church on Meeting house Hill, Sunday March 23rd.