Today, January 11th, Democratic governor hopeful Don Berwick tours the West. His day begins in Athol, moves to Orange, then over the mountains to Williamstown; the afternoon and evening find him in Springfield, Chicopee, and Palmer. That is a lot of driving, but how else is a statewide candidate to reach out to activists spread across three counties that, combined, comprise about 20 % of Massachusetts’s population ? You can’t helicopter it; trains don ‘t carry people any more; taking the bus seems just a bit wack. So you drive. Berwick has been driving a lot lately. Cape Cod has seen him quite often, the Merrimack valley, even Tea party-laden Worcester County. Tireless he is, this medical man who has a bedside physician’s touch for people he meets.

Peripatetics alone should earn Berwick a high place in the list of hot political properties. Berwick has also attracted solid money this month : $ 62,849 since January 5th. Yet a fourth place man he seems. Attorney General Martha Coakley has twenty times the state-wide clout, as she wields the investigatory poewers of her office. State Treasurer Steve Grossman has the big bucks — don’t be fooled by his raising only $ 13,122.96 this past week; his mid-month report is likely to show a solid dollar haul.. Whoever you talk to, they’ll tell you that Grossman and Coakley own the top two spots in the Democratic part of the governor race. Then there’s Juliette Kayyem. She hasn’t raised as many shekels even as Berwick, much less Coakley or Grossman — though her last week’s $ 39,115.68 merits notice — but on social media she’s the champion of charisma — has more followers than anyone but the seasoned Coakley and, if current tends continue much, will soon pass her too. Kayyem is a physical presence too : eye-catchingly fashionable, and willing to push the style envelope, she could easily be an Oscar actress. She’s the female version of Scott Brown — and a policy wonk besides.

If all else were equal, Kayyem would easily grab the largest number of Democratic delegates at the upcoming caucuses and go on to face Charlie Baker — no slouch in the charisma department himself. But Democratic activists run Masachusetts; they are not amateurs, and no matter how strongly Kayyem may appeal to their idealistic paint, many — probably most — listen not to their paint but to their posts and beams, the basic structure that is the State government which they build and maintain. The carpenter in them knows that Coakley or Grossman already occupy the building and know where its doors and stairways turn up.

Dr. Berwick at least has the health care constituencies to himself. They’ve been his go-to all his adult life and into his government career. They know him, and he knows them. Who does Kayyem have to compare ? I suppose that social media is in itself an interest group these days; and very much a Democratic-leaning one; and them, she has. I run into Kayyem supporters when I’m online far more frequently than supporters of Berwick, Grossman , and Coakley combinbed. But social media people do not overlap very well with caucus goers, many of whom are elderly or professorial and temperamentally at odds with social-speak. Thus both Kayyem and Berwick are toughing it out speaking to 50 people at a gathering or even just 20. It’s like building a sand castle one grain at a time, but there’s no other way for them to climb the castle wall within which lurk Grossman and Coakley.

The caucuses lead to the Democratic convention, at which a candidate must win 15 % at least of the voting delegates. If not, their names won’t be on the Primary ballot. Important to caucus goers are the policy plans, articulated at length, that both Berwick and Kayyem are issuing on their websites. (Grossman too.) A delegate may or may not give kudos to any of these plans; but their issuance at least assures a potential delegate that the candidate offering them is ready — maybe — to govern on Day One. But who to commit to ? We will soon know. 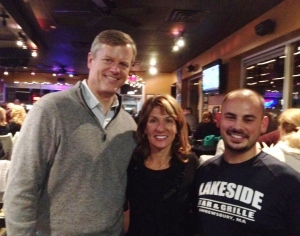 I mentioned Charlie Baker. How is he doing, you ask ? From where I sit typing, he looks doing quite well. He and his running mate Karyn Polito have raised as much money as the Democratic money champ, Steve Grossman. Baker even has a primary cahllenger, a Tea party true believer — “gun rights,’ anti-immigrant, “voter ID,” blame-the-poor : the whole Tea-angry talk show — whose presence in the Republican race frees up Baker to be the moderate problem-solver that Massachusetts voters like.

Baker has given us much more lollipop than the chippy curve he pitched at folks four years ago. He presses the flesh and seems to like it. He mixes with people. He visits cities, even Boston, and talks city issues almost like a Mayor. He has begun to offer policy papers as worthy as, or better, than those of Kayyem, Berwick, and Grossman. He is running almost as if he were competing right now with all four potential democratic winners; and in fact he is competing with them right now. The Tea party, which will, hopefully, split off to one of the several protest candidates on the November ballot, represents about one third of Republican voters. The other two thirds, who form Baker’s core, amount to no more than eight percent of those who will vote for Governor in November. He’ll need to convince plenty of Democrats that he is a better choice than Grossman, Coakley, Kayyem, or Berwick; and the surest way to do that is to do it now, when all four are in the field.

Massachusetts voters often choose Republican governors as a check on our one-party legislature. The four governors prior to Deval Patrick were all GOP. Baker has history on his side. Yet it still might not be enough. Grossman and Kayyem look very strong to me at this time, as strong as Baker; and Berwick stands not far behind them.