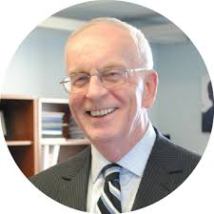 ^ the gentle face of an underestimated reformer ? John McDonough just might be he

Who should be Boston’s next public schools Superintendent ? A recent article in Commonwealth Magazine got me thinking that it should be the man who already IS the ‘super” : John McDonough.

The 40-year BPS employee now holds that job on an interim basis. He has said he won’t apply for the permanent job. He should rethink that decision.

Mayor Walsh’s first budget plans a $ 39.6 million increase for the BPS. Most of that added funding will, however, be devoured by contracted pay increases for BPS teachers. Hardly any money will remain for facilities upgrades, new technologies, an extended school day. The allocation of these increased funds to pay hikes asks an obvious question : is the mission of Boston’s public schools primarily to raise teachers’ pay ?

For that question John McDonough has, says the Commonwealth magazine article, a workable response. If we are to pay teachers top dollar, and spend almost no added funds on anything else in the schools, the least we can insist upon is superior teacher performance. McDonough, says the article, has a strategy : give the principal of every Boston public school autonomy to hire whom he or she wants. He admits that his decision is risky. Because many of the system’s underperforming reachers have tenure, they cannot be fired. If no school principal wnats them they will simply have to be reassigned to something, or (as the Commonwealth story puts it) paid not to teach.

Paying union employees with contractual rights not to work is nothing new. When the nation’s railroads were losing their passenger customers, many railroad workers ended up being paid not to work. But the BPS situation is different : the number of “customers” — school kids — is increasing, not declining. What is wanted is not fewer workers but better workers. In short, the dreaded “performance evaluation” standard that the Boston Teachers Union resists.

It will be difficult enough for McDonough, the quiestest of leaders, to achieve such a huge changer in the culture of BPS work. His insider position might just make all the difference. When I first met him again — I had known him back in the day when I worked for elected school committeemen — on last year’s Mayor campaign, he was sitting at a table in the cafeteria of BTU headquarters, in the company of former BTU president Ed Doherty and current BTU activist Shirley Pedone — both long known by me. Neither Doherty nor Pedone is shy about pushing the entire BTU agenda; but they and McDonough go back a long time, obviously on a friendly basis, as fellow BPS employees. It matters. Difficult it is to imagine an outside superintendent hired by “nationwide search” being so easily casual with BTU activists. 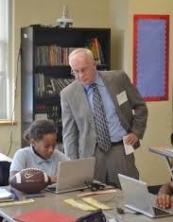 How many BPS bosses as readily liked by BTU activists as McDonough also have the confidence of John Connolly ?  One of Connolly’s campaign themes was to break up the central BPS bureaucracy. Yet, says Commonwealth, “John Connolly, who campaigned to be the education mayor, says he is a big believer in McDonough. ‘John was often the only high-level voice of reason inside BPS,’ Connolly wrote in a December e-mail while away on a post-campaign vacation. ‘He wants to do the right things and he knows BPS inside out. If John is given the backing, he won’t hesitate to clean house and make critical changes that really should happen before the next superintendent is hired.'”

This has already happened, as the Commonwealth article notes, at the John Marshall school on Corona Street in Boston’s Bowdoin-Geneva neighborhood. There an outside non-profit, Unlocking Potential (UP), was brought in to re-think and manage. UP terminated every one of the John Marshall’s employees and hired back only three. All of its new teachers were thus young — some very young. This had several beneficial consequences : ( 1 ) Because the new teachers were young, they were paid less even as BTU members, saving scarce budget money ( 2 ) Because the school day was longer, it engaged more of the students’ day to day life ( 3 ) because the teachers were so young, their method and technological awareness were up to date. (This latter is something that I have previously opined in favor of : that teachers of skills and skill thinking should be as young and new to teaching as possible, not the other way around.) Not surprisingly, a much higher percentage of John Marshall students — of whom 99 % are of color — achieved high marks. As for the teachers who were displaced, some found teaching jobs elsewhere, some took other work within the system, others left teaching entirely.

McDonough says that he will not allow displaced teachers to go unused. “There’s plenty of work within our system,” he told Commonwelath. Yet he knows that his principals’ autonomy decision makes teacher tenure — a core union contract principle — look an obstacle. The BTU won’t allow tenure to be put at risk in future contracts ; but McDonough, and only he, may just be able to negotiate a buy-out of some tenure, or a reclassification, so that tenure won’t force young, exciting, cutting edge teachers into not being rehired — as it famously already has done. I’m not bullish that a superintendent outside-hired could get this work rule reform done at all.

It’s going to be a difficult enough task even for John McDonough’s soft-spoken, career-long determination. As John Connolly remarked to Commonwealth, “‘That said, I am always wary of BPS statements about changes to teacher hiring and placement rules, timelines, and policy. There is so much off-the-radar deal making and just plain skirting of the rules behind the scenes that undermine supposed changes. In sum, I won’t believe anything has changed until I see it actually happening’.”

Connolly’s skepticism is warranted. The BTU opposes many of the changes that have already happened, much less those proposed. I see no sign, either, that Mayor Walsh wants a difficult enough City budget made even more difficult by any kind of fight with the BTU. At best, an outside hire will need much time just to learn what’s going on. at worst, she might stumble negligently into a huge avoidable fight. That won’t happen with McDonough at the helm.