—- —- —
It’s no secret that we have long preferred the Steve Wynn casino to the Mohegan Sun/Suffolk Downs casino. Nothing that either team has issued recently by ay of publicity, or testified to at the gaming Commission, changes our mind. We continue to favor the Steve Wynn casino and its Everett location. These are our reasons ;

1. location. advantage Wynn, big time. The Boston casino must attract high rollers and tourists. A Downtown Boston location would have been the right choice ; if it were up to us, we’d put the Boston casino in the present State Transportation Building in Park Square. As that won’t happen, the next best choice is Wynn’s Everett because his casino and hotel will front on the Mystic River at its widest. That’s a much better setting than Mohegan Sun’s Suffolk Downs, located inland amidst oil tanks, truck terminals, airport parking lots, marsh, and middle-class and working-class residences densely set already. The Suffolk Downs acreage is already bounded by heavy traffic; putting a casino on it can only magnify the congestion, with no great offsetting benefit.

2. transportation. no advantage to either. Rapid transit and highways run directly to both casino locations. Granted that Wynn’s Everett is less convenient to travelers arriving by logan Airport. Two subway lines are needed rather than Suffolk Downs’s one. But how many casino goers arrive by subway in any case ? An effective casino wants high rollers and big spending tourists. These will much more likely taxi to the casino than come by rapidv transit.

3. jobs. advantage Wynn. Though both casino proposals envision thousands of jobs, and certainly Boston can use the number and variety of positions that will be filled, a job seeker wants some assurance that his job will last for a good while. Wynn’s pockets are hugely deep, his staying power unquestioned, his location likely to be a hit with customers. Mohegan Sun’s pockets are deep too, but we question how many of its casino jobs will truly be available to the public rather than taken by tribe members.

4. the plan itself. advantage Wynn. Though the Mohegan Sun proposal dazzles the eye, we agree with Wynn that a vertical hotel services its guests far more efficiently than one built horizontally. Were Suffolk Downs’s proposal truly a seaside resort — on Revere Beach, for instance — the verticality of Wynn’s competing hotel would count for less. But the Mohegan Sun building is not a seaside one; a seaside motif somehow doesn’t get there.

5. ego; the personal. big advantage Wynn. Whatever an inn, hotel, or casino may be, it arises from the host and guest relationship, one of the most fundamental in all human societies. People coming to a casino and hotel baren’t just shoppers; they are guests and see themsleves as such, and as guests, they want to be hosted by a host; a person striking, memorable. Steve Wynn is that. He has an ego ? Yes; that’s what a great host should have. His voice of welcome should be a big one, a loud one, larger than life, as his hotel / casino is large. Mohegan Sun has only its architecture and its amenities. Attractive they will surely be; but where is the big ego, the master host welcoming his guests with stories of hanging out with Frank Sinatra ?

6. local support. huge advantage Wynn. Revere voted narrowly for a Revere casino; East Boston voted against participating. Meanwhile, Everett voted 11 to one in favor of an Everett casino. Everett may be a small city, but it swung a big bat in this game.

^ Mayor Carlo DeMaria of Everett with his guy. Who says that little guys can’t win ?

Finally, we also find Steve Wynn’s suggestion persuasive, that Mohegan Sun has every incentive to steer its high-rolling customers to its Connecticut casino complex because, there, it doesn’t have to share revenue with the State as radically as Massachsetts’s gaming laws require. Its very plan implies favoring Connecticut. A seaside motif but no actual seaside. a setting in the middle of industrial muddle and highway blah. The Suffolk downs proposal looks and feels like junior varsity compared to Mohegan Sun’s brilliant Connecticut locus.

I understand that Boston stands to gain more advantageous mitigation money (and jobs, maybe) from the Suffolk Downs proposal than from Wynn’s. I also understand that Wynn’s casino will dramatically impact traffic congestion in Charlestown Neck and along Rutherford Avenue. But plans are already on the table — worthy plans — to re-purpose Charlestown Neck completely; the Wynn casino might render these plans more urgent and get them built more quickly. Nor will the Wynn casino lack for jobs available to Boston people. After the Mohegan sun project finishes hiring tribal members, there might actually be more jobs publicly availble at Wynn. Lastly, I understand that Suffolk Downs’s race track is hurting, as horse racing loses a changing public, and that the Mohegan Sun casino would hugely revive Suffolk Downs’s economic power. Yet the Downs does not lack for profitable options. For one thing, it can be developed for housing, even as a mini city like Co-op City in the Bronx, New York.

We may yet learn things about Steve Wynn’s proposal that would require we change our mind. Absent that, we’re on Steve Wynn’s team.

Performing in Boston for the first time since Spring 2012, Florence, Italy’s Stefano Noferini dropped a two hour set on a dance floor less than full but more than devoted to his sound. Using a pc program running two channels only, swiping the mixboard’s knobs up and down constantly, Noferini pumped out two separate one-hour sets : the first, clanking dark techno almost 1980s industrial in texture; the second, a brighter tone plus a peppy step done in a major key. Noferini’s first hour sounded like giant robots growling amidst various kinds of jawbone booming — fantastical and seductive; his second sounded lithe and joyous, unexpected by the dancers but convincing enough to those who gave it a chance.

But back, for the moment, to the gargantuan. No techno master sports a construct as roomy as Noferini. Big and heavy, his signature sound surrounds, from underneath and all sides. His first hour featured Noferini at his rumbly biggest : “Giocotto” and “Oula” and portions of “That Sound,” his collaboration with the UK’s Mark Knight, as well as tracks by the techno DJs who he likes (and these are many; few track makers with a sound as headstrong as Noferini collaborate with as diverse musicians). He pushed and pulled textures and sound spreads, now squeezing the music narrowly, now ballooning it out, always of knife-edge shapes with cavernous interiors. Psychedelic it was. Smooth the flow, rough the content. Part of Noferini’s first hour spilled only the basics of clank and reverb; at other times tiny chips of percussion sparkled in the mix, echo-effected like sequins glinting in a dance floor light show; and all of it segued segment to segment as if changes of shape were the natural order of things.

Many DJs change key and texture as Noferini did, in mid set. For most, it’s a risky move ; why deviate from what’s already working ? So it was with Noferini. Not everybody at RISE followed his turn from boomy choogle to high steps — from drama to drone, if you will. But with a screamy break, a kind of fireworks effect, he made the leap to a sound brighter and nimbler than what fans are used to. This was the Noferini of “You Can Do It’ and his current number one download, “The End,” tracks internally complex in which sound patterns face off with one another — a kind of texture tone repartee. Voice plays scant part in Noferini’s signature sound, but there was lots of talk in his set’s second hour. “Where are all the Lakers fans ?” went one tool-in; “it’s nothing” and “who’s in my house ?” went two others. And though only about half the RISE Club dancers decided to stay in Noferini’s house, there was no stopping thus remnant. They found that this veteran of more than 30 years as a DJ can twist and shuffle, juggle and jiggle the mix all he likes without stubbing his toe — or yours. Few DJs can play against type without sounding at least partially fake; Noferini showed that he can house things up just fine — when he wants to. 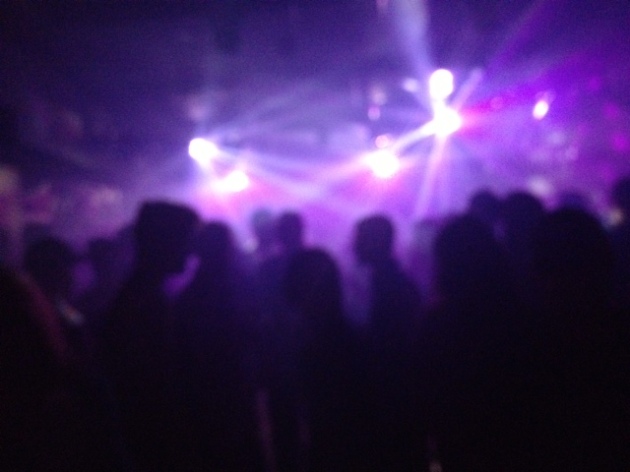