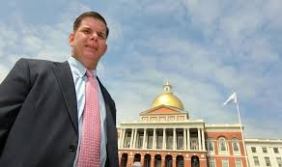 Yesterday in its editorial, the Boston Herald made two endorsements for Mayor: Dan Conley and John Connolly. I have no quarrel with their doing so. They should endorse. What upsets me is their going on to NON-endorse candidate Marty Walsh. That is harsh. Unfair was their reason : that until recently he has been the Boston Building Trades Council Business manager — a Union guy — and thus, said the editorial, not a friend of taxpayers.

This is bogus. Completely bogus.

Union workers pay taxes, don’t they ? They earn a solid paycheck, and thus they pay a lot of taxes. So what’s the Herald talking about ?

What is so wring with that ? Yes, all taxpayers, not just union workers, pay into the higher hourly wage mandated by the Pacheco Law. Non-union workers would, it is true, cost less. And if that were the whole story, the Herald might have a point.

Except that that IS NOT the whole story. Union workers who earn the prevailing wage do not stuff their extra money into suitcases. They spend it. They enter the discretionary economy — where economic growth most flourishes — to buy discretionary things and thus help tons of businesses to exist, to hire their own workers, and — hopefully — to pay those workers well.

That is how a growth economy works and why a reductionist economy doesn’t. A growth economy isn’t just me and my wallet, you and your bills. A flourishing economy involves all of us who are in it. Money doesn’t stay put in any economy. It moves constantly, into my pocket, out of my pocket; into yours, out of yours; then on to the next and the next and so on. The more money that moves the more freely, the better an economy is for everyone.

To reduce construction workers — to reduce ANY workers, and here I specifically include fast-food workers, who are now seeking $ 15.00 an hour and should have it — to the lowest doable wage is to reduce the economy, to starve it of what it lives by. Is that what we want ? Really ? i think not.

Right now our economy is growing much more slowly than it should because a huge portion of the pay being earned in it is going to CEO’s and hedge fund managers an ever-decreasing amount of said pay is going to everyone else. An economy cannot grow — can hardly exist — if only a tiny few have money to participate in it. Is this not basic Economics 101 ?

Right-wing pundits blame unions for the problems besetting municipal budgets and the slow growth of private-sector jobs. They are wrong. Unions are nothing more than workers banding together to force reluctant employers to grant them fair earnings. Workers earning a collectively bargained income do not crater municipal budgets. That’s the consequence of many other events, the housing bear market especially.

As for employers’ wage policies, not all take a reductionist view. Many employers understand that a well-paid work team is an asset to a business. well paid workers don’t leave the job as quickly; and turnover is a huge — and largely avoidable — cost to businesses beset by it. Well paid workers also suffer less stress; and an unstressed work team is healthier, thus less likely to call out sick, and better motivated. How have these basic economic conditions been so sweepingly un-learned in today’s America ?

That Marty Walsh is a union guy is a good thing. Endorse him, or not, that’s fine. We at Here and Sphere haven’t yet endorsed, and it may not be Walsh whom we end up supporting. But please, do not dis-endorse him because he is and was a business manager for Boston’s Building Trades Council.