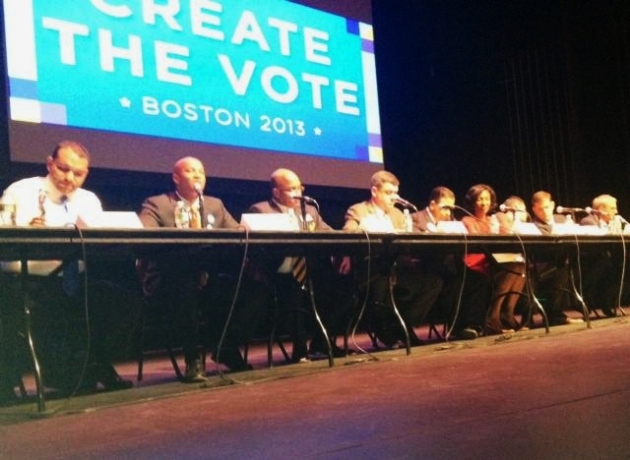 ^ so many would-be mayors, so few Will-be’s…

Bostonians had not one but two Mayor Forums to attend to tonight. First came Create the Vote’s Forum on Arts, Culture, and Creativity. Half an hour later came the campaign’s first televised debate, hosted by Joe Battenfield of the Boston Herald. Nine of the twelve hopefuls answered questions at Create the Vote’s Forum — Dan Conley, David Wyatt, and Charles Yancey missed out. All twelve took part in the televised debate.

Very little ground was covered in either Forum that earlier Forums had not already addressed. There were, of course, some specific questions that several candidates gave obviously ad hoc responses to. Yet none of the candidates surprised. All gave answers, to every question, well within the range of their agendas already long since worked out in admirable detail. This was as true of the Herald debate — of which we saw only part — as of the Arts Forum. 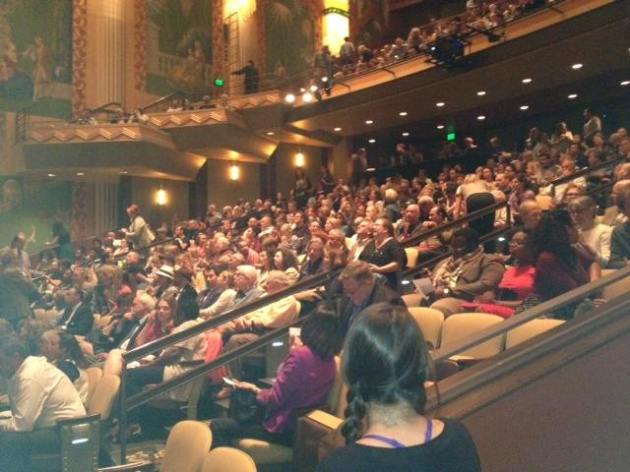 ^ large audience — and fully aware of what it wanted to hear

The differences tonight were the size of the audience and the command that the various candidates demonstrated in applying their respective agendas to the specific questions. Here was surprise. Felix Arroyo’s soft-spoken, highly personal narratives did not often command the same attention in these Forum’s big-hall and aggressively moderated formats that he easily wielded in earlier, more intimate Forums. His best moment was his paean to the Jamaica plain Music Festival, which he had attended the previous day.

John Barros, too, gave less developed answers to questions than his usual. Barros has a message of change that requires time to explicate. Given little time, he resorted to quips and smiles as a kind of narrative shorthand that, probably, those seeing him for the first time missed the significance of. He also overreached noticeably when, in response to a question about arts classes in Boston schools, he said, “no kid should be allowed to graduate high school without at least one arts class.”

Surprising, too, was the Arts Forum audience’s applause for Bill Walczak, who repeated, with hardly any new elaboration, his usual mantras : he’s from Codman Square, and he’s against the casino.

Charlotte Golar-Richie had strong moments — “I will be an arts Mayor,’ she promised; “I aspired to BE an artist. I will partner with non-profits to raise arts funds, and I will establish a blueprint for the arts. It’s a social and an economic driver.” But her response to a question, “what were your two most memorable moneys in the arts,” was less inspired: “watching neighborhood kids do the Nutcracker.” Rob Consalvo’s responses sounded entirely generic — “we must assure every kid has arts classes…the budget must include cultural affairs” — except to that “memorable moments question, in which he cited his home area of Hyde Park for its Riverside Theater, perhaps Boston’s most notable community stage play company. 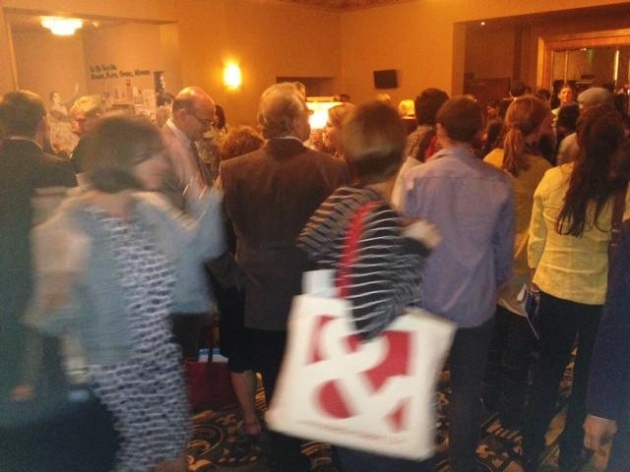 ^ no food in the foyer this time, but drinks were served and much conversation was exchanged.

In both Forums, command honors went to Marty Walsh and John Connolly; Mike Ross also spoke authoritatively at the Arts Forum. All three men have made it quite clear that they have a vision of the mayor’s office broad as well as deep, detailed as well as thematic.

Ross’s best moment — though he had many — was his response to the memorable arts question : “I am an oil painter. My oils hang on my walls at home…(Yes) arts in every school,” he added. “We need arts and festivals of the arts, and we need in our affordable housing plan housing that includes for artists !” Much applause greeted this answer, and justly; hardly any artist living in Boston is not one step away from not being able to afford the place he or she lives in.

Marty Walsh answered every arts question clearly, concisely, but his best, most original moment responded to a question “which city outside Boston do you look to for inspiration ?” “Montreal,” Walsh said without hesitation. “What they do: public arts and festivals all year round, all over the city. Here in Boston we struggle just to keep First Night !” He is right about Montreal, which hosts a Film Festival, the Juste Pour Rire comedy festival, one of the world’s largest international Jazz Festivals, and two Franco-folies festivals (of francophone pop music. Montreal’s not a city that many Mayor candidates would think of when answering this question. Walsh gets it.

His best applause arose from his answer to a question about raising the city’s arts budget. (Every candidate agreed that this should be done.) Said Walsh, “Change the culture of the BRA ! Create an office of economic planning so that arts can be included (directly) in planning !”

Connolly, too, answered this question memorably : “We spend one one-hundredth of a percent of our budget on the arts. Lobby the legislature for more funds ! we need to work with institutions (in the city), so that if they invest in the arts…and yes, use the capital budget, to build an arts infrastructure !” the applause was loud and long.

Connolly promised to raise the office of city arts commissioner to cabinet status and, as he says at every Forum, to “make the office user friendly, like an apple store.” The line continues to be a good one.

Entirely missing from the arts Forum was any discussion of performance difficulties in Boston : no late night transit, the 2:00 A.M. closing hour — and the milling around as clubs empty their patrons onto streets with no transport option except scarce taxis; fights sometimes ensue; or the expense of parking, the racism in Theater District nightclubs, problems with bouncers. Not to mention drug mishaps that shut down entertainment arts. Nothing of all of this was discussed at the only Forum where it seemed to be a vital part of the purpose…

The Herald debate offered the candidates scant opportunity to explain at length or to imagine and create. With twelve on stage, it was difficulty enough to give the candidates time enough to say “hi.’ (David Wyatt almost didn’t say even that, bit that’s how he is at every Forum he decides to attend.) in any case, the real action in this campaign is no longer in the Forums but outside, on the street. Forums worked during August, when the campaigns were just beginning to ramp up. Now, the ramp is so up it tweaks the heavens. Every candidate with any semblance of seriousness spends all day now doing meet and greets, shaking hands at T stations and at supermarkets. The truly ramped up go to house parties two and three a night, shake hands at bingos, go to street parties, block parties, hold fund raiders, even rallies. And they door-knock, while their volunteers phone-call to voters from phone banks. They garner big endorsements and hold press conferences to announce them. And their volunteers do huge stand-outs — sign-holds — that you cannot miss. Sometimes competing stand-outs buffet the traveler along various neighborhoods’ main streets.

^ the real campaign was outside the theater, on the street.

The many Boston City Council candidates are doing the same thing.

We will continue to cover the Mayor Forums as they take place — including two Forums tomorrow. That said, we will, from Wednesday morning on, shift our focus to covering the campaign where it is most heated: on the streets where voters live, dine, work, and shop.