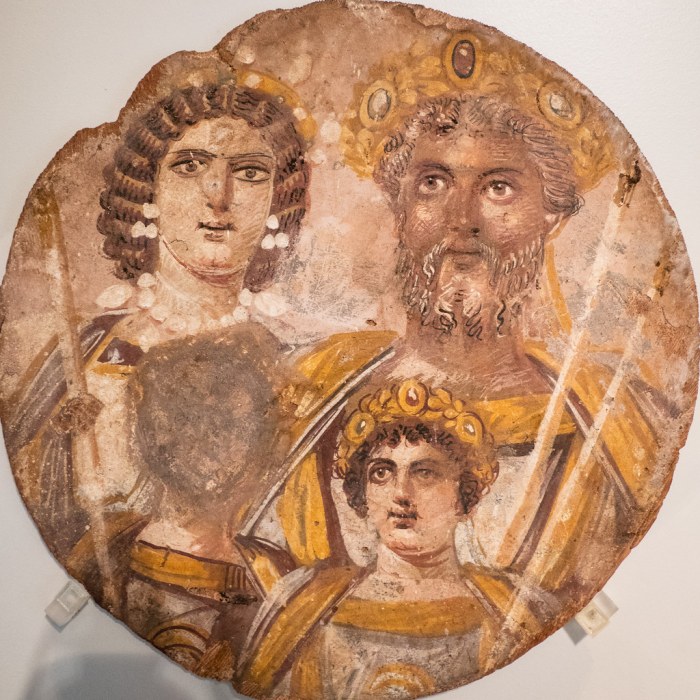 ^ Septimius Severus with his wife Julia Domna and his son Caracalla

Septimius Severus, the Roman Empire’s only Africa-born Emperor, lay on his death bed in York, England. The year was AD 211. His son Caracalla was at his side, about to succeed to the Imperial purple. To Caracalla, Severus said these words : “reward the soldiers, despise all others.”

Severus had practiced that principle. He had ruled the empire since April of AD 193 — 18 years, a long stretch for emperors then. He was now 67 years old, a long life for hat time in which plague regularly visited the citizenry. He had risen through the ranks of the formidable Roman army, and after the chaos of the year 192, following the assassination of Commodus, Severus, by then commander of the 14th Legion (XIV Gemina), defeated all rivals to claim the throne. He acquired it by harsh rule and kept it severely — an adjective we derive from his own nickname. How did he keep it, when so many cosplay emperors found themselves dumped by the City’s Praetorian Guard ?

He kept it by rewarding the soldiers, despising all others.

By “despising” he did not mean hating. He meant not worrying about what “the others” could do to his rule as long as he had the army’s unquestioning loyalty.

Now we come to Donald J. Trump, whose presidency, such as it is, has moved into the AD 192 phase. I say 192 because I think Mr. Trump’s corrupt, mercurial incompetence more resembles the bluffers who Severus displaced — Pertinax, Didius Julianus —  than he does Severus. Nonetheless, Mr. Trump now has the army at his command, if he can keep it. So far, that’s a given. General Milley and rest of the US military like the current mob rule awash in many cities no better than Trump does.

Mr. Trump has an opportunity now to attempt what Severus managed : impose military dictatorship AND allow mob rule. Severus didn’t care what the city mob (from the term “mobile vulgus” in Latin, the turbulent rabble) of Rome did day to day and night to night so long a it did not challenge the military. As long as the grain shipments from Egypt weren’t interfered with, or the movement of legions long the autobahns of the empire, as long as the Temples and government buildings of Rome weren’t put to the torch or sacked,. all was OK.

It was a libertarian rule, even a libertine one. The City mob was fed and provided with brutal arena games; the Senatorial order was allowed to pretend it still had power, which it was glad to pretend, since it held uncontested ownership of farms and production, much of it operated by slaves kidnapped from the empire’s enemies after battle. (There really wasn’t much of that by 192-211, which would rock the empire’s ruling consensus in the next century.) Commerce was scarcely regulated — but highly taxed, often by surprise. The City’s officials held uncontested authority over established avenues of information by controlling those appointed to the office of “auspex” (whence we get our adjective “auspiciuous”)

It was, for a time, a very successful system.

Today, in America, there are three constituencies with power :

( 1 ) the mob and the Black Lives Matter protesters, whose remarkable operations the mob exploits with impunity, so far

( 2 ) the established forces of order : City police, State police, the National Guard, and the military. All are more or less military in application right now, and will become entirely so shortly

( 3 ) everybody else, powerless in the streets but possessing, through the right to vote, the power to elevate one or the other of the first two forces and reject the other.

So far, number ( 3 ) is led by Joe Biden, the Democratic nominee for our equivalent of the Severan office. Biden is a decent guy, a nice, well-meaning guy who really, really wants everybody to be at peace and thinking uplifting thoughts. So did Pertinax, the aged Senator who in 192 was elected emperor by the Senate only to be bankrupted by the Praetorians and assassinated by them when he had no more bank to give. Joe Biden, if he wins our Severan office, is heading straight into the fate of Pertinax — not to be assassinated or bankrupted, but to be politically bankrupted and neutered by his own activists, who hold Praetorian power over him. The “Black Lives Matter ecstatics never wanted Joe in the first place, almost all of them supported Bernie Sanders, and they accept Joe today only on sufferance : that if Joe wins the election, they can force his hand, probably, if need be, by the same means they are now using to make him their policy captive.

I really feel for Joe. I am supporting him, because he IS that nice, decent guy who believes in America’s Constitutional ideals, as do I, and who has lived them his whole life, and because I could not, would never, have anything to do with Mr., Sanders, whose would-have-been presidency we are now getting a taste of. I say i am supporting Joe, but I am very bearish on his being able,  if elected, to accomplish what he so badly wants to, because his victory in November will only increase, not diminish, the power of the street activists and the mob-rule parasites who feed off them.

Yet how can I support Mr. Trump — how can anybody ? — given his utter incompetence at anything, his bellowing, every day, that it is all about HIS power, HIS ego, HIS amour propre. In this, he is more like Commodus than like Severus : just a vain, spoiled son of an always absent, if brilliant, father, whose rule was about nothing and was ended by his own supporters. There isn’t anyone who thinks that Mr. Trump commands the military out of loyalty to some ideal or policy purpose. For him, at this time, it’s nothing but power for the sake of power, a kind of instrumental fetish. I can’t imagine that at some time, probably sooner rather than later, the military will start transferring its confidence to Mr. Biden, who at least does speak for the ordinary voter and lacks only power at street level.

Were this to happen, Mr. Biden might become more than a new Pertinax. He might have actual power to command and thus to change the political equation. Thereby giving new meaning to “reward the soldiers, despise all others.”