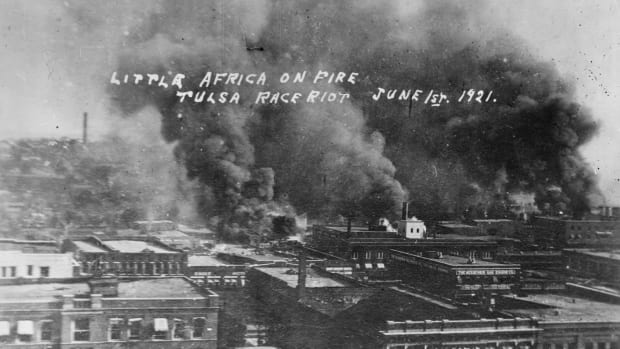 ^ Tulsa’s Greenwood neighborhood burns to the ground, destroying an entire community of Black Americans. 1921 and still an open wound

NOTE : This is the FIRST REVISED VERSION of my plan originally published in early June.

What follows is the most feasible plan that I can devise given the limitations of time and sources. That said, I have thought about the matter of compensation for many months, ever since I read about the Lynching Museum established in Alabama by my fellow Princetonian, Byron Stevenson (Class of ’85). Because I have been mulling over,. for months, the details of such a plan, it should be evident  — and I insist upon it — in no way arise from the chaos of the last week. Indeed, said chaos has actually delayed the writing hereof. I am profoundly skeptical of the entire “Black Lives Matter” movement, a thing that appears to me both political and hypocritical. From what I have seen, Black police lives do not “matter,” nor the lives or property  of Black shopkeepers, many of whom have been targeted by rioters parasiting Black Lives Matter protests. Black police have, in fact, been cursed, spat upon, beaten up, and even killed by participants in some protests. As a result, I write this article in spite of, not because of, the tragedies that I have seen or read about.

That said, let us proceed to the plan itself.

The case —>> after the enactment of Amendments 13, 14 and 15 to the Constitution, and also the Civil Rights Acts of 1867 to 1875, the nation made clear its resolve that Black Americans were fully citizens of the nation AND of the State of their residence. These Amendments and laws annulled the Dred Scott decision (7 to 2) in which citizenship was found to be legally impossible, under the Constitution, for Americans of African descent to acquire. As full citizens, Blacks were thus fully empowered to sue at law for wrongs committed against them and to receive money damages if successful.

From  1875 to 1965, and in some cases after 1965 as well, Black American citizens were denied their rights to live in pace, even to live at all, and to amass wealth and acquire property. Some 4,000 Black citizens were lynch-murdered; many others suffered property damage and/or were subject to inferior schools, inferior health services (or not at all); and all who thus suffered were set back in their rightful quest for wealth even as their white citizen neighbors faced no such impediments or wrongs. Besides actual lynchings, there were several outright race riots, in 1919 to 1921 especially, in which entire Black communities ere wiped out, including business and homes, not to mention the thousands killed or injured.

Every such incident documented gives rise to a prima facie case in tort, by which, via the common law established in every State, an aggrieved may be awarded both actual damages and punitive damages. That these wrongs mostly occurred long ago is no bar to recovery, for it is an established principle that the time for bringing a suit in tort is tolled by any number of factors, one of which is impossibility. For the better part of these past 140-150 years, Black citizens have been unable to present a case and win a fair hearing on these charges, either by intimidation, lack of resources to pay for lawyers, and the press of trying simply to stay alive disadvantaged by the consequences of these sweeping, community-wide wrongs.

So much for the statute of limitations and standing to sue arguments.

The judgment —->> I do not propose an actual class action lawsuit. That might be done, but for the purposes of this article I propose Congressional legislation. There are no readily identifiable individual defendants who might b sued, and even if so, few would posses the means to pay the level of money damages I think are rightly due.

In the legislation I propose are the following provisions :

( 1 ) all Americans descended from those granted citizenship by the acts of 1865 to 1875 are empowered to bring claims under the act. (The class of such claimants might well include people who live as white, because inter-marriage (and extra-marital relations) since 1865-1875 has occurred, and such wrongs as have impacted any citizen intermarried to a person wronged has had his or her opportunities diminished.)

( 2 ) Claimants will have to establish, by a preponderance of evidence, the extent of damage their ancestors (and they) have suffered by way of the wrongs enumerated in the legislation. Thus each claimant will, if successful, be compensated in an amount directly related to his or her individual circumstances. There will be no collective compensation. (See below for my reasons.)

( 3 ) Claimants will have fifteen years (15) from date of the law’s enactment in which to bring a claim.

( 4 ) where feasible, the House and Senate Judiciary Committees shall research the histories documenting lynchings, riots, denials of adequate schooling or health services and the like. The committees shall issue their reports no later than five ( 5 ) years after enactment of the legislation. There shall; be public hearings from time to time in which persons with pertinent information shall testify on the various issues presented herein.

The award —->> there are, potentially, maybe 35 million claimants. Over a century and a half, four million enfranchised Black persons have  begotten an enormous number of descendants ! How much should each successful claimant — maybe 10,000,000 people — be entitled to ? A LOT of compensation. A reasonable standard would be : the difference in family net worth of a claimant and that of the average white citizen. If the figures I’ve read are correct, that is a sizable award : as much as $ 175,000 per claimant.

It sounds like a whole lot, and it is. It’s a huge transfer of wealth from the nation as a whole to one segment of its citizens. But is it any less than the measure of wrongs flung upon Black Americans these past 140-150 years ? I think not. I think the figure is actually quite reasonable.

It will not be easy to win public support for this initiative, much less for a national payout of $ 1,750,000,000, all of it taxpayer money. Yet in my opinion, it is both fair and smart. The more wealth that 10,00,000 Black Americans have, the more they can spend into the discretionary economy. Think of this legislation as another economic stimulus plan — that is also an act of justice accordant with our nation’s ideals for which enormous numbers of us have given their lives.

(from above) why I do not allow collective compensation

A significant difficulty with this entire plan is establishing exactly who may be entitled to claim an award. Immediately, if one says, “any claimant who is Black,” one runs afoul of racist legislation, even of apartheid. Who is black, anyway ? Those with dark skin ? Plenty of people with dark skin are not descended from American slaves; and plenty of people descended therefrom don’t have dark skin. Were we to create a single award pool, how would we specify who is entitled to share in it ? I cannot think of any general category that does not create injustice for some as well, as a completely racist precedent.

We cannot allow our laws to attempt definitions of who is black. Any such law is by definition racist, a kind of 1935 Nuremburg law. There is no other way to establish an award process than to require qualification by descent alone. The economic disadvantages resulting from 155 years of unjust treatment affected every descendant of slaves regardless of who they or their descendants married, or begat children with. Some descendants may have suffered less economic disadvantage, others more ? That is the way of reality, and the compensation law that I envision must take reality into account. Thus descent, not skin color, is the only just qualification any compensation law can admit of.