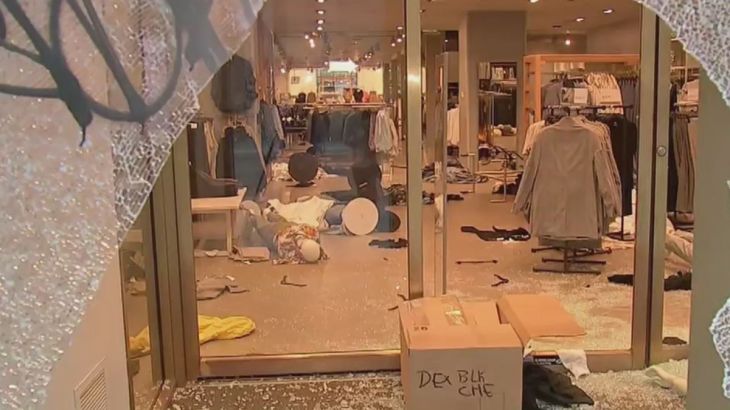 What happened in Boston last night has angered me and very likely angered you as well. Thus I may well write stuff in this column that would not appear were I more at peace, and you may want to correct me, even call me out. Nonetheless, I write.

Thousands of us gathered yesterday to march in solidarity with a very basic American principle : that justice should protect every man, every woman, equally and faithfully, and that no one of us should ever be abused by those we entrust to protect us from harm. In Minneapolis, a young man named George Floyd was denied his rights to the benefits of this principle. This we all acknowledge and decry.

Unfortunately, some cities proved utterly unprepared for the horrors that befell them in the aftermath of very justified protests of the treatment of Mr. Floyd. It should by now be basic operating procedure, for any city, that when huge numbers of people are expected to gather, for any reason, that the City’s police forces are fully mobilized and at the ready, close by every part of the gathering route, supported by State police and, on standby, that State’s National Guard. None of this happened correctly in any City that I observed. Minneapolis was caught absolutely flat-footed, taking four days to assemble and deploy all the force at its command.

It sure did not happen in Boston either.

There are many reasons for this failure. High among them is the City’s unwillingness to give our police the men and equipment they need to face rioters in this time of riot. A lot of us have leveled oceans of blame — deservedly — at President Trump’s administration for its unreadiness for the COVID outbreak. How come these same blamers can’t blame cities for their equally limp-legged unreadiness for riot ? The first cities attacked by riot might merit some measure of excuse for being surprised (although I’m unwilling to let them off that hook. You HAVE to be ready for the unthinkable.) But Boston’s leaders had FIVE DAYS to prepare. We knew what was coming. Why were we not ready ?

Did we think that the good will — and evident naivete — of the protest organizers, most of them Democratic Socialists (check their twitter handles) for whom George Floyd’s death was a convenient pretext for intimidating electeds in anticipation of next year’s Mayoral contest, would carry the day ? The protest was set to begin at 6.30 pm. Dark would be arriving soon. After dark, the current protests have almost all turned to mob violence, as groups with agendas much more radical than that of the Democratic Socialists, unleash their kraken.

Yet the protest in Boston took place Downtown, in a very constricted geographical area, surrounded by water on three sides, that should have been duck soup to encircle with overwhelming force. The various areas of stores within that small zone are not many; they too could have been defended. They were not, because the City’s forces were far too few.

Later, when the City did finally have sufficient force,. it didn’t use them aggressively. Looters, once inside stores,.were easy to trap and surround and arrest; the tires of their getaway vehicles should have been shot out. None of this happened for three hours after the looting began. Granted that because the City hadn’t sufficient force to surround the looters, they broke out and looted in many locations. That is still no reason why the police, now aided by national guard, could not have deployed on the obvious shopping streets and blocked the rabble from getting onto them. Once the forces did, finally, start to wage these tactics, they found plenty of crimers to arrest– 55 in all, said Police Commissioner Bill Gross today.

It should have been a lot more.

I am also unable to grasp why Cities have not declared martial law, under which anyone found criming can be shot on sight. You cannot play games with rioters. Martial law was imposed on crimers in New Orleans after Hurricane Katrina; why not for the Floyd rioters ?

It’s hard not to conclude that Cities have played nice guy with these rioters because everybody in power is in apology mode, self-blaming for “systemic racism,” that, I guess, they must be a part of, and therefore, maybe in their minds having their constituents’ property destroyed is their punishment for being “systemically racist.” If you feel that you are a racist and that you need to atone publicly for your failures,. you’re in no state of mind to wreak the havoc on those who can’t wait to take advantage of 500 elected suckers.

The mea culpa caper has been in charge in Boston. We see the result.

Look : the protests really aren’t about George Floyd. He is mainly a pretext for the protesters’ far more ambitious agenda of radical imposition. How come the huge protest only now ? Didn’t a hundred previous police overreaches, including killings, engender this level of outcry ? Why now ? Can it be because there’s an election coming, and the protesters hope to fill Congress with their sympaticos ?

I leave these questions up in the air on purpose. Do your own thinking on them. Yet wherever you come down on an answer, is there any doubt that George Floyd has absolutely nothing to do with the crimers ? They came to loot, to burn, to riot. No more no less. Theirs is a politics of anarchy, of utter nil. We appease them at our peril.