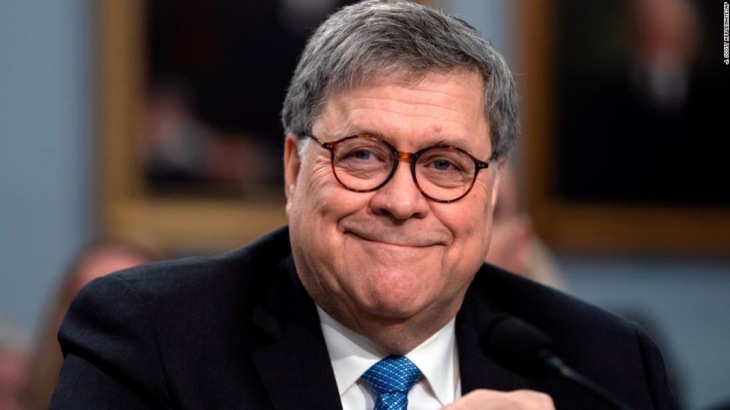 When Bill Barr became Attorney General in 2018, he immediately set to work changing Mr. Trump’s hitherto ad-libbed Presidency. Until Barr took control of the nation’s justice system, MrTrump had ruled by personal grievance : firing this one, threatening that one, grousing and insulting by gut instinct and unpredictable as to time or place. There was no method to his madness and no plan in his petulance. He pissed off everybody without counting the numbers. and the result was a wipeout of Republican Congresspeople in the 2018 election, a damning Mueller Report, and— much too late to work—a vote to impeach.

Barr in office changed everything. He implemented, from his first day, his version of a “unitary executive” — a theory of Presidential management that had already  gained much support as a curb upon the autonomy of Federal administrative agencies. As a practical argument, the “unitary executive” plan has much to recommend it. The concept is, that only the President may make executive rulings; that agencies charged with carrying out Congress’s laws are not empowered to put their own interpretations upon those laws except express Presidential approval. The reasoning is that administrative bodies are not elected and thus not permitted  make changes to laws enacted by officers who are elected : because anyone aggrieved by an adverse administrative ruling has only indirect recourse.

This application of the “unitary executive” idea has found much favor with judges of Federal Courts. Judges have, in many cases, found administrative agencies using their regulatory powers too liberally, so as to distort, or overstep, the intent of the Federal laws they are charged with administering. Given the complexity of Federal regulation, it is not surprising that administrators have sought to enact procedures that they feel fit their appointed tasks : but the Courts have said that that is not a sufficient standard: that they must conform to the parameters of the laws.

All of the above I am sure seems reasonable to you as to me. Yet some “unitary executive” advocates apply its admonitions to the Presidency itself, arguing that, as Article 2: Section 2 says “HE shall take Care that the “Laws  e faithfully executed,” on,y the President himself can make administrative, executors decisions, and that no action taken by another administrative officer has no force unless ordered by the President only —because – Sotheby’s argument goes—on,y he is accountable to Article 2.

From here it is only a short step to AG Barr’s dictum that only the President has discretion, as o subord8 age officerhad, to execute the la wsss he sees fit. And from there it is only another short step to holding that, as the President has discretion how best to administer the Laws, Congress, having enacted those Laws, can’t oversee how the President is doing things. After all, who of us likes to be given a task only to find the task giver telling us how to do it ?

When the Mueller Report was published, Barr had already succeeded Jeff Sessions as AG. He immediately set to work to neither Mueller’s damning narratives.  ueller’s report was, in every way, an impeachment referral, but because he did not say so directly, Barr was able to deliver his own interpretation. Barr could not allow the special counsel’s report to generate action, because Mueller was Presidential oversight, and under Bar’s view Congressional oversight of  the Presidency is unComstitutional.

That  was the beginning of what has now  become essentially a Barr Presidency. Oversight of Mr Trump’s-official acts cannot be allowed, and therefore Congressional requests for testimony by Trump administrators will not be honored, nor will Congressional subpoenas : all are “privileged,” in Barr’s view.

Impeachment at first looked to be a big problem fir the Barr Presidency, because it is expressly called for in the Constitution. But here, Mr Trump used his own, independent, demagogic power— enabled by technology ** — his twitter account feeding directly the tastes of his 45 million followers — to rally against potential Republican defections from an acquittal :and in the end, only Senator  itt Romney defected.

Perhaps it was the battle situation of impeachment that convinced Trump that he had no choice but to govern by Barr’s one man rule — unalloyed despotism. In any case, that sis what he has done. The year since Barr came to office has seen Gru,p adopt every feature of “unitary” rule : people who oppose his cockamamie notions are fired; those who act in service to the “rule of law” are sent packing. Congress 8s told to take a hike. Executive agencies either carry out Trump’s ignorant or contradictory orders or see their top executives reassigned. FBI agents ho insist on oversight are fired and  publicly defamed.

The Roger Stone and General Flynn cases make sense given this background. When Flynn was first indicted, pursuant to the Mueller investigation, with Jeff Sessoions — who had been a US Attorney and aSenator under the old, Constitutional dispensation –  as AG, everything  followed the old rules. Mr. Trump  agreed that Flynn had lied and to Vice President Pence, Flynn pled guilty, and he faced a stuff sentence recommended by the prosecution. Stone, too, was thus indicted, and he, too, was headed for justice.

If oversight of Mr Trump was out, and the rule of law veered to “I am the law,” then it was foolish of Flynn to accept a long jail sentence, especially to when he could see the Barr Justice Department overrule it’s own case prosecutors a d call forS6one t9 receive a $lap on the wrist. Thus Flynn  over to withdraw his guilty plea”and —waddaya know — the JusticeDepartment, citing interrogation notes, moved to dismiss the Flynn case are entirely !

Thus a man who subverted the nation’s foreign policy (just as Trump has done the same, often), took $ 500,000 from the Turks to effect a kidnapping on their behalf —  not much different from what theSaudis wanted to do to Jamal Khashoggi — and lied about it or concealed it from our authorities— all in violation of several Federal laws— is free to serve “Ia  the law”

I take AG Barr at his word that he is not implementing despotism for Trump’s sake but for the Presidency itself. Trye, one man Ruhr is very much what Trump wants. But Barr has not fed his principle solely to Trump’s appetite. He wants fur the rest of time a President free act as he sees fit, cleared of all oversight by anyone, subject solely to a quadrennial “consent of the governed,” as Senator Lamar Alexander put it in defense of his vote not to convict Trump at his impeachment trial.

It is a Hobbesian policy that assumes a world controlled by unconquerable evils that leave mankind no space for hope or better things. It is profoundly un-American, is in fact the negation of America and of the partnership that our Constitution requires between governed and governors.

Whatever the “unitary executive” theory may tell us about the proper role of administrative agencies of-the Executive, Barr’s autocrat erosion is not it.

** Reference is made to what Albert Speer had to say at his Nuremberg trial about technology’s enabling of one man despotism. It can be read on pp 520-521 of his memoir INSIDE THE THIRD REICH, the chapter styled “Vonclusions.”