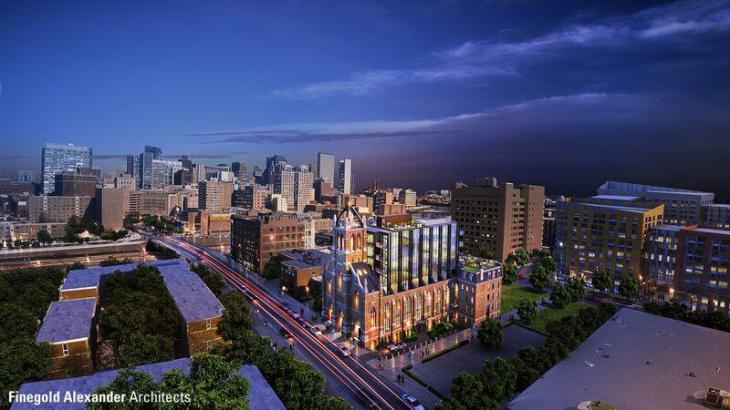 ^ as far as the eye can see, Boston is booming its population and its money chase. Can any of us cope ? What about those left behind in the small towns and outlying cities ?

According to a forecast published by the City, Boston by year 2030 will have over 800,000 residents — up from barely 625,000 in 2000. 175,000 additional people means much more commerce in Boston and proportionally less the farther you travel from Downtown.

It’s a kind of gold rush, like every other gold rush. Ever since cities acme to be, and commerce arose within them, people have left wherever they were and moved into those cities to get on board the commerce train. Its why cities grow. Boston in 2018 is no different in that regard than New York in 1787, 1820, or 1890; than Florence in the 13th and 14th centuries; than Lyon and Paris in the 12th Century; than Rome in the age of Augustus, Milan in Ambrose’s time, Babylon in the 5th century BC, Ur in the fourth and third millenium BC. Cities are hubs of money.

I’ll discuss the major adjustments that Boston faces, and will continue to face, in this and the next 12 years. Before I do that, however, what of those of us who do not move to the cities ? Who are left behind in towns losing population, where businesses that serve the public are forced to shut down for loss of customers ?In the 19th century many small towns found economic viability by location on a river, which meant water power to drive a mill. Lowell, Lawrence, Manchester (New Hampshire), Fitchburg, Gardner, Maynard, Uxbridge, Milford, even Grovesnordale, Torrington, Shelton, and Waterbury in Connecticut all grew to prosperity and in population thereby. Today, however, river power has lost its prominence, and all of these once booming small cities have declined substantially or forced themselves into complete re-purposing. As for towns even smaller, most of these in New England peaked in population in the 1830s, before the rise of riverside mill cities and the Gold Rush of 1848, each of which decimated towns strictly agricultural. Throughout New England one finds stone walls, once boundary to adjacent farms, falling to ruin amid woods, the farms once tilled now tolled, the rural roads long disused and overgrown with new forest.

Forty years ago, before the move that many city folk took to rural peace as craftspeople and gentle-person farmers, these rural New England towns were Appalachia poor. Many still are. Inland Maine is one of the lowest income regions in the entire United States. In forgotten mill towns like Newport, New Hampshire or North Adams, or Erving, or Skowhegan, Maine and Barton and Orleans, Vermont, one sees Caucasian people with grey skin, tell tale sign of malnourishment, and/or buildings abandoned to the elements. Granted that these are extreme examples : most rural or exurban communities maintain a marginal but persistent economic existence. Orange and Clinton, Massachusetts, Bennington and Pittsfield in New Hampshire, Sanford and Bangor in Maine, Barre in Vermont — all continue on, despite loss of population and an almost complete lack of 21st century technology jobs.

The economy of these places could not be more different from that of Boston, and it is very difficult for public policy to do much about it. In Fall River you can rent a three bedroom apartment for $ 1000; in Holyoke, $ 800; in Ludlow and Blackstone, the same or less. Massachusetts now has a $ 15/hour minimum wage law (the higher figure to be in force by 2023). In Fall River, that’s a very generous wage. In Boston, not nearly enough. As for the jobs, in Boston there’s a labor shortage; in Fitchburg, Springfield, and Hopedale a job lack. Granted, that Governor baker has moved smartly these past four years to establish education-to-job, workforce development systems in areas far away from core Boston, and he’s also established, or encouraged, transportation expansions therein; yet no Governor can overcome the laws of market. The money is rushing into Boston, and perhaps now into Worcester as well, and money goes to money. Investors do not gamble with their millions, nor with huge bank loans; they want to have a pretty dependable twenty year run ahead of their monthly loan payments. In Boston, they can count on at least 20 years, as the Mayor has made it city policy to add 69,000 new housing units by 2030. 69,000 new residences means maybe 120,000 new people, and an investor can feel quite confident of this happening because there are hundreds of investors investing alongside him, and there are hundreds of businesses forming in the city or moving to it (example: GE.)

Someday, most likely, people will begin to leave the city and its supercharged bustle in search of exurban or rural peace of mind. Who doesn’t want to raise a family in a town blessed with open space, a river, good hiking, and a school that isn’t overburdened ? Yet until that happens, Boston will boom with newcomer and already here’s, and with the jobs and six-figure salaries that rush to Downtown like iron filings to a magnet: while those who stay in the communities losing people to Boston (and Worcester) will have to commute long distances — and longer distances — to the only jobs that pay enough to fund a decent life.

Meanwhile, what of Boston ? Adding 125,000 new people means ( 1 ) politically, adding two, maybe three State Representative seats and most of one additional State Senate District. And subtracting those from outlying communities ( 2 ) imposing enormous pressure on an MBTA system that will take another seven or eight years just to reach “state of good repair” status; expansion of lines will be needed as well as increased number of trains, buses and employees ( 3 ) increases in residential density that will dislocate many neighborhoods — several have already undergone this change — and impact quality of life for those who grew up in the neighborhoods with expectations of life quality that will now be abandoned.

City life rarely stands still. The current boom has huge undertow, dragging most of us into its deep quicker than we can outrun it. It’s well and good to chase money. I do it too. We all do it. Yet what happens when the chase favors the luckier, and the rest of us have to play catch up when catching up has by-passed us ?