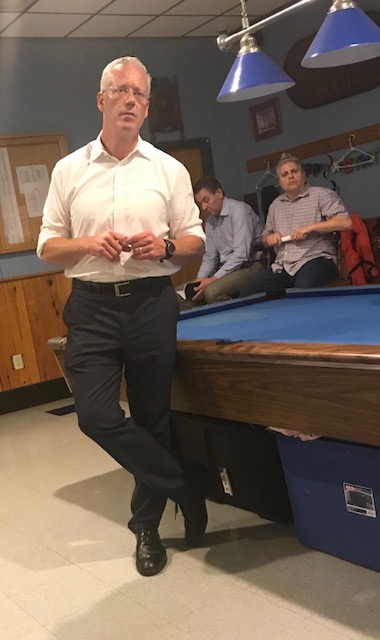 Last night, at the Jeffries Point Neighborhood Association’s monthly meeting, neighbors heard once again from Tom O’Brien, founding partner and managing director of HYM, the developer of the 161 acres that had housed Suffolk Downs for 100 years. (I say “once again” because O’Brien and his project team have appeared numerous times at neighborhood meetings throughout East Boston starting last year, when the Suffolk Downs project first unveiled.) Those of us who’ve heard from O’Brien for many months know the proposal quite well. What was new last night,m at least to me, was the development’s impact upon our area’s public transportation system. It will be major.

According to slides that O’Brien displayed, Suffolk Downs, with its 10,000 new housing units, will cause ridership on the Blue Line to double during peak hours. O’Brien noted that the Blue Line holds two of its 14 full six-car trains in reserve: and that math does not add up. If O’Brien’s ridership forecast comes to pass, the Blue Line might need 12 additional trains, not two.

The HYM display also includes major rebuilding of Route 1-A, a road already jammed up at peak hours. Not all of HYM’s 10,000 new housing units will be occupied by car owners, but many will, and perhaps most. Where will their commute routes take them through ? Clearly Route 1-A will need some restructure. As for the three Harbor tunnels, one hardly dares picture the mess. Right now tunnel-bound traffic experiences delays of up to one hour, inbound in the morning, home-bound at night. I have many times found myself stuck in said jams; it ain’t fun.

Governor Baker has a pretty good handle on upgrading the current MBTA as well as plans to increase bus service and extend the Green Line. I’ve written often the details of his MBTA program. Yet when I spoke to him on Sunday about “what are we gonna do, for transportation, about the additional 100,000 people who will live in Boston soon,” he said “it never ends, does it ?” — a sense that no matter what we are able to do, it will never be enough as long as Boston continues to boom beyond all expectation and attract ever more residents, not to mention commuters and shoppers. So when I asked O’Brien if he had worked out any of his project’s transportation impacts with Baker’s office, I was hoping that he would tell us details of a work-out. He did not provide one, although he did praise MassDOT secretary Stephanie Pollock’s knowledge and effectiveness.

I will be talking at length with O’Brien about his transportation impacts, specifically about what Baker’s office is willing to include on his MBTA upgrade agenda. as we all know, the estimated cost of bringing the current MBTA system to “SGR” (state of good repair) is about $ 7.8 billion, of which about $ 2 billion has so far been spent, chiefly on track repair, signaling, digitizing trains and schedules, and new cars for the Orange and Red Lines. How much additional will the expansions cost that the Suffolk Downs project will require ? That depends on deciding specifics of the expansion, first; has any agreement between HYM and the State been arrived at ? If so, what are the cost estimates ? O’Brien decried the voters’ repeal of gas tax indexing: yet would those finds, amount purely speculative, have borne more than a small piece of what is coming ? I doubt it.

So we shall see where this goes. I’ll publish details of my ta=lk with To m O’Brien as soon as it happens.