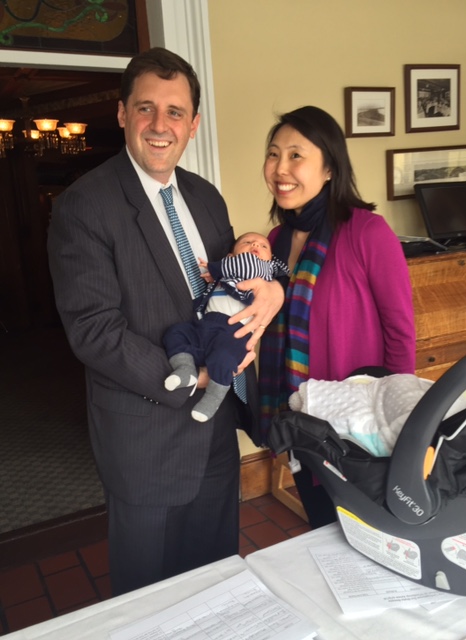 No election that we at Here and Sphere have covered has been as difficult to evaluate as the seven-candidate contest to pick a successor to Anthony Petrucelli, who resigned in January as the District’s Senator. All seven candidates would give the District’s voters solid representation. But voters can only choose one; and so must we. Our choice is Jay Livingstone, who serves presently as Boston Ward 5’s Representative in the House.

This was not the choice that we expected to make. Livingstone, as a Beacon Hill / Back Bay legislator, stands well outside the core voter groups this District was drawn to favor and which its predecessor Districts have favored since the 1950s. But campaigns matter, and as this one has developed, Livingstone’s “outsider” situation has changed from disadvantage to advantage. That advantage, which I shall outline below, is the first reason why we endorse him.

I’m referring to a “campaign within the campaign.” Dan Rizzo, who served as Revere’s Mayor, faces off with Joe Boncore, Winthrop Housing Authority member, doing battle over the big-ticket schools issues that are agitating the entire state : ( 1 ) should the numbers cap on charter schools be lifted ? ( 2 ) should standard public schools receive more funds, and if so, where from ? Mayor Walsh and Governor Baker have weighed in heavily on Rizzo’s side, because he supports charter cap lift, as do they; meanwhile the Boston Teachers Union, charter schools’ most stubborn opponent, has endorsed Boncore.

The campaign over charter schools and school funding has driven Rizzo’s and Boncore’s campaigns into a corner — one that their intense, District-wide campaigning has not remedied. Schools issues are certainly major — to us at Here and Sphere as well; yet they’re hardly the only priority the District’s Senator must legislate. On these other issues, it’s far from clear where Rizzo or Boncore stand, or the priority that they will accord to : immigrant rights, the $ 15 minimum wage, additional opioid addiction legislation, MBTA reform, and state budget discipline. (Boncore’s BTU endorsement strongly suggests he will seek new taxes for a system that needs to cut costs, not expand them. On “just cause” eviction, a Boston matter, Boncore is clearly opposed [as are we], Rizzo hesitates, so far, to commit.)

The BTU contract is up for renegotiation right now; last thing Mayor Walsh needs is for the BTU to claim, at the outset of this negotiation, victory for its candidate in an election affecting four of Boston’s key neighborhoods.

Livingstone, meanwhile, has been free to talk, convincingly, about all sorts of legislative matters big and small; and he has done so, at Forum after Forum, with cool competence that demonstrates knowledge of issues and process. He has also amassed a sizeable army of volunteers, most of them quite new to local politics, but also some revered local families : people not consumed by one issue, nor swept into the tribal vortex of Rizzo versus Boncore — so reminiscent, to many, of the Mike LoPresti – Mario Umana grudge matches that divided this District not all that long ago. From Revere and Winthrop to the North End and East Boston, the Livingstone people I have met see him as I see him : comprehensively competent  and hard working.

The second reason that we endorse Jay Livingstone : he is the candidate most demonstrably committed to Governor Baker’s reforms. In the legislature this past year, Livingstone has voted for all of Baker’s major legislation : MBTA Reform, including the creation of a Fiscal Control Board and suspension of the so-called “Pacheco Law”; opioid addiction treatment; repeal of automatic driver license suspension for people convicted of drug use crimes; increased DCF staffing / funding;  and, biggest of all, both the FY 2016 and FY 2017 state budgets, including the “no new taxes, no new fees” criterion insisted upon.

Given his record to date, Livingstone could be a more reliable supporter of Governor Baker’s state governance reforms than Dan Rizzo, who although he does support charter school cap lift, does not, in Forums, always argue its case with as much conviction, or accuracy, as he could.

For both these reasons — his solid record of support for Governor Baker’s state reforms and budget principles, and his commitment to, and knowledge of, a variety of major legislative matters, we are proud to endorse Jay Livingstone to be the District’s next state Senator.

And what of the other six candidates ?

( 1 ) Of them, we have already discussed two. If schools reforms are the only mission that you will vote on, we urge a vote for Dan Rizzo: because we, too, support charter schools cap lift. It should also matter to schools-issue voters that Rizzo has the Governor’s confidence. That is no small matter in a District that enjoys strong ties to Baker politically and benefits from it.

( 2 ) As for the other four candidates, we would like to see their campaigns give voice to interests not so prominent in the big pictures I have outlined above. Of these, the most successful has been Lydia Edwards, an immigration attorney and East Boston homeowner, whose top priority is to give strong voice to those in the District who are not often heard, or heard at all : immigrants and low income workers. Those who operate the levers of political power in Massachusetts count votes ruthlessly; a sizeable vote for Lydia Edwards will convince the power people that there’s a constituency in this District that needs much more policy attention paid to it.

This is not to say that Diana Hwang, Paul Rogers and, to a lesser extent, Steve Morabito have not highlighted significant interests. They have. Hwang and Rogers both represent a new breed of technology-centered candidates using social media networking as a tool for policy progress. Yet I see this sort of campaign as a priority for a future time, not now. For now, the tried and true avenues to policy discussion and implementation hold sway, and in that venue, Jay Livingstone has the greatest command. For most voters in the District, he is the best choice.