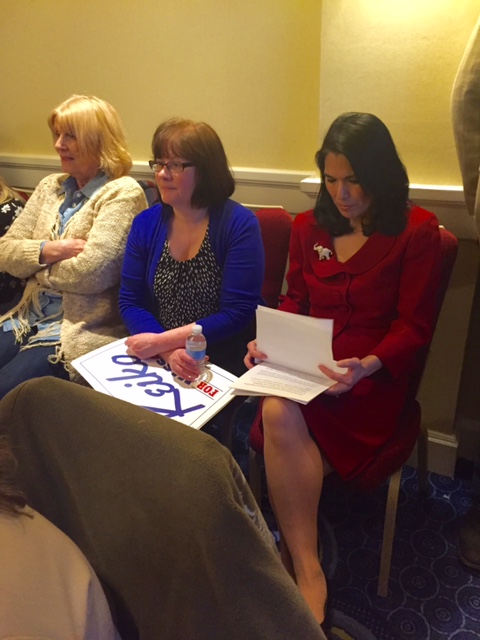 ^ hard at work : Keiko Orrall prepares her speech to the GOP state committee at last night’s meeting, where she was elected National CommitteeWoman

At the organization meeting last night, of Massachusetts’s Republican State Committee, Governor Baker’s candidate for National CommitteeWoman, State Representative Keiko Orrall, was elected by a vote of 41 to 37. The vote was close, as expected. In his campaign to secure a majority of the State Committee’s 80 members, Baker and his campaign team enjoyed only modest success. Yet modest proved enough to win last night’s big test.

First, Orrall is an elected State Representative; Prunier is a paid consultant to one or more advocacy groups which oppose marriage equality, LGBT civil rights, and, in some cases, women’s rights to control their won reproductive decisions (often described as “pro life”). Orrall, as a legislator, represents all the voters in her District; Prunier represents only her advocacy group. Should a political party be responsible to all the voters, or to an interest group ? For me, the decision is clear : a political party owes a duty to all the voters.

Second, the National CommitteeWoman sits on the GOP’s national committee and helps direct a national GOP agenda. Having an inclusive realist on the national committee rather than an interest group consultant benefits the party’s appeal beyond its base.

Thirdly, the change from Prunier to Orrall assures voters in Massachusetts that the Republican party seeking their votes values all voters equally, and their views on all the issues. You would think that would not need saying: but in the Prunier world, it was a principle overridden.  That Prunier’s advocacy also happens to be rejected by the overwhelming majority of Massachusetts voters adds injury to insult.

The Prunier approach elects a small minority of our 200 legislators at the expense of surrendering all the rest. It’s a politics of assured defeat.

During the 10 years of Prunier’s political ascendancy, she certainly played a major role in raising the number of GOP legislators from teens to the current 34. But at the same time, she pitted members of her advocacy groups against other GOP hopefuls, in primary fights that guaranteed defeat for all. Hers was NOT a policy of party building.

Keiko Orrall was one of the people whom Prunier recruited for candidacy; and at the time, the then inexperienced Orrall thanked Prunier for her help. That thanks became an issue in the National CommitteeWoman contest. Orrall was accused of disloyalty to the woman who had helped her to win a House seat. But I think that, over the years since, Orrall saw that Prunier’s “help” came at a huge price to the overall party prospect.

The party platform that Prunier and her state committee allies enacted in 2014 musdt have been the last straw to political realists like Orrall. It embraced all of Prunier’s advocacy group agenda, seriously embarrassing the Baker for Governor campaign. Gay voters, and supporters of women’s reproductive rights, major components of the Republican Party’s Governor campaigns since Bill Weld’s 1990 run, turned away; some came back as Baker made very clear his support for women’s reproductive rights and marriage equality; but others did not come back. On election day, Baker did win, but by less than two percent of the vote.

Baker and his running mate Karyn Polito obviously resolved that this situation could not continue; thus the long campaign to gain a majority of state committee members and to win the contest that was finally won last night. Significant public policy consequences ensue. Baker can move forward on all fronts without having to worry that he will face dogged opposition within his own party structure. He now has the kind of control of his own power base that Speaker DeLeo holds in the House.

His hand to negotiate an agenda is much stronger today than it was a few months ago.To all who want the Baker reforms to continue and to succeed, it is hugely important that Baker now holds a stronger hand to deal.

Finally, there’s a lesson in all of this that Masachusetts Republicans dare not overlook. Prunier and the advocacy groups who pay her were able to take over a party small in number, even empty of numbers in many places, and to exploit its smallness to their advantage. They were able to gain control of the party’s very structure and, mostly, to make the party an interest group : their interest group. That it has taken a sitting Governor with 70 percent-plus favorable ratings to defeat — narrowly — this takeover shows just how successful the Prunier venture has been.

There is one note of caution in last night’s Baker win:  it reasserts the primacy of the Governor in a party that has been oriented to winning only that office since 1990, and very successful at it. It is far from clear how the Baker, Polito, and Keiko Orrall party leadership can expand the party’s registered numbers beyond the current 11 percent or increase the party’s legislative numbers past the present one in five. Party enrollment is mostly determined by the big, national picture : and in Massachusetts, only Donald Trump, toxic to almost everyone, has shown ability to bring non Republican voters into the party.

There is also the paradox that, were Republican numbers to increase significantly, Democrats would become less willing to support Republican candidates for Governor. Right now, many Democrats are glad to become part of Baker’s team, because they, too, aren’t altogether happy with unchecked legislative power. Most legislators are chosen in party primaries with maybe 15 percent of all voters voting. In that small a turnout, vested interests can — and do — control the outcome, preventing needed reforms. We see this right now in the charter school cap lift fight, where teachers’ unions and their allies prevent charter cap expansion — overwhelmingly favored by the voters — because they can dictate to legislators elected in small voter turnouts. Thus many Democrats support Republican candidates for Governor, as a “whoa !” against control of the legislature by vested interests these Democrats dislike but cannot defeat in primaries.

These Democratic activists know that a Republican Governor whose support vote comes 75 to 85 percent from non-Republicans is answerable first to them, and that he knows it. Electing him has, in their minds, the right policy significance but is no threat to overall Democratic dominance of our state. If the new GOP state leadership succeeds at enrollment expansion, the election of Republican Governors could become more difficult, not less.