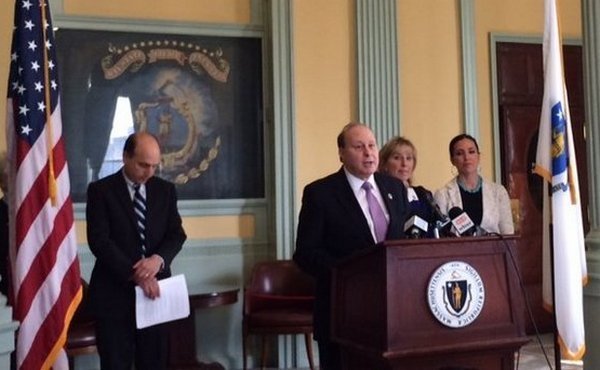 ^ nice try, but no thanks : Senators Rosenberg, Spilka, and Chang-Diaz propose a charter schools “compromise” that makes things worse for them, not better

The State Senate is proposing a Charter Schools bill that it calls a “compromise.” What say ? If I read it correctly, it makes the present inadequate charter schools situation worse, not better. Here’s the bill as it reads today. You make up your own mind whether I’m right or not : https://malegislature.gov/Bills/189/Senate/S2203

The Senate ways and Means proposal is titled “An Act enhancing reform, innovation and success in education.” Nice phrase, typical lavender word-wash. As I read the bill, its primary purpose is to commit the State to allocating $ 1.4 billion of state aid, every year, to each of our state’s numerous public schools districts. In exchange for said money kiss, the bill will authorize additional charter schools without a number limit, but only on condition that all charter schools agree to ( a ) add teachers and parents to their executive board and ( b ) suspend students at a rate no greater than the suspension rate in such school district as the charter school at issue is located.

Condition ( a ) sounds reasonable; but adding teachers and parents to a charter school board is likely to render its decisions more cautious than now, which is the opposite of what school reform needs. Condition ( b ) is simply a deal breaker. It is no business of the state, or anyone, how a charter school decides upon student discipline.

If Condition ( b ) were not already impossible to agree to, the $ 1.4 billion commitment would do the trick. How can the state commit funds it may not have ? Or is the Senate anticipating passage of the so-called “millionaire’s tax” referendum that will be voted at the November election ? That referendum calls for earmarking the anticipated tax revenue to school funding. It is sneaky of the Senate to try to lock into place revenues the voters have yet to agree to, in hopes that voters, knowing that the :ear marked” funds — which never do get earmarked — will in fact be committed to, thereby juicing the “yes” vote on this short-sighted tax grab.

Boston’s Schools Budget — the subject of much parent and student rancor — is rife with inefficiencies, under-utilizations, and work rule anomalies that put a high price tag on absurdity. It requires not compensation, but drastic cost reforms. Mayor Walsh and his Education Chief, Rahn Dorsey are working out a ten year plan that will eliminate much of that waste. Why should the state now give Walsh an “aid” bath in which to sing money lullabies to waste ?

A major reason why we see steps backward such as this one, rather than forward, is because most members of the legislature are elected in party primaries with maybe 15 percent of all voters voting. Vested interests almost always control such small turnout elections, assuring that major reforms cannot get done unless there’s a huge public outcry as happened to the MBTA.

What the State should do — would do, if legislators had to face all the voters, not just 15 percent — in the matter of schools reform is to authorize Fiscal Control Boards, similar to the board now overseeing and managing the MBTA’s budget, so that waste and absurdity can be shaved down. Is there any doubt that nothing less than a fully empowered FCB is going to do the trick, given the resistance by vested schools interests to getting their dollars straight ?

But not in the current proposal, please. I say this to Senators Rosenberg and Spilka : go back to square one, meet with Governor Baker, and give us charter schools  reform, not charter schools vitiated.