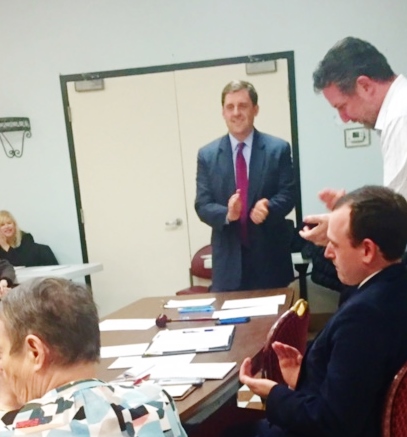 An apo0logy is perhaps in order for my writing again, so soon, about our District’s State Senate election. I’m writing now because the contest is rapidly taking on final shape, one in which all the misgivings I have had about this race have come to pass.

Last night the ward 3 Democratic Committee held its endorsement caucus. None of the five candidates who spoke won the required two-thirds. Joe Boncore received 8 votes, Dan Rizzo 5, Jay Livingstone and Diana Hwang four each and Lydia Edwards 1 vote. All five spoke at length and answered questions.  To the extent that answers to those questions told me what the candidates are thinking, I was disappointed by all except Jay Livingstone. He, at least, spoke a cool competence about legislation actually in process on Beacon Hill and about what he and the House have been able already to do. That said, I am not sure that Livingstone has convinced anywhere near enough voters in the key portions of our District — East Boston, Winthrop, Revere — to gain the prize on April 12th.

The candidates who do look as if they have victory in their grasp — Joe Boncore and Dan Rizzo — both missed the mark last night and have frustrated me before that when it comes to major issues : schools funding, charter cap lift, taxes. Rizzo supports charter capo lift; b ut at the ward 3 meeting, he gave a weak and sometimes incorrect defense thereof. He used the figure 37,000 children waiting for a charter school,when the actual, corrected figure is 34,000; and while he spoke the charter cap lift side’s talking point — that it’s unfair to kids to have to wait for an excellent education — he avoided talk about the egregiously inefficient, often misdirected Boston Public Schools Budget. as Rizzo has proven to me that he knows his issues cold, it was disappointing to hear him speak so vaguely and with such little authority about the major issue on which he stands apart from the candidate herd. Rizzo has also had a hard time figuring out where to stand on “just cause” eviction — an indefensible housing policy that will require a senate vote on any Boston home rule petition that might actually get that far. I am not impressed.

Boncore does not want to be described as advocating higher taxes to pay for the Boston Schools Budget’s supposed shortfall; but if, at ward 3, he did not actually advocate, he sure did express support for applying to schools any revenue that will be arise via the “millionaire’s tax” initiative on this November’s ballot, assuming it passes. It distresses me to hear Boncore speak, time an d again, of the Boston Public Schools Budget, as if it actually is in shortfall. It is not. The $ 50 million that Superintendent Chang says is short is short because of several inefficiencies and anomalies in the budget that he, or the Mayor, or both of them together, could correct, if they had the guts to do so. In particular, $ 863.7 million of the Budget’s $ 1.03 billion goes to salaries alone, and the “cuts’ in Chang’s FY 2017 budget go almost entirely to school programs, only a pittance to salaries. Those salaries include about $ 13 million for teachers who aren’t teaching, at all, because no school principal will have them. In addition, many school facilities are badly under-utilized; but Chang is unwilling to consolidate them because vested interests might storm up an outcry that he seems unready to respond to.

Boncore either does not know of these difficulties, or avoids them because he is the endorsed candidate of the very body most unwilling to reform the Schools Budget : the Boston Teachers Union.

Boncore’s candidacy does have much to recommend it. He has an army of support, has worked doggedly to win more, and on issues other than the schools budget, he adopts the sensible position (he opposes “just cause” eviction, for example). But his willingness to accept higher taxes to support a budget that needs to spend less, not more, is irresponsible and one that, well, disappoints.

As for Diana Hwang, who has charisma to spare and a great life story, her candidacy has plenty of support — but from outside the District. Many power people support her (including a City Councillor and a State Senator)  but no big names from within our actual District. And her campaign’s relevance to actual people, in East Boston anyway, seems well summed up by my friend who today posted these words on his facebook page :

“I saw lots of beautiful Diana Hwang signs on the streets. (The women didn’t know anything about her, regardless.) Her campaign *looked* great. But I checked my phone and saw that, despite her great life story, her head is full of purely liberal and uninteresting ideas: support unions in *all* situations, higher taxes on the rich, more money for public schools, no support for charters, lots more government programs, expand MBTA service regardless of cost, blah, blah, blah.

What a shame! She seems like one hell of a great young woman. Too bad she can’t think outside the progressive box to help the awesome people I met at the park.”

This is where the seven-candidate, party primary platform assures such frustration. Hardly anyone beyond the District’s political community knows much about the seven candidates, or cares, and why should we ? Our interests aren’t being attended to, only the interests of the vested groups that can dictate to an election in which maybe 15 percent of the voters will vote and which will be won by whichever candidate can gain just four (4) percent of all voters. The seven-candidate, party format almost assures that our next State senator won’t represent many of us and will barely figure out the huge appeal, in our District too, of Governor Baker AND of the reforms he is fighting for, few of which any of the seven candidates seems ready to talk about, much less support.

Perhaps it will be Dan  Rizzo, who does at least support one major Baker initiative. I only wish he could argue for charter cap lift with more oomph and mastery of the reasons why, and of the out of whack Boston Schools Budget, which could use — badly needs — its own version of the MBTA’s disciplined Fiscal Control Board.