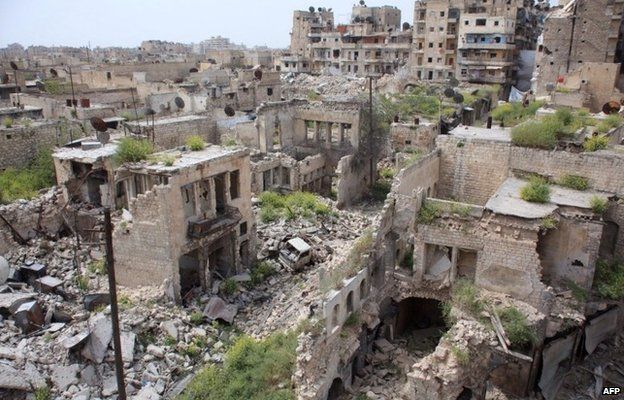 ^ This is what Aleppo, Syria’s once most vibrant city, looks like today. Utilities destroyed too. Fought over by four militias.

Some 5 million Syrians no longer live in Syria. That’s out of a population of about 30 million. Of those who remain, at least 2 million Kurds now live in “Rojava,” as they call their northern-border enclave. Another 7 million remain in Syria but displaced from where they once lived.

This, of a pre-war population of about 22 million. You can see a map of these displacements, and read the sad story, at this link :
http://www.economist.com/blogs/graphicdetail/2015/09/daily-chart-18

Another 300,000 Syrians — according to reports — have been killed; hundreds of thousands more have been tortured and now live maimed, mutilated in body and traumatized beyond anything most of us will ever know. How bad is it ? The tortured who have surviv3ed describe themselves as “lucky.” The tally of dead rises every hour.
For the rest — about 11 million — there is little hope and no security, not even for the elite who guard Bashar Assad and are guarded, more or less, by him. In Damascus and on the Latakia coast of Syria actual war may not be present, but the effects pervade. Every home, of every faction, has a son or a cousin serving in the Assad army or a militia; every home has suffered a casualty. Many families still living inside Syria count family members among the refugees — people from whom they never hear or fear of consequences : the Assad forces choke everyone, even their own.

The country’s economy, once one of the Middle East’s strongest, now lies shattered or belongs to militias or Iran via its support for the Assad forces. Syria’s oil reserves move via the lack market if they move at all. Tourism once sparked Syria’s businesses. today there is none, and much of the nation’s ancient cultural heritage has been destroyed or looted.

The Syrian civil war has visited upon the nation its worst disaster at least since very ancient times. Alexander’s armies fought battles on Syria’s coast and in its northeast, but except cor the destruction of Tyre, those battles barely scraped the population. Roman Syria was a prosperous place, the corner in which the Jesus Movement grew to become Christianity (and the Syrian Christian church, numbering about 4 million souls, is still the oldest congregation in the world, tracing its origins all the way back to Paul and Peter.) The Muslim wave that changed Syria from Christian to Islamic during the late 600’s brought prosperity, not ruin; and the Crusades barely touched the nation, which remained a major world trading force right down to modern times.

Yet the coming of Islam brought theocratic divisions that, unlike those within Christian congregations, did not heal. they worsened; and today Syria is broken in part because of the Islamic cleavages between Sunni, Shi’a, Alawite, Druze, and others. The shattering of peace has also forced ethnic templates to the surface : Kurds, Yezidis, Turkmen, and Arabs have all, for themselves, found cohesion in ethnicity as exclusion.

We in America tend to see “Syria” as uniform. It is no such thing. Few nations host so much diversity. For us, diversity is a boon; it enriches us. So it does. Diversity of peoples enriches a civilisation just as does diversity of opinions. For a diverse nation, however, its enhancement can become its poison when the nation — the unifying idea — shatters and falls. So it has befallen Syria.

I doubt that Syria as we knew it can ever resurrect. Just as the destruction of the Jewish Temple by Rome in 70 AD generated the diaspora of Jews that persists to this day — ad which has only been partially reversed by the forced establishment of Israel some 67 years ago — so the demolition of Syria is likely to magnify not shrink. Syrians now live elsewhere, in large numbers, and are adapting to different cultures and situations. Their diaspora is real, riveted on their minds and ours by stunning pictures of desperate escape. It is a national epic, but not one to stoke pride; only sadness.
There will surely be Syrian communities the whole world over; but even though many Syrians will remain within the old national territory, it is unlikely they will ever be Syrians again. they will be Kurds; they will be coastal Alawites; they will, in some places, be Christian towns defending Christian autonomy; and they will, certainly, be Sunni Arab. But Syrian, they will not be. The divisions run deeper than deep, unforgivable acts of horror cutting bone breaking crevices into millions of surviving souls and schooling their children in the horrific before all else.

Let us not dismiss the horror as all the fault of the “Daesh.” ISIS is definitely one of the world’s nastiest ever death cults; but the Assad regime and its military units have tortured, brutalized, kidnapped, and killed many times more Syrians than the Deash have done. Blood is on almost every Syrian hand.

The Syrian Civil war has been a disaster for everyone involved, except maybe for the Kurds, who have assured their national identity — long suppressed — and almost forged themselves a nation named Rojava running from the Iraq border near Hasakah to the Mediterranean coast at Afrin. . Yet even this, the one potential good to result from the war, is not assured. Not at all.
—- Mike Freedberg / Here and Sphere