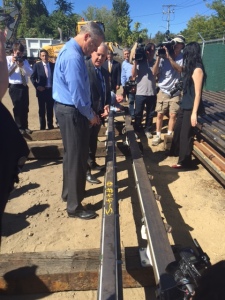 Initiative petitions should not be the first sign of how an upcoming election might break, but right now that’s how it looks here in Massachusetts.

On one side, there’s the initiative to raise the charter school cap. It will be on the November 2016 ballot. Governor Baker supports it strongly. On the other side is a petition to amend the Constitution and enact a two-tier state income tax. This initiative will need two votes (at least 50 in support, or it fails) by the legislature and cannot be on the ballot until 2018. Baker has not weighed in, but as his no new taxes stance remains fully in force, I expect that he will oppose this.

Early polls indicate risk for Baker. Support for raising the charter cap at best barely outnumbers opposition. As for the two-tier tax initiative, SEIU supporters tell me it polls very well. They would say that, but I’m willing right now to believe them, even though twice in the 1990s initiatives to enact a graduated state income tax failed two to one. Perhaps this time will be different because people’s income expectations have fallen back.

Connected to the two-tier tax initiative is a big push to have the legislature pass a $ 15.00 an hour minimum wage, to be phased in at three intervals. Will Baker support it ? He isn’t saying, nor should he yet say.

What interests me politically about these moves is the composition of their support.

Backing the charter school cap lift one finds Pioneer Institute conservatives, some of them for anti-teacher union reasons or in opposition to common core curricula; many of Massachusetts’s communities of color, who have had enough of underperforming schools and few options otherwise; a substantial number of the state’s employers, who need entry level workers every year with sufficient skills to do the job; innovation school projects snd skills bridge groups; and — of course — the charter school movement itself, including its advocacy support.

By itself, this support should score a substantial victory boosting Baker’s re-election two years later. But tgst assumes that supporters of the initiative will also support Baker; whereas many, especially from communities of color, are core Democrats. In 2014, Baker won barely 9 percent of Boston’s Black voters and only about 18 percent of Hispanic voters. His all in support for the charter cap lift — which is almost universally supported by voters of color — should win him many; but  core Democrats will be pulled toward the Democratic nominee by their party activist neighbors, who include almost all the state’s of-color elected officials. Will the many, many activists of color who rallied at the State House this week in support of charter cap lift rally for Baker in 2018 despite big pressure from such as Councillors Ayanna Presley and Tito jackson, three or four State Representatives, and two state Senators ? I see this question as a daunting challenge.

Support from Baker’s of-color charter school ralliers faces added pressures, because voters of color almost all support the $ 15.00 an hour wage boost. I know of not one elected official of color in Boston who opposes the big wage hike. Baker would surely solidify his “Yes !” from inner city charter school activists if he supports the $ 15.00 an hour hike or at least does not oppose it; yet Baker is also very much the candidate of the state’s business establishment, which isn’t keen on this wage hike.

He does have other cards to play. He has brought to his side leaders of the State’s shrewdest unions, Local 26 Hotel Workers and the Building Trades. Their first priority is to keep the building boom going — and to see the MBTA and commuter rail operate within budget and on time all the time, because Building Boom workers use it to get to their job sites and customers and tourists use it to get to hotels and downtown buildings. In 2014 almost every union opposed Baker actively. i suspect that in 2018 many will stay neutral, maybe even support him. As for the initiatives, most of Boston’s unions support both the charter cap lit and the $ 15.00 minimum wage.

Baker has one other, huge card to play : his solid partnership with House Speaker DeLeo. As the Globe’s Scot Lehigh shrewdly observed, DeLeo is happy to be Baker’s reformist ally. History makes clear that the Speaker almost always gets what he wants; he can therefore deliver to Baker victory on Baker’s key agendas. Yet DeLeo is also a Democrat and so cannot ignore the support many of his 123 or so Democratic members want him to provide to the wage hike, especially — and to yet another bill now in process : adding public accommodations protections for transgender people to the current transgender civil rights law. The last thing that Baker and DeLeo need is a split on this issue, which should not be an issue at all. Hopefully the two men will get this bill enacted quickly and then move on with an alliance crucial to Baker’s re-election.

The State Senate is another matter altogether. as i have editorialized often, it is now the institutional base for the agendas being pushed by SEIU and what some call “the Elizabeth Warren wing of the State’s Democratic party. From the Senate comes a constant pepper of criticism of stances taken by Baker and DeLeo and their bsuiness, big labor, and innovation-economy allies.

Of course all of this shifting and shoving won’t matter much if Baker’s 2018 opponent turns out to not loom large. (A 70 percent afvoarble poll gives much reason to pause.) But the charter school cap and minimum wage hike fights promise to be divisive, passionate, energetic. Which means that Baker will have to lead by passionate, energetic example — because when you’ve picked a side in such a battle you can’t be so-so about it. Your support finds other things to do if you look like you’re hearing time outs.

In any case, the honeymoon phase of Baker’s term will soon give way to the battle act. These are fights that Baker must win if he’s to be the successful Governor his campaign promised that he would be.