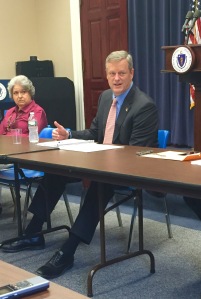 ^ Governor Baker at presser expressing confidence that he will get Green Line extension completed.

Today at 1.30 PM Governor baker will pay a visit to the MBTA’s Staging facility in Dorchester, there to review and discuss ongoing winter resiliency efforts.

At a presser in the State House on Monday, he spent many minutes detailing what the T has already achieved, and why it made the improvements thus chosen. Doubtless today’s visit will highlight those upgrades in hopes of convincing the riding (and taxpaying) public that the T is restoring itself to some sort of dependable health.

These upgrades seem the easy part of Baker’s “Fix the T” mission. Because, like some kind of endless ridge up a Himalayan mountain, the Massachusetts public transportation climb gets longer and longer. Is there no end to the fixes needed, the cost of fixing, the bad news uncovered at every close look the Fiscal Management Control Board takes ?

Yesterday the FMCB issued a 50-PAGE report which you can – should — read here (in pdf format) : http://www.mbta.com/uploadedfiles/About_the_T/Board_Meetings/FMCB60dayReportReport1BaselineAnalysisandProgresstoDate.pdf

 The MBTA’s operating budget (including debt service) is unsustainable, with expenses increasing at nearly
three times the rate of revenue growth. Left unaddressed, the structural operating deficit of the MBTA will reach $427 million in FY2020.
 Annual capital spending on deferred maintenance and capital investment – the “state of good repair” backlog –has historically fallen substantially below the $472 million annual spending needed to prevent the SGR backlog from growing greater. That backlog has risen to $7.3 billion, reflecting both this prolonged underspending as well improvements in the SGR data base. The SGR backlog does not, however, account for inflation. Other non-SGR needs, including safety and security,better accessibility, and improved capacity and modernization, add further pressure to the capital budget.

The report then itemizes steps that the FMCB has taken to improve MBTA service.

 The FMCB and MBTA management are increasingly utilizing performance metrics to improve MBTA operational
practices and to expand transparency and accountability for the riding public.
 Capital spending increased to $740 million in FY2015 and is budgeted at $1.05 billion for FY2016. MBTA management and the FMCB are closely monitoring capital spending to ensure that all available funds are spent and that the MBTA remains on course to reduce the SGR backlog.
 The MBTA’s Winter Resiliency Plan has prepared the system to better withstand major storms and extended periods of cold.
 The MBTA and Keolis Commuter Services have signed a Performance Improvement Plan to address identified shortfalls in commuter rail performance. On-time performance for the commuter rail system has improved since April.
 The FMCB and MBTA management are developing a strategy to improve MBTA contracting processes and to review all
existing service contracts. Utilizing the contracting flexibility provided by the Legislature, the MBTA has issued a Request for Information for the private sector to provide service on some low- and moderate-ridership bus routes, some express bus routes, and late-night bus service.
 The FMCB and MBTA leadership are pursuing efforts to increase workforce productivity and to reduce absenteeism among MBTA staff, the leading cause of dropped trips on buses and the subway. The FMCB is committed to a positive employee engagement program, understanding that morale,a shared sense of mission, and workforce investments are essential ingredients of any successful organization.

Every page of the 50 page report teems with performance goals, tasks itemized, timelines for accomplishing. The report warns that the MBTA budget is not under control and isn’t likely to reach stability until FY 2020 at the earliest. Page 8 of the report makes clear that the FMCB will request the State’s FY 2017 budget to appropriate much more funding of T operations than  the system received in FY 2015 and FY 2016. This should not surprise. I said as much in a prior article some months ago. There’s far too much deferred upgrading as it is; either the T finishes these upgrades now, or it will continued to not have the public’s confidence, which means that rider fares will fall short of where they need be.

I’m impressed with the clarity of the report. Impressed too with the steps itemized. This is what all of us expected of baker as expert manager. The legislature was not wrong to enact Baker the enabling laws that he requested.

Unfortunately, the FMCB’s MBTA report does not embrace the entirety of the State’s Transportation challenges. It touches only tangentially on Green Line extension — a project that Baker said, at Monday’s presser, that he supports and wants to accomplish, as soon as, and if, the project’s cost can be stabilized at something less than the billion-dollar overrun  recently forecast.

Assuming that Baker can find a way to complete Green Line extension to Medford without busting the transportation budget — he thinks he can do this — we come next to a list st.ill long of projects awaiting or in discussion : installing positive train control, at a cost of about $ 490 million; putting in place new trail technology and cars on the Fairmount commuter rail line, at a cost of about $ 350 million; and deciding whether to build a North Station to South Station rail connector, and with what components. For this last project, which will cost at least $ 2 billion and maybe as much as $ 8 billion, there is no telling yet what it will entail and certainly there’s no likelihood of it being included in a FY budget before 2021.

We also cannot tell whence the FY 2017 and FY 2018 transportation allotments will arrive. Will there be added revenue from a gas tax increase ? Will the SEIU’s two-ti8er tax initiative, which requires amending our Constitution, be approved ? And, if so, will the additional revenue anticipated actually arrive and, if it arrives, will it be earmarked to transportation, as the SEIU wants ? Good luck with that. My guess is that if the FMCB requests a budget sum, it will be granted them, from available revenue, because fixing the T is a priority for everybody. And this will be true right through FY 2019, no matter what becomes of the SEIU tax initiative.

That leaves three major State needs in second place : bridge and road repair, especially in regions beyond the T and commuter rail heads; the South Coast rail project, which remains trapped in competing environmental impact reviews; and early childhood education, which many people want but which so far has received funding on a case by case basis only.

I look at the transportation needs listed in the prior paragraph and wonder exactly how they will fare if the North – South rail connector makes its way into an FY 2021 budget. Did I mention that the connector, as envisioned by its supporters, conflicts with the Governor’s plan for South Station expansion, a $ 1.6 billion plan that Mayor Walsh very much wants as well ?

Clearly there’ll be no end to the steeply necessary public transportation ridges that Baker will be climbing all the way to his re-election campaign and, if he’s re-elected, well into his second term too. I think he can climb them all, it’s why we elected him; but the sheer scale of Transportation Mountain makes clear just how much climbing our previous State leadership teams chose to avoid. They failed us.