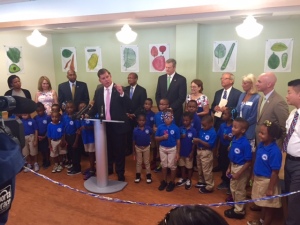 ^ education, skills training, school choice, “rise up” : a VERY big idea, and Baker has it and is working it

A few days ago the Boston Globe published an article in which the writer asserted that while Baker may be a great “Mr Fix It,” he has to start showing a “big idea.” Because Governors are supposed to have big ideas.

The writer implies that Baker hasn’t got a “big idea” ; that he is so tied to the caution which is his obvious first principle that he is skeptical of big ideas, loath to advance one. I disagree with this assessment. I think baker has hold of a very big idea indeed and is advancing it every step of the way. That idea can be expressed in two words : “rise up.”

“Rise up” is no stranger phrase. Those seeking a $ 15 an hour minimum wage use it, albeit amended as “raise up.” Jeb Bush, in his current Presidential campaign, uses the theme “Right to rise.” All have the same goal : getting those who lack up to a place where they can manage and even abound. Yet there’s a difference. Supporters of “raise up” advance a worthy but single object. Jeb Bush means well, but his device for rising seems detached from the actual steps needed. Baker, on the other hand, sees the idea comprehensively and is in office to do something about it.

So : what then is Baker working on in pursuit of “rise up” ? Quite a lot.

Baker has focused his program on the people who need it most and who have the least clout : those with low incomes, or who lack job skills, or who live in dysfunction or are homeless; and on communities of color. He supports all manner of self-help and non-profit organizations which provide education, skills training, personal confidence training, recovery from addiction and/or isolation. Almost daily you’ll find him at gatherings of such groups — and did I forget to mention sports groups ? baker is there for them, too, and for the same purpose. Baker’s attendance enhances their visibility and clout. There’s also State grant money, which Baker designates on a well purposed case by case basis.

Baker is often accompanied to these meetings by Labor Secretary Ron Walker and Business Development Secretary Jay Ash. the message is clear : Baker supports self help, sports,m and non profit skills training groups because they help their mostly low-income and/or people of color participants to gain education, find jobs, and perhaps go into business.

I was puzzled when Baker appointed Ron Walker, a banker, rat.her than a unionist, to be labor Secretary. Now it’s clear why. He wants a Labor Secretary to oversee new jobs that don’t yet exist, not old jobs that soon will not exist.

Toward the “rise up” goal, Baker will soon up the ante : he will file legislation to increase the number of allowed charter schools. There’ll be nothing cautious about this move. Teachers’ unions and allied parent groups doggedly oppose even the current charter schools, much less an increased number. For Baker, however, expanding access to charters — and hopefully to all kinds of innovative school set-ups — expansion of innovation education is crucial to giving parents of ‘”rise up” kids more options for assuring their children an education that can get them to the jobs that Ron Walker monitors.

Baker’s move also portends major changes in the traditional public school. If baker’s charter school expansion succeeds, traditional schools will have little choice — at least in the big cities — but to individualize, so that each “traditional” school adopts an innovation curriculum unique to itself. This transformation will have other major consequences. Kids will now all have to travel to the school of their innovation choice; there’ll be a lot less “neighborhood’ schoolhouses. And this, too, will enact changes, big social changes, as kids from all parts of the city become friends with kids from all over, not chiefly from only their six or seven abutting blocks. The result can only be revolutionary.

This is a very big idea. It’s a risky idea. Breaking up the one-size-fits-all public school, an institution put in place almost 175 years ago,. is no small thing. Breaking up any vested bureaucracy is never minor. But Baker sees very clearly that the state’s economy has transformed and will continue to transform; and that education must transform with it, because one of education’s two main purposes is to prepared graduates for the actual job market. (The other purpose of education is to prepare kids for citizenship : social life in public.)

Baker knows that right now, it’s often non-profits that get low-income and/or people of color school ready for employment. At YearUP’s opening ceremony last week in their new offices, the group’s CEO touted that State Street Bank alone had taken in 500o graduates of the program during its 15 years of existence; and that this year the bank will take in 125. That’s an awful lot of kids who needed more than the graduation they received in Boston’s public schools and which they could not get from a charter school because the allowed number of charters offer barely one-sixth of seat applicants a seat.

Transforming the procedures and pathways for low-income and/or kids of color to ‘rise up” is a huge idea. And Baker has it and is working it. He’s a lot more than just Mr Fix It.