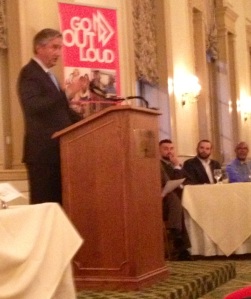 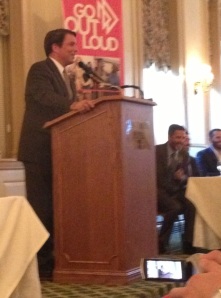 Who could have predicted, twenty years ago, that a time would come when candidates running for Congress would all appear — and be glad of it — at an issues Forum hosted by gay activists ? So it was, last night, that at the Hawthorne Hotel’s main ballroom in Salem, all five candidates seeking to represent the 6th Massachusetts District spoke their speeches and answered questions posed by Go Out Loud’s Chris Sicuranza.

Present at the table were all four Democratic primary candidates : (1) Marisa deFranco, a feisty, street-talking attorney who has gained a large reputation as an immigration lawyer and also represents many LGBT clients (2) John Devine, whom I had never met or heard of until last night and who spoke much too quietly to be heard (3) Seth Moulton, of Marblehead, the night’s most eloquent speaker by far but who, when faced with giving specific answers to Sicuranza’s questions, faded to gray; and (4) John Tierney, the nine-term Congressman, who needs no introduction and who had a bully-f0rce cheeri9\ng section on hand to applaud his succinct, authoritative remarks.

Equally present was the Republican challenger, Rich Tisei, whose 24 year career in the state legislature and Senate saw him, among other work, participating in our state’s pioneering legislation on gay and transgender rights.

Tisei had a huge advantage for a gay activist Forum: he is openly gay and married to a man who sat in the front row and of whom, as he told the full room of people, “I wouldn’t be where I am today without his love and support.”

Questions were asked of all five candidates, concerning specific gay rights legislation they would support, issues of housing and job discrimination, and the problem of homeless gay youth — homeless often because their families have rejected them. These questions were answered more or less effectively : the more effective answers came, not surprisingly, from Tierney and Tisei. Still, none of these questions had any effect on the central issue raised at the Forum by these two leading candidates :

Argued Tierney : “Yes this Congress did nothing. You want a Congress that does something ? change the majority. Don’t send Rich Tisei to Congress, because one man cannot change the GOP caucus.”

Tisei’s response : “Yes, send me to Congress because my being in the House GOP caucus changes it right there. Also my record of bipartisanship.”

Both arguments make sense. T^ierney is right : Congress will do nothing useful as long as the current GOP remains in the majority. Tisei is equally right ; putting an openly gay Congressman into the house GOP caucus DOES change the caucus irrevocably. (Note : Tisei won’t be as alone as Tierney thinks. openly gay Carl DeMaio, of San Diego, California, is sure to be elected. He leads the polls in his Congress district by ten points.)

So, which man’s argument do I choose ? It’s a terribly difficult choice. John Tierney has been an excellent Congressman, right on all the issues, tireless in attending our District,; and the troubles faced by his wife on account of her rather criminal brothers should not — must not — be held against him. On the other hand, changing the House GOP caucus seems to me a vital national mission. Our nation cannot rise to the occasion if it has one progressive political party and another that wants to regress. We need two progressive parties, differing on priorities and methods but not on the ultimate goal of a more just, inclusive, welcoming society.
Re-electing John Tierney will NOT change the majority. The GOP now controls the House by a majority of about 50. It is not likely to be ousted, now or in the forseeable future. Thus Tisei has the better practical argument : change the house GOP caucus. It’s also the more vital national mission. For the entire nation’s sake, the GOP must change — must change a lot. Only Republicans can change it.

The election of Richard Tisei is a strong start. I am glad that both he and Tierney framed the election in these terms.