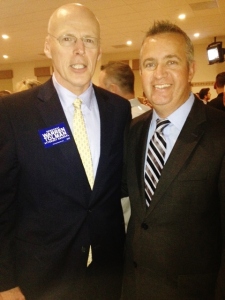 Voters have to choose, sometimes between the lesser of two evils but not always. once in a while voters get to choose between two candidates both superb. That’s difficult. it’s difficult for me. In politics I’m not used to such luxury, but in the current race to choose a new Massachusetts Att0rney General that’s what we’ve got.

Warren Tolman would have been a superior candidate for governor much less Attorney General. Watertown town meeting member, State Representative, State Senator; retired to private practice as an attorney of distinction. his brother Steven Tolman is a major, long time labor leader in our state. Tolman speaks impressively, has commanding presence, should easily be nominated and just as readily elected over the very honorable but politically nowhere, Republican nominee, John Miller of Winchester.

Except that Tolman has a rival of almost equal resume and who is a very eloquent speaker to boot. Maura Healey currently serves as Martha Coakley’s top Att0rney General assistant and claims insider status : she knows the office and has alrready worked — successfully, passionately — on the issues it confronts. At a recent met and greet at Canary Square in Jamaica Plain — hosted by District City councillor Matt O’Malley, Healey spoke forcefully on point, hitting the bullseye on every count, from civil rights to consumer protection to mortgage lender confrontations. She also looked terrific — and yes, that may seem like a sexist remark, but it still matters a lot where a female candidate is at issue. (and is there something wrong with looking one’s best ? I hope not.)

Tolman will NOT get the authoritative better of Healey. But neither will she get the better of him. When it comes to fund raising, both candidates show major clout. Each has raised more than four of the seven or eight) Governor candidates. Below is a tally of each’s fundraising since March 1, 2014 :

The money says that Healey is an underdog. So does her following : it’s weighted heavily to the Progressive side, representing about one-third — not more — of activist Democrats. Tolman, on the other hand, commands big support from labor — as you’d expect — and from legislators and establishment types.

Tolman hasn’t set priorities yet, and it’s unlikely he will concentrate on cutting edge legal strategies. Healey will surely oversee the state’s three casino projects rigorously ; she opposes casinos but acknowledges that our State is probably going to have them. Tolman’s labor supporters very much want the casinos for the jobs they will bring.

All this said, both candidates merit a strong thumbs up from this journalist, and they have it. It may be a cowardly decision on my part, but i am going to say it anyway : readers, pick either candidate. You won’t go wrong.