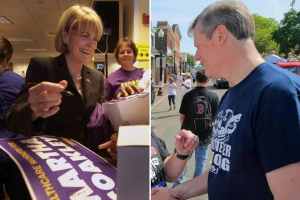 ^ closing the gap ; Martha Coakley now leads Charlie Baker by only 5 points, and the lean is in his direction

About three hours ago the Boston Globe published anew poll showing some significant movement in the relative positions of the leading candidates for Governor. Specifically, the poll showed these numbers

This is a link to the graphic detailing the numbers in this poll : http://www.bostonglobe.com/news/politics/2014/06/05/close-race-for-governor-ahead/lGwwKzkrTQlulHrEXdTgDO/igraphic.html

Now let us take a closer look at baker’s numbers against Grossman and Coakley and you will see that he is doing better even than these numbers indicate :

Baker is unknown by over 20 % of Massachusetts voters but draws 32 percent.
Coakley is unknown by only 5 % (or less) and draws 37 %. What this comparison actually tells us that Baker is ahead even of Coakley though he polls behind by 5 points. Baker gets his 32 percent from 80% — a “win rate” of 40 %. Coakley gets her 37 % from 95 % of voters : a “win rate of 38 %. assuming that Baker continues to win 40 % of the 20 % who don’t know him, and Coakley wins only 38 % of these voters, the November result would be something like Coakley 44.5 %, Baker 40 %, leaving the decision up to a still large number of undecideds (the two independent candidates draw 9 % and 2 % respectively, but as election day nears their vote will decrease).

Against Steve Grossman, Baker gets, as I said, his same 32 percent from 80 % of the voters; Steve Grossman gets his 26 % from the 60 % of voters who know his name. Grossman’s “win rate” is much higher than Coakley’s. He is getting 42 % among the 60 % of voters who know him. This gives him a November target of 43 %, a margin of three points over Baker’s November potential.

Both Baker results now point to a very close race; and the momentum at present is strongly running in baker’s direction. He is making a strong impression, and — surprise — capturing the interest, and tweaking the imagination, of city voters. Given that about 16 % of Massachusetts voters remain undecided (or supporting one of the side candidates), Baker has strong potential to close the gap with both Grossman and Coakley. A nine to seven break in his favor makes it a one point race versus Grossman and a two pointer versus Coakley.

At that point., all bets are off. Baker can win this thing. Right now I think he will. But yes, there is a long way to go and much can change.