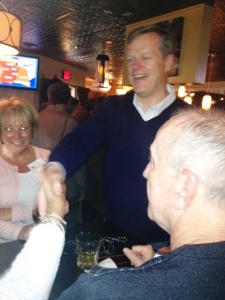 It doesn’t show in the polls, but Charlie Baker’s argument for why he should be the governor is a very strong one. He made that quite clear when he spoke last night to 200 people gathered at a fundraiser in his home town of Swampscott.

He spoke about great schools : “a school in which the principal has autonomy to direct the school is a great school. I saw just such a school in New Bedford. A standard school but with an excellent principal. It’s a level one school — top 20 percent performing. Why can’t we do this everywhere ? We need to leverage the strengths that are already have.”

Giving managerial autonomy to school principals is the core reform that Boston “interim’ superintendent John McDonough has put in place. It’s a reform that almost everybody supports. Baker is the first governor candidate who I have heard address this issue.

He spoke about state owned land. “There’s so much unused state-owned land in boston. Why can’t we develop it ? There are three high cost barriers to development in Boston : permitting, labor, and the land. Mayor Walsh is fixing the permitting. Labor will always be expensive. But why must the state have to make a profit on the land ? Let’s sell it low cost and develop affordable housing. It helps the City’s tax rolls and brings life to land where there was none.”

He spoke about local aid. “We cheat the cities and towns when we withhold local aid. 500 million dollars has been cut. As governor I’ll make sure that all the local aid fund goes to communities, because that’s how you build great communities. And so far I’m the only governor candidate who has made this pledge.”

You will notice what Baker did not say. Nothing about too high taxes, nothing about small government, nothing but cities, city issues, city problems.

Baker also laid down this challenge : “Both Karyn (Polito, his running mate) and I have long experience of local and state government; she in the legislature, me in the executive; and both of us have long experience in private business. No one running can match us. No one brings to this job what we do !”

The Swampscott audience — all kinds and ages of people, too — loved Baker’s speech. 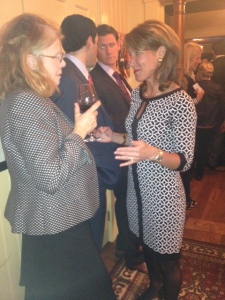 So what does Baker’s Swampscott pronouncement say about his chances of election ? It says a lot.

Right now he polls 30 to 32 percent of the vote; his chief potential November opponents poll an average of 37 and 49 per cent. These are daunting numbers; baker will be campaigning uphill all the way to election day. yet if he can stick to his current message, addressing city problems to city voters in a city way — and adding his quite forward ideas on technology transformation of state administration — he has a path to victory.

It may be his only path to victory. It is also exactly what the next governor needs to make his priority, his commitment, his work to accomplish. Because it is in the cities of our state that the future is being talked out, decided, and made.