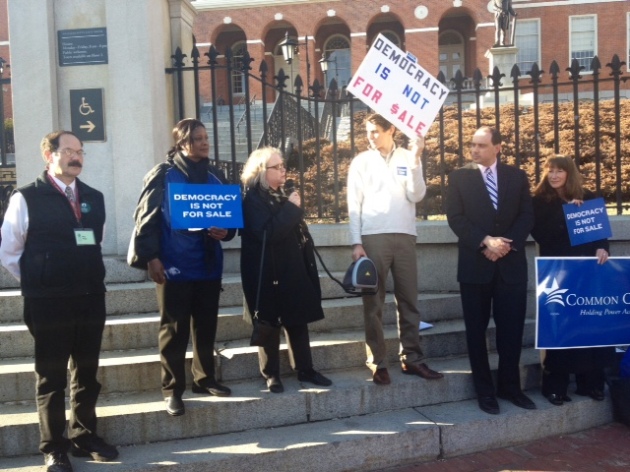 ^ protesting the purchase of our democracy : St Senator Jamie Eldridge and Common Cause chairperson Pam Wilmot (both on right) at the state House yesterday

Yesterday the Supreme Court, by its usual 5 to 4 vote, decided that “participation in the political process” means allowing the very rich to buy the process. We vigorously disagree,

Thus there is room to accord campaigns legal authority to raise enough money to get their speech printed or broadcast. And to grant the same authority to interest groups advocating an issue. The question is, what kind of authority can we grant ?
It seems obvious to us that the authority to raise money cannot be open-ended, because if it is, then those who have lots of money to donate can hugely overtalk those who don’t have a lot of money. And there can never be any reason whatsoever, in a democracy, to permit anyone legal authority to overtalk anyone else. All voices must be accorded equal access to print and broadcast.

To allow otherwise is to sanction oligarchy. this we can never do.

Five justices of the Supreme Court seem not to understand the difference between speech and purchase.

Overturning the McCutcheon decision — and Citizens United as well — by constitutional amendment won’t happen. If it could have been done — and so far it couldn’t — it is impossible now, for the plutocrats now have open season to buy a majority of Congress.

Pushing for an amendment is worthy, as a protest; more doable is to elect a democratic president in 2016, ensure eventually a different Supreme Court majority, and overrule two decisions which, if allowed to stand, will end American democracy as we know it.

Do I alarm you ? i intend to. we have already seen what a plutocratic, purchased Republican party is capable of doing to the economy and society as a minority party. Imagine what the country will be like if the purchased party takes the presidency. There will be oligarchy, or a revolution. Do you want to see either of these happen ? We don’t.