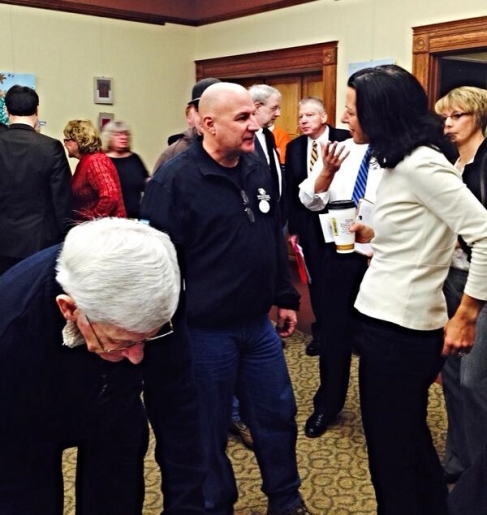 ^ the charm offensive has its limits : Juliette Kayyem meets caucus push back

Not even two days had passed after Democratic governor hopeful Steve Grossman accused rival Martha Coakley of being vague in her commitment to civil liberties than, this morning, I found my twitter feed filled with attacks upon a third Democratic contestant : Juliette Kayyem. One tweet said “Charming Kayyem favors ‘assassination as an instrument of intelligence and law enforcement.” Another, from the same twitter source, said “Charming Kayyem leading panel to legalize Torture ‘we were a room full of people who think it works’.” A third tweet from said source — “Bostonnish” — said : “If Kayyem hadn’t led effort to concoct legal cover for Bush -Era torture use, she wouldn’t be a charming accomplice to torture.”

“Bostonnish” sent me two more tweets of a similar nature. These were sent to me, evidently, as a response to my own tweet “if @Juliettekayyem had an agenda aspecific as her personal charm is masterful, she’d charm Spkr DeLeo — & win the election.” I am , of course, flattered to find that my tweets merit attack by an opponent of the candidate I happen to mention. Yet that’s not all there is to this story. Kayyem did work for the Deprtment of Homeland Security and has surely known that in the heat of this Governor battle she’d be challenged thereon. Big time : because the Homeland Security issue isn’t only about Kayyem. Edward Snowden’s revelations have made it clear that the war on terror has curtailed Americans’ privacy rights much, much more than we either knew or need to accept. The issue has also divided the Democratic Party. Had Snowden’s revelations been made of a Republican presidency, every Democrat would be ringing the tocsin. But no: the revelations were made of the Obama administration, and only on the very Left has there arisen any support for Snowden. Most Democrats find him a traitor.

This split matters for Kayyem especially, because the impact of her candidacy has been strongest among Democrats who consider themselves progressives — exactly the Democratic constituency among which the Snowden revelations have aroused the greatest anger. Now comes an attacker who connects Kayyem not to the Snowden revelations per se but to the Bush administration, no less, and to that part of the Bush government in which “enhanced interrogation” was defined, justified, and decked out in legal lipstick. Much of the Snowden revelations involved NSA measures begun in that Bush administration — though Obama expanded them. It would be hard to think of any political connection less appealing to Democratic progressives than to the Bush ’43 war on terror. For Kayyem, far more than for Coakley or Grossman — who so likely have no such connections — the attack made by “Botonnish” poses threat. And as I have 640 twitter followers right now, almost all of them political, “Bostonnish”‘s attacks will be seen by many.

Is there any truth to them, and, if so, how much truth ? I have read the two newspaper articles linked in the Bostonnish tweets. They do connect Kayyem to Homeland Security discussions on interrogation techniques — discussions in which she participated as part of a Harvard Law School professor’s symposium whose participants sought agreement on what interrogation techniques were permissible and to write their conclusions as a policy paper.

To the average voter, what I’ve just written may seem splitting hairs. Kayyem was involved in torture discussions, helped define “acceptable limits.” Nuff said. And to most voters, her participation therein as a policy advisor ruffles no consciences. unfortunately, the voters whose support Kayyem is seeking — and needs — may not take such a casual attitude of the matter. Though many Democratic progressives are the first to condemn Snowden as a traitor, and to accuse Bush’s Vice President, Dick Cheney — whose brief it was to secure policy approvals on interrogation techniques — of war crimes, other progressives dub Snowden a hero. There’s scant escape for Kayyem here. The Democrats who think Snowden a traitor hate Dick Cheney just as much as do the Democrats who think Snowden a hero; and Kayyem helped write policy papers for matters ultimately answerable to Cheney and Bush. The New York times article, from 2005, appended to one of my “Bostonniosh” tweets documents it.

What does Kayyem do about this ? If I were her advisors I’d tell her to discuss the matter thoroughly. She served the Obama administration as well as Bush’s — as did Bob Gates and others. She can say that she put “country first” — and if the man for whom that was a campaign theme — John McCain — is a case study in why our nation should oppose “torture lite” always, Kayyem did not make policy. She advised possible policy makers. And all of this happened many years ago.

Also on her case is a report, in the Globe, that Kayyem missed voting in two elections during the time she was living in Washington. There’s some disagreement as to whether she registered to vote there or not. She says she did; the DC elections board has no record of it.

Myself, I find this matter small potatoes. so what if she missed two elections or if she did or did not register to vote in Washington while living there ? She is running for Governor, not “super voter.’ yet the small potatoes does highlight the bigger potato of her consultancy participation in the “torture bureaucracy.”

It is not my job to make excuses for Kayyem or to devise responses for her to difficult challenges. She has opted to play big league ball, and cannot complain if an opposing pitcher plunks her with a curve ball. Her response, however, will matter a lot in how Democratic progressives, as sensitive as any activists to heavy handed war measures, take Kayyem’s interrogation policy years to heart. Who knows ? Maybe they’ll shrug it off. Charm does have its way even with issues obsessives, and charm Kayyem has more than plenty of. But the average voter probably won’t shrug so readily — if Kayyem gets her name onto the average voter’s Governior ballot. This flap doesn’t make that task any easier for her.