Born ,wrapped in a bag right out of the restroom garbage can, then carelessly discarded in the tank of a sports-bar bathroom — and left to die! That was the quick and atrocious beginning of life — right to the tragic death — for this Pennsylvania newborn boy. 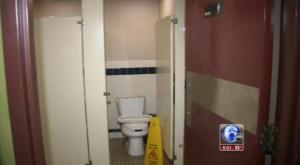 26-year-old Allentown Pennsylvania resident, Amanda Catherine Hein — went out with friends on August 18th to watch a pay-per-view wrestling match, at Starters Pub in Bethlehem Pennsylvania. While sitting with her party at a booth in the bar, she began experiencing severe back pain and excused herself. According to witnesses including her friend “Rivera” — she was gone for a lengthy period of time, possibly 40 minutes or longer — before returning, grabbing her purse and heading outside. Hein smoked a cigarette before returning to the group to finish watching the rest of the wrestling match. Say’s District Attorney: John Morganelli.  At some point “Rivera” noticing a fairly large amount of blood on the seat asked Hein “if she needed to go to the hospital?” — to which she replied ” I have no insurance”, at that point Hein was dropped off at home.

Starters Pub a sports bar on Route 378 in Bethlehem Pennsylvania — an estimated 30 miles from Philadelphia — is now the admitted crime scene of the baby boy’s disconcerting death.Bar owner Dave Rank was still in disbelief, and clearly still in shock as he explained that — A cleaning crew for the pub found the baby boy the following morning August 18th, in the tank of the woman’s bathroom toilet, after attempting to flush it repeatedly with no result — they lifted the tank’s top to find a hellish scene.

When D.A. Morganelli was asked his thoughts on what Hein was thinking he answered — ” I have no idea what goes on in her head”– noticeably unnerved, he said ” I have no clue.”‘

According to the Northampton County coroner, the newborn was at least 33 to 36 weeks gestational age — meaning he was fully viable, able to survive outside the womb . Court records also indicate that the baby was born alive and healthy.

After learning the gruesome details — Amanda’s stepmother Louiseanne Hein clearly heartbroken and appalled told reporters that she had no idea Amanda was even pregnant. She said that looking back a planned parenthood letter addressed to Amanda now makes sense. Through teary eyes and honest transparent expression — grief-stricken Louiseanne exclaimed through sobbing sentences: “We told her she always had a home here” and that ” we would have worked something out!”

Even neighbor Victor Rosario reinforced the theorized “Secret Pregnancy” by stating — “I didn’t even know she was pregnant, she didn’t look pregnant!”

On August 20th Amanda Hein was interviewed by authorities. She admitted giving birth to the baby boy in the bathroom, and disposing of him.  This gut wrenching confession, has earned Hein the rightful charge of Criminal Homicide. In Pennsylvania, “intentional murder of a child under the age of 12 is a Capital Offense — punishable by way of the death penalty. On Monday Hein was charged with one count of Criminal Homicide — thus the possibility of imposing the death penalty looms, if Hein is proven guilty.

Hein is being held without bail — as of last week no representation had been officially listed. The  authorities are still searching for the father of the baby.

This incident has resurfaced the topic of SAFE HAVEN’S — as New Jersey and Pennsylvania both have “Anonymous drop off laws.” The Safe Haven laws, and places are now pushing harder to educate people about the State’s laws regarding Safe Haven’s.

Established in 2002 after an infant girl they called “baby Mary” was discovered in a Sunbury Pennsylvania trash compactor.  EVERY hospital in P.A. are Safe Haven’s only needing to meet minimal criteria.

If those criteria are met — the newborn will be accepted and taken in — NO QUESTIONS ASKED — and completely anonymous if the person dropping off the child so chooses.

With help in place like Safe Haven’s and a multitude of other resources — there is NO NEED for the senseless and horrifying deaths of any healthy newborn. Educate yourselves, and those around you — IT MAY SAVE A BABY’S LIFE.