Federal Reserve chairman Ben Bernanke’s second term is done, and he is not willing to do a third. The President therefore has a big decision to make. Whom will he choose as successor ?

Our choice, of the three names mentioned, is Larry Summers. Here’s why he’s our pick.

Summers has held almost every economic position that matters. He is blunt, brilliant, thinks outside the box. He challenges ideas, including his own. He takes no crap from anybody — and this matters. What if in 2016 a Republican were to become President on a mission to implement the deflationary and regressive — deadly — economics voiced by the Tea Party ? Summers could and would almost certainly rebuff any such move. The “Fed” chairman has that level of power. We’re not sure that the other people being vetted have the gall to exercise it.

No Presidential personnel pick matters more than “FED” boss. One can argue that even Supreme Court justice appointments don’t matter as much. Supreme Court rulings can always be modified, even reversed. Economic decisions happen in real time; once taken, they set off consequences that cannot be un-consequence’d. The Federal Reserve Board directs the entire economy. Basic monetary policy — from interest rates to open-market bond purchases to the size of the money supply and its rate of increase. The “Fed’ decides and acts on all.

Not even Congress has the level of power over the American economy that the “Fed” has. Under Ben Bernanke, the “Fed” has invested trillions of dollars to purchase mortgage bonds and maintained radically low interest rates — the rate that it charges banks with access to “fed” dollars — without overworking the money supply. Indeed, the only reason that the Tea Party in Congress has not destroyed the credit rating of America’s debt, wiped out the welfare state, and caused enormous, uncompensated unemployment and home foreclosure is that the “Fed” has performed all the economic stimuli that Congress, paralyzed by the Tea, could not.
Under the leadership of Ben Bernanke, America has seen its economy grow and watched that growth pick up speed and width. Bernanke has saved America. Simple as that.

The next “Fed” boss will have just as much authority. It was accorded the “Fed” in a 1913 law enacted, in Woodrow Wilson’s historic first term, as response to the Panic of 1907, in which the American bank and currency system were rescued from complete collapse only because key private bankers intervened, just in time, and very much in their own interest. We cannot allow our economy to face such ruin, and we should not have to put the economy at the mercy of big banks and their self-interest. The American economy belongs to all of us, all the time, and as the “Fed’ has the power — and the ability — to mitigate such crises, we should be glad that we have it.

We should have — must have — a “Fed” boss who can command, who likes to command, and who fully utilizes all the powers that the “Fed” possesses. The US economy drives the entire world’s economies. Our dollar is the world’s top reserve currency. Every decision made by the “Fed’ affects our dollar and has world-wide implications. Nearly every such decision impacts the world’s interest rates, money supply, exchange values. Making the wrong decision here visits its mistake upon every nation; every nation’s response visits itself back upon us. The “Fed’ boss cannot be intimidated by this. Larry Summers does not intimidate easily. 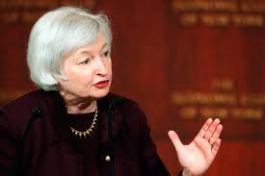 It is said that Janet Yellen, currently vice-chairman of the “Fed,” should be the choice because she is a woman — there has never been a female “Fed” boss — and because she works by consensus. These reasons do not move us. Money has no gender; economic decisions have no chromosomes. As for consensus, it muddles the matter — dulls the pencil. The “Fed” boss cannot seek consensus; his or her pencil must be sharp.

Larry Summers is, economically, the sharpest of pencils, and one who knows all the components of a point. He is our choice to lead the “Fed.”