Supporters of Mike Ross, John Connolly, Felix Arroyo, and Marty Walsh can sleep well tonight.  At the Forum held by the Main Streets coalition of 20 Coalition members, their candidates spoke well informed on every topic asked, indeed eloquently at times. Each seems to have his vision of the mayor’s mission well in place, and each saw the questions — mostly the concerns of small, neighborhood business, because that is what the Main Streets program is about — authoritatively in their particular mission’s terms. Dan Conley spoke effectively too, albeit in detail only — no grand themes did he embrace.

At a Forum, a candidate uses forensic skills. Speaking at a podium or into a microphone isn’t all that matters to a campaign — far from it — but voters do want to know that the candidates they are assessing can speak to the issues on voters’ minds and do so boldly, without resort to talking points. At the main Streets Coalition Forum, held in Upham’s Corner’s Strand Theater, the five candidates so far mentioned aced the test. If only the theater had been more full. It holds easily 1200 people, but most seats were empty. Let’s say that 300 were in the room, many of them supporters of local favorites John Barros, who lives nearby; Charlotte Golar-Richie, who lives almost as close by as Barros; and Felix Arroyo.

The evening had its highlights. Each of the effective speakers chalked up several.

On the question of what to do with the BRA, Marty Walsh and John Connolly answered well. Said Walsh : “Certain things are working, but much is lacking. Costs of construction don’t get figured properly. Main Streets organizations aren’t told where to apply to fill slots on their boards.” Connolly gave this answer : “going into the BRA should be like walking into an apple store : serve the customer. We should utilize technology to make the BRA’s services more user friendly. There should be a time limit on all BRA Board members. we should know how the BRA plans to create jobs and housing.”

Even stronger was Ross’s answer : “Remove all affordable housing plans from the BRA. We shouldn’t decentralize the BRA in the middle of a building boom, but affordable housing must be the first principle of any developer’s plans.” Conley’s answer was also memorable : “the BRA has a lack of predictability, accountability, transparency. I will publish all BRA decisions on my website. Splitting the BRA would hurt its effectiveness.” 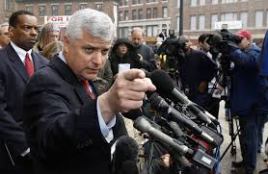 ^ Dan Conley : no big vision, but much useful reform

As these answers make clear, the candidates are divided on whether planning should be a separate process from that of BRA approval. The voters will have to decide that one for themselves.

On the permitting and licensing process, all of the effective speakers agreed that it takes far too long to navigate the process and costs far too much to get so many city agencies to sign off a plan. Ross said it best : “We need less bureaucracy ! in this city it should take 30 days — no more — to get a business permitted. No business owner should have to call an elected official to get his business open !” Walsh added this : “27 permits to get an outdoor vending business licensed. That’s just not right !” Arroyo made much the same points, though more gently. You could hear the frustration in Ross’s and Walsh’s words; clearly they have heard horror stories galore from business people in Boston.

^ Mike Ross : “restaurants are ambassadors for a neighborhood.”

The candidates were asked if they support Councillor Ayanna Pressley’s home rule petition to the State legislature to have all of Boston’s Licensing Board appointed by the mayor; under current law, the Governor appoints a member. All the “major” candidates said yes, but Ross’s answer stood out. It just might have been the best by any candidate to any question posed : “Must say to you that the legislature is very reluctant to give this power up. But restaurants are ambassadors for a neighborhood. If people are visiting a neighborhood in the city and can’t have their hosts take them to a local restaurant because there isn’t one, that hurts the neighborhood.” On which point Arroyo noted that Mattapan, for instance, has almost none of the 1000 liquor licences in Boston, ‘and,” said he, “that’s just plain wrong.”

^ Arroyo : the people’s candidate. And why not ? it worked for Scott Brown.

Finally, the candidates were asked about funding for small neighborhood businesses. Here Walsh gave the most effective answer : “Small banks need to give back to the community they’re in. The Mayor can make a difference by picking where the City deposits its money.” Arroyo noted that he has legislation filed to require banks to disclose how much and where they lend out money into the neighborhood they serve. Connolly made his own characteristic, tech-savvy point : “We should be talking equity investment, not just lending, to be available to local businesses. Call it a ‘buy Boston’ program.”

So there you have it. Connolly sees the Mayor as the director of an Apple store and maybe the entire Apple business, too. Walsh’s Mayor would bend city agencies to the needs of the construction boom and the businesses it is empowering. Arroyo as Mayor will serve people where they live, informally as they live, and make these living informalities his priority. Dan Conley will work quickly to de-mystify the arcane ways of City Hall and City planning. And Mike Ross will do much the same as Arroyo, but with a broader vision that includes developers as well as informal people.

^ “traditional” Marty Walsh : authority and command even at a new-Boston Forum

Ross was the evening’s good surprise. I did not expect him to give voice as eloquently as Arroyo to the frustrations that average people have with City Hall: but he did so. Arroyo spoke from the heart; Ross spoke from the heart and the head; his is the true voice of classic urban progressive reform in this campaign, a voice that recalls the great urban reform speakers of a hundred years ago. Unfortunately for Ross, there aren’t all that many 2013 voters who speak, or respond to, the voice of classic urban reform.

The evening also surprised in a bad way :

Rob Consalvo spoke much too quickly and lowered his eyes most of the time. He needs to look up and speak deliberately; say less words, more meaning.

John Barros disappointed. We had heard that he has the most eloquent vision of a city in progress; at this Forum he retreated from boldness to a kind of guy-next-door friendliness. That persona might elect a City Councillor; as a would be Mayor it failed.

Charlotte Golar-Richie continues to see herself as an administrator — more capable than the current, but an administrator most of all. That is not a message to win votes. Voters want an advocate, not a manager. The Mayor can hire managers.