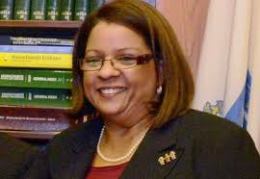 ^ why is this woman smiling ? Olga Roche has resigned as DCF’s boss

The big news this morning in Boston is that DCF Commissioner Olga Roche has resigned.

This was a certainty, once House Speaker DeLeo demanded it. Yesterday he did just that, at a press conference at which he angrily insisted that she go. The deaths of two more children in DCF (Department of families and Children) oversight had nothing to do with DCF budget cuts, said DeLeo.

The failures at DCF have become all too tragic and known to all. We at Here and Sphere have called for the entire DCF system to be re-configured and upgraded. DCF’s methods are out of date, its technology 20 years behind the times at least, its staff communication hit or miss, its management slow to act. All of this can be changed, renovated, transformed. Can be and must be. 100 million in DCF budget cuts must be restored. The mandated case load limit for social workers must be enforced.

The resignation of Olga Roche will achieve none of that. Who will now run the agency ? No one with any career prospects would dare to say yes.

Some blame Governor Patrick for the failures of DCF and, in particular, for not firing Olga Roche sooner. I don’t agree with them. Governor Patrick knew well that firing Olga Roche would do nothing to make DCF a more responsive agency. The governor’s best course was, and still is, to set in motion a comprehensive review of DCF practices, recommend big changes, and then implement them.

The media are full of reports that DCF staff missed meetings with parents, misplaced faxes — faxes, in the age of twitter ! — missed communication, sloppy oversight. All true. But let’s remember that the families that DCF monitors are highly dysfunctional : drug abusers, neglecting their children, homes filthy; a mother who usually does not work and probably can’t, who lacks basic skills and isn’t attuned to keeping appointments or making them. It’s terribly difficult to get things done for, with, or by way of people in this state of advanced social crisis. A very high degree of pro-active social work is needed, backed up by very pro-active supervision.

Olga Roche has left the job even as I write. Her leaving satisfies the political imperatives, but it will, by itself, change absolutely nothing. It may even deceive the public into thinking that it was all Roche’s fault and things will now be much better. This would be a big mistake.

*** UPDATE : today Governor Patrick named Erin Deveney, a veteran manager at the RMV, to be interim head of DCF ***

The other big news concerns the Boston area casino license. Until recently, I felt quite certain that Steve Wynn’s Everett plan would easily beat out Mohegan Sun’s Revere project. Now I’m not so sure. The land upon which Wynn wants to build is owned, it seems, by at least one person with a criminal past, and, as it was once a Monsanto chemical Company facility, is filled with extremely toxic waste. The waste can be cleaned; the criminals, not so easy.

The named criminal, one Lightbody, says that he sold his interest in the Monsanto site long ago; but the Boston Globe reports that one of the present owners refuses to sear an affidavit that no current interest is owned by a person with a criminal record. the same Boston Globe report quotes Lightbody as having ownership of a nearby — and quite infamous — strip club “wrapped up tight.”

It’s all quite seedy, and given the public perception of casinos as havens of criminal money, it cannot be good news for Steve Wynn. Nor is the talk of high-price land purchases by the City of Everett, taxpayer paid.

This the momentum shifts over to Mohegah Sun and the City of Revere. First, the land on which Mohegan sun plans to build is already owned by their Suffolk Downs partner. To my knowledge, it contains no toxic waste. second, the City oF Revere has inked mitigation agreements with many communities (to be fair, so has Steve Wynn), with the prospect of more. The voters of Charlestown and Chelsea strongly support the Revere plan. So, too, does Mayor Walsh, although of late he has bargained for a host-community mitigation agreement rather than the smaller sum due a mere adjoiner. And though Revere’s recent casino vote produced only a 2 to 1 approval, as oppose to the 9 to 1 vote in Everett, Mayor Dan Rizzo has pushed every button available to make Revere’s “Yes” a loud one.

Mayor Carlo deMaria of Everett, no amateur in the pressure push game, has pushed back. Last night the Everett city council voted 10-1 to approve the Mayor’s Lower Broadway urban renewal plan, upon which the Steve Wynn casino projects depend and which includes a $ 35 million purchase of the Monsanto site (then to be resold to Wynn at the same price). Lower Broadway in Everett is a hotch-potch of industrial usages, non-use, blight and ugly. Renewing it to accommodate Wynn’s gleaming-glass, swimming pool and diamond dreams palace would sweep all that blankety-blank away. It’s a strong argument, and last night it won.

For deMaria last night’s vote was a crucial step toward victory. He will need many more, and these will be much, much harder to win. Mohegan sun is definitely in the game. Six months ago, i would not have predicted it.