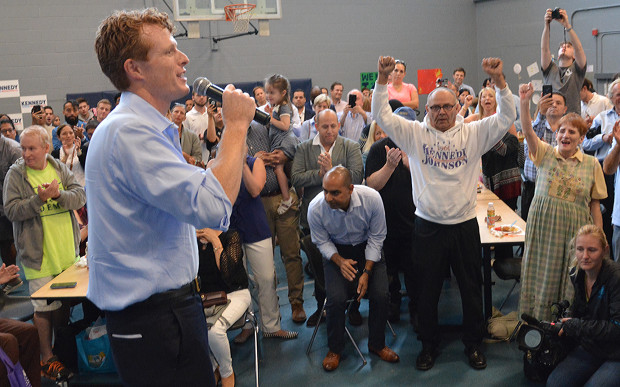 ^ Joe Kennedy III goes to East Boston, where his ancestor first landed in Americva, to announce his Senate candidacy

Almost certainly Joe Kennedy III, currently the 8th District’s Congress,an, will win his primary fight against Senator Ed Markey. Polls show him way ahead — show Markey shockingly unknown among Democratic primary likelies –and they could easily favor him more and more. Yet Kennedy is running a campaign — from the Left — quite foreign to who he actually is. Why is he doing this ? The hard-core left isn’t going to support him; many are hitting him with the dreaded “entitled” epithet — and to be fair, he is, as a Kennedy, most definitely entitled in the eyes of most of our voters — and are flocking to the side of the ancient-looking, career politician Ed Markey, the very embodiment of what the Left recently has salivated to run against.

Why is the Left doing this ? Especially when Joe K has done everything but change his name to Bernie in assuring the Left that he supports its entire wish list, from medicare for all to “environmental justice,” whatever that is,  to the so-called Green New Deal, a double shot of  layer cake of “climate Crisis” and “public transportation whether you like it or not.”

But maybe the Left has a point. Do you believe Joe K actually supports these things ? I don’t. The Kennedys have never adopted wish-list positions. It was Ted who, explaining why he was never unwilling to compromise with opponents,  famously quoted Voltaire’s dictum that “the perfect is the enemy of the good.” Before Ted there was John, a centrist Democrat who often politicked more like a Yankee Republican than the Irish Democrat he was. And of course there was Robert, who in his tragic 1968 campaign pushed aside the Vietnam protest candidacy of Eugene McCarthy in favor of his own nuts and bolts, labor union and civil rights priorities.

Like Ted, Joe, if elected to the Senate, may well espouse the Left’s wish list;but if he does that, can anyone doubt that he will seek compromise, not conquest ? I suspect that the ultras now embracing the ancient Ed Markey rather than the candidate of their generation — in contrast t,o what many did during the Ayanna Pressley and Mike Capuano fight — see the same vision that I see : Kennedy won’t “die on their desired hills,” as one of the currently trendy political phrases has it.

I feel very confident that the Left has it right : that Kennedy is not their champion, albeit he likely shares their desire for reforms — just not as many reforms, nor as drastic. Kennedy’s campaign apparatus and vote base, no matter what he says, will almost certainly be private industry labor unions and centrist primary voters generally as well as the Kennedy family’s still huge personal following. As such, I’m inclined to support him rather than Markey, who has embraced the Left’s grossly expensive public programs, not to mention how those programs will accrue to Washington yet more of our money and yet more authority over our daily lives.  Personally, I think Markey’s effectiveness as a leader of the climate-crisis Left is overrated. Others are the actual leaders, and Markey’s move into the climate world feels like catch-up. Sincere, his move surely is; it gives him a mission that suffices beautifully because it will never be achieved, not if he were to live to be 100 and serve six terms until age 98. Politicians love to advocate issues popular with their base but that can never be achieved, because the advocacy, not the accomplishment, is the thing. Accomplish your mission, and you’ve done your work — NEXT ! Much better to pursue unfinished — unfinish-able — business.

But then, if you’re unlucky, along comes a young Kennedy….