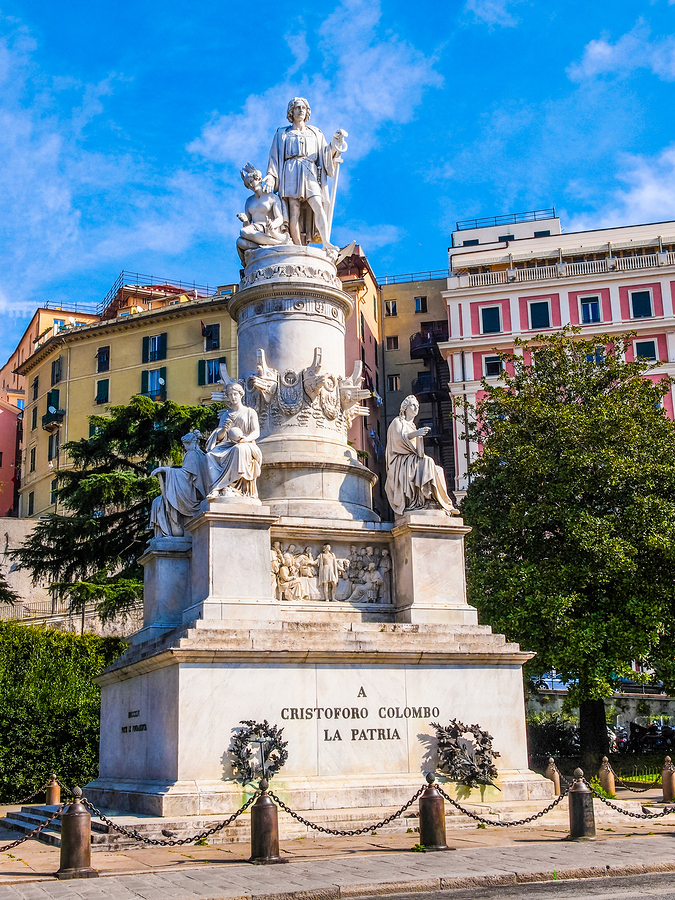 in Genoa, statue honoring Cristoforo Colombo, whose birth day we honor — for fundamental reasons of inheritence and example

My Mom was born on October 12 in Dr Morrison’s patient care room at 80 Princeton Street in East Boston.

So even though I am not of Italian heritage by family, I am so by inheritance & location.

I have visited Genoa, Cristoforo Colombo’s home city (some say he was from an outlying area, not in the City prtoper, and definitely of humble merchant descent) , and it is beautiful & of a noble and combative history. Genoese seamanship and daring had a long history already behind it when Colombo made his mark.

He commanded a voyage of exploration on behalf of the king of Spain, but his boldness was Genoese. 500 years before him, Genoese seamen in their spunky little galleys, in alliance with seamen from Amalfi and Pisa, beat back the Saracen pirates who had all but closed the Medierranean Sea to commercial traffic. 300 years later a Genoese Grimaldi took possession of the Rock of Monaco — and his descendants still govern it today.

In that tradition sailed Cristoforo Colombo and his intrepid followers in their three tiny galleons. His and their discoveries changed the world, and we are here as a result. Columbus Day is America’s gestation day, and I honor it and him and the magnificent spirit of imagination, commerce, artisanship, municipal freedom and governance, and adventure that defined Italian civilization — and Genoa in particular — of the 11th through 16th Centuries.

We too are a commercial nation and, like medieval Genoa, governed, mostly, by a commercial and hard-working, often artisan citizenry. Our very national name — America — honors another Italian, Amerigo Vespucci of Florence, yet another city led by commercial men, artisans, adventurers and — Florence’s special obsession — lovers of art and literature. These, too, have come down to us here in Amerigo Vespucci’s nation as an inalienable part of our national character and inspiration.

Perfect, Columbus was not, nor were any of the Genoese and Florentines whose civilization we are the inheritors of. Columbus was cruel; the most dominant Genoese leaders were hard-headed, artless bean counters; and the Florentine big shots nursed indelible family feuds even as they funded immortal art.  But no human endeavor is free of the bad genes within it — within us all. We must be governed by our better natures despite all, and despite all, Columbus and his fellow Italians of the discovery era founded the world in which we as Americans do our best, most of the time, to live up to the heritage of those bygone cities of invention and opportunities seized.